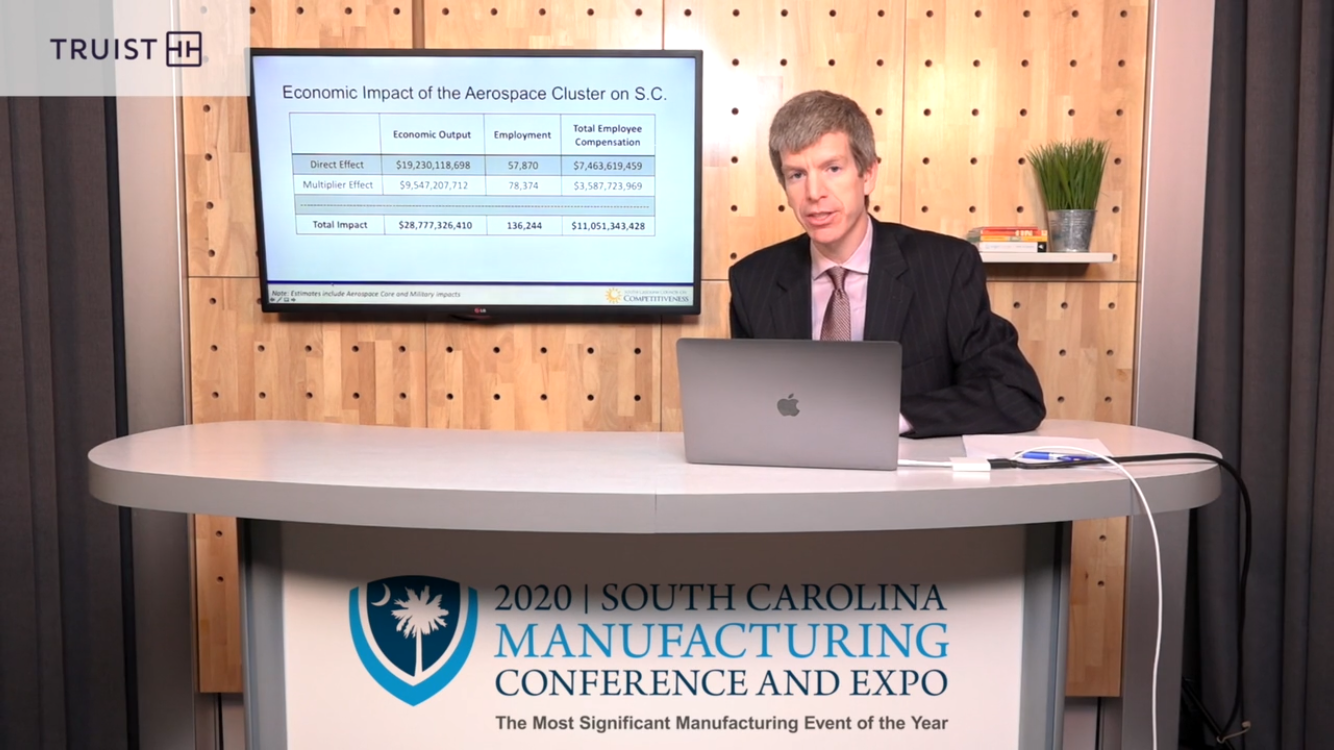 Correction: This article previously attributed the 2020 Aerospace Economic Impact Study to the University of South Carolina Darla Moore School of Business. It has since been corrected reflect that the S.C. Council on Competitiveness commissioned and released the study.

Even before Boeing’s recent announcement to move additional production to North Charleston, South Carolina’s aerospace industry had continued to drive employment and economic growth at a much higher rate than most other manufacturing sectors in the state aside from the auto industry, according to a study commissioned and released today at the S.C. Manufacturing Conference by the S.C. Council on Competitiveness.

Boeing contributed to 4.1% of the increase. In 2019, 22,785 people across the state were directly employed by the aerospace industry but the ripple effect created by the industry’s presence is expected to have indirectly helped create 39,301 additional jobs. That’s 62,086 jobs generated overall, as aerospace jobs tend to generate a larger economic impact on the wider community than others because of the potential for high wages and the sector’s creation of supplier clusters in one geographic location.

“For every 10 jobs that are created by aerospace-related companies, we see another 17 jobs created elsewhere in South Carolina as a result of these secondary multiplier effects,” said Joey Von Nessen, S.C. research economist with the University of South Carolina’s Darla Moore School of Business, adding that Charleston and the Upstate lead the way in terms of aerospace core employee concentration. “Aerospace has the ability to scale up employment in a way that few other industries are able to match.”

South Carolina’s aerospace industry helps support an estimated 136,244 jobs overall and create a $28.7 billion economic impact overall in the state. Currently, 57,870 jobs directly stem from the sector and are compensated with $7.4 billion, according to the study. Tax revenues from the industry have reached $734.6 million annually, while its overall impact is expected to contribute $14.1 billion to South Carolina’s Gross State Product.

Aerospace firm growth is also continuing to expand over time at a 5.8% growth rate, with private aerospace core companies contributing 45.6% of the industry’s economic impact. Military manufacturing and other services comprise the other 54.4%.

He said for the state to get a leg up on other aerospace clusters across the country, such as Washington State, South Carolina must boost its supply chain presence for auxiliary manufacturing and other aircraft parts. Right now, aircraft engine and engine parts production are the strongest parts of industry growth at a 17.9% increase since 2010, followed by the manufacturing of entire aircraft at 12.3%.

If the state’s supply chain was scaled up on a level similar to Washington State based on its current level of manufacturing, South Carolina would see a 10% increase in aerospace employment growth overall or 6,438 jobs.

According to Steve Townes, CEO of Ranger Aerospace, the Southeast is the strongest aerospace cluster in the world in terms of growth and supply chain aggregation. South Carolina, located in a central location with access to a port, is poised to be a hub in the region’s aerospace industry machine.

“I said something somewhat radical about five years ago,” Townes said during today’s keynote. “I said in 10 years, I said Charleston Harbor is going to look just like Puget Sound. And I meant that figuratively about jobs growth and jobs migration. And what’s we’re seeing now: it’s smart business by Boeing to do what they’re doing. And it’s also essential because of the overall impact of COVID on the entire air transport industry worldwide.”

Small and medium-sized companies are leading the charge in terms of supply chain aggregation— or the creation of a regional aerospace cluster — which includes manufacturers and suppliers, as well as aftermarket maintenance enterprises. Workforce development also serves as a keystone in helping South Carolina become a fixture in the international aerospace industry, starting with high school curriculum programs and — as pointed out by speaker Susie Shannon, CEO and president of the S.C. Council on Competitiveness — even aerospace exhibits in a children’s museum.

Since the implementation of high school aviation curriculum four years ago, according to Townes, seven high schools now offer students the opportunity to dip their toes into one of the state’s fastest growing industries.

“I think it’s really incredible,” Stephen Astemborski, director of S.C. Aerospace, one of the council's industry clusters, said during today’s discussion. “We’re not just a national leader; we’re becoming an international leader, and I think that’s just a testament to the hard work that our state has done to build the infrastructure, to attract the businesses, but it’s really a testament to the workers that come in day after day, whether they’re building jets or they’re building commercial widebody aircraft or they’re servicing aircraft, retrofitting aircraft.”