Order of the Palmetto awarded to Upstate airport director

The longtime director of Greenville Downtown Airport has awarded the Order of the Palmetto, the state’s highest civilian honor. 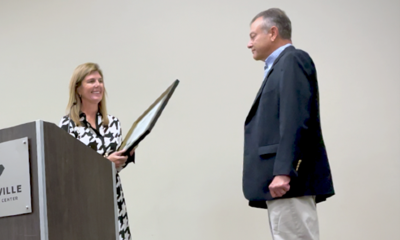 Lt. Gov. Pamela S. Evette presented the Order of the Palmetto to Joseph R. Frasher on behalf of Gov. Henry McMaster at a Sept. 15 ceremony in the Greenville Convention Center.

The order is awarded to state citizens to honor a lifetime of service and achievements of national or statewide significance. For Frasher, it honors 39 years of service to the state as the GMU airport director.

Frasher, who graduated from Greenville High School in 1975, always loved aviation and wanted to be a pilot, the news release said. He pursued a degree in airport management from Auburn University but realized that all the management positions were filled by World War II veterans. He decided he would try law and graduated from the University of South Carolina, obtaining his juris doctorate in 1982. He was not happy practicing law and jumped at the opportunity at GMU when the director position opened in May 1983.

His accomplishments as the airport director of GMU for 39 years include installation of an FAA contract tower that helped make GMU the state’s busiest general aviation airport. He installed the first Engineered Material Arresting System (EMAS) at a general aviation airport in the United States, a decision credited for saving the lives of five people when a plane’s brakes failed in 2006.

Frasher served in numerous leadership positions for Greenville and the state, the release said. He was instrumental in helping the planning and development of the Pleasantburg corridor, making sure that GMU is a gateway for businesses and families. To give families a window into aviation, he created an airport that gives the community a reason to visit, through the Runway Café, MHCC Military History Museum, and Take Off Mini Golf.

“It has been a wonderful 39 and a half years,” he said in the news release. “I had the job of my dreams. Nobody stays at a job this long anymore but the commission has been kind enough to let me stay. I enjoyed every minute of it and I am thankful for all the relationships that I have made with so many people because of this job”

The Greenville Downtown Airport is home to more than 40 aviation related businesses and tenants, accounting for 547 jobs and contributing more than $68.8 million to the Upstate economy, according to GMU.