Damage from 25 tornadoes that ripped across the state on April 13 has cost one of South Carolina’s largest industries $4 million. 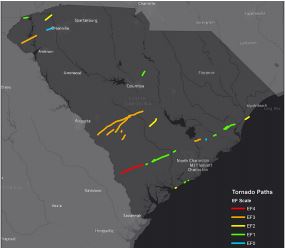 A survey by the S.C. Forestry Commission found that more than 42,000 of the 64,000 acres studied were damaged by heavy winds, according to a news release. Fewer than 4,300 acres need to be reforested as a result of significant damage, with Hampton, Oconee, Orangeburg, Colleton, Berkeley, Marlboro, Greenville and Aiken counties accounting for 95% of all timber losses.

“From a statewide perspective, $4 million in timber damage represents far less than 1% of the state's total timber value,” State Forester Scott Phillips said in the release. “But for those landowners who were adversely affected, the damage has a very real negative impact. So our focus right now is providing technical expertise to individual landowners and helping them access any federal financial assistance that will be available.”

The Farm Services Agency’s Emergency Forest Restoration Program will offer assistance to landowners who suffered damage during the tornadoes, while some may also qualify for the Emergency Conservation Program, according to the release.

According to the S.C. Forestry Commission, forestry sustains 90,624 jobs with $4.1 billion in payroll across the state. By volume, more timber is exported out of the Charleston ports than any other product, according to the commission.