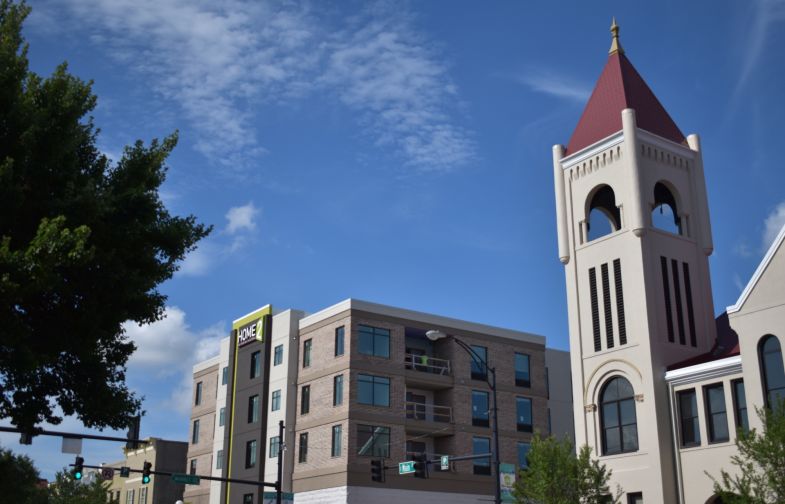 The construction of Anderson's downtown Hilton has been a joint effort between the city, county, developer Main at Market LLC and several contractors. (Photo/Molly Hulsey) 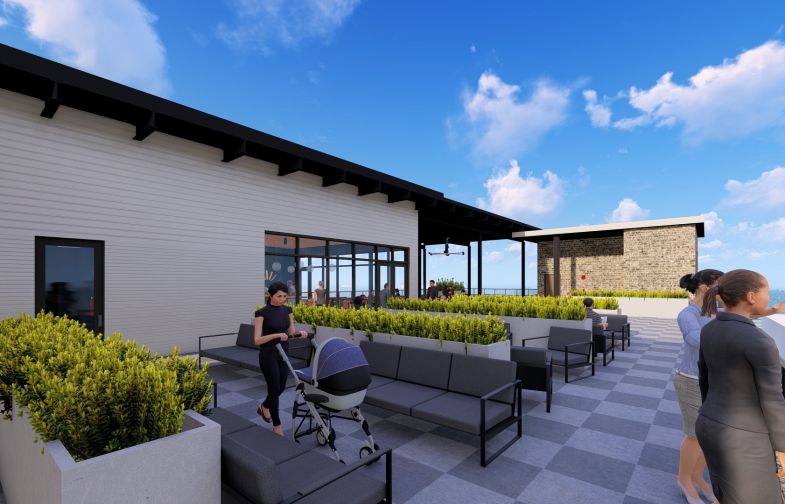 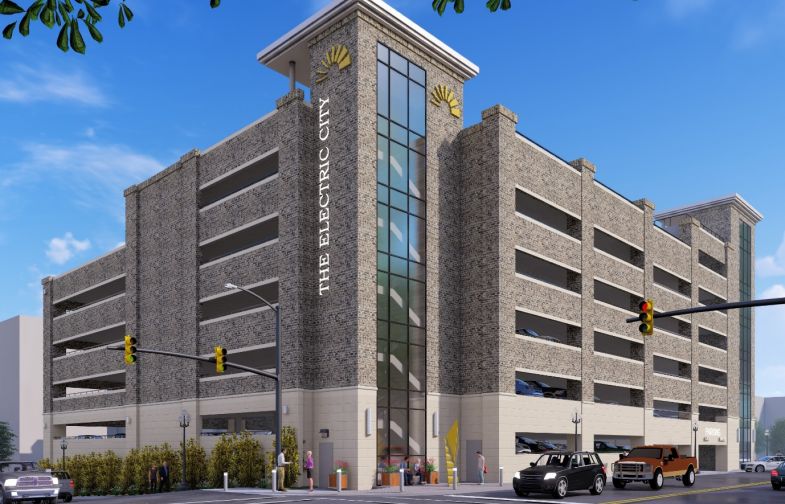 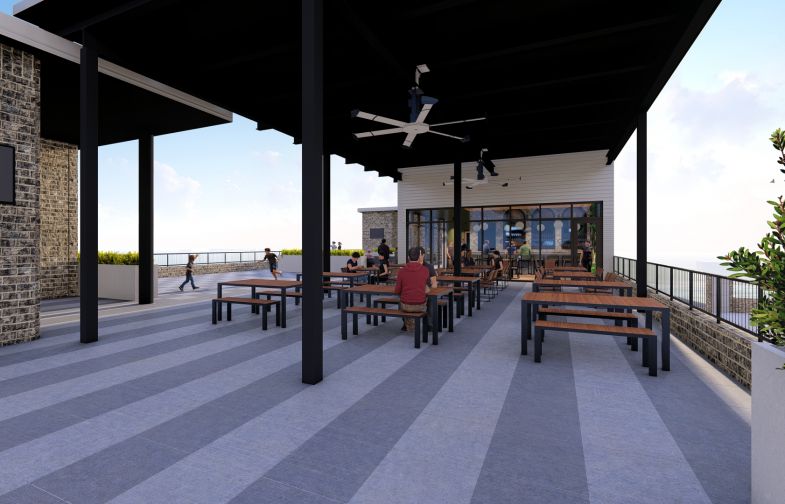 Assistant City Manager Andrew Strickland said that the city was in the process of deciding on a tenant for the garage amenity deck. (Rendering/Provided)

This story first appeared in the July 26 print edition of GSA Business Report.

The skyline vantage point from the top of Whitney and Murry Street Garage draws amateur photographers and regular gatherings even when they aren’t supposed to be there, said Anderson Assistant City Manager Andrew Strickland.

“We have to chase people off the top of the garage,” he said. “Because it is such a good view, people want to hang out up there, watch the sunset, take pictures. It wasn’t built to the assembly portion of our building code, so technically, we can’t allow people to assemble there.”

But that is how he knows there’s pent-up demand for the rooftop bar that will soon crest the incoming eight-level parking garage on McDuffie Street and Market Street.

At the time of the interview, he couldn’t share who will taking the perch, but he said the pick among several clients vying for the venue could be announced as soon as July 19.

The $9.4 million McDuffie Street parking garage designed by McMillan Pazdan Smith will hold 320 vehicles, including visitors to another public-private partnership Strickland said will be a boon for the city: a nationally-branded hotel with about 5,000 square feet of retail space at the face of South Main and East Market streets.

The addition of Home2Suites by Hilton to the boutique Bleckley Inn along South Main makes the area Anderson’s accommodations district and sets up the city for “what it wants to become in the future, which is the most desirable city in the region,” Strickland said.

“This is a tipping point for us,” Anderson Mayor Terence Roberts said in a statement following the announcement of the brand in 2018. “Bringing a name-brand hotel to our downtown, and the complex nature of working with a national franchise is new to us. We are already on the radar of regional and national players, and the spotlight on us just got brighter with this key development on our horizon.”

Home2Suites is one of Hilton’s fastest growing brands in the country, according to Strickland, who serves as the city’s project manager for the development.

“And I think post COVID, that’s even going to accelerate. We’ve heard that from several of their locations,” Strickland said. “It is extended stay and you have to request housekeeping. It is kind of hands off from a traditional hotel perspective, which now, that’s the name of the game.” 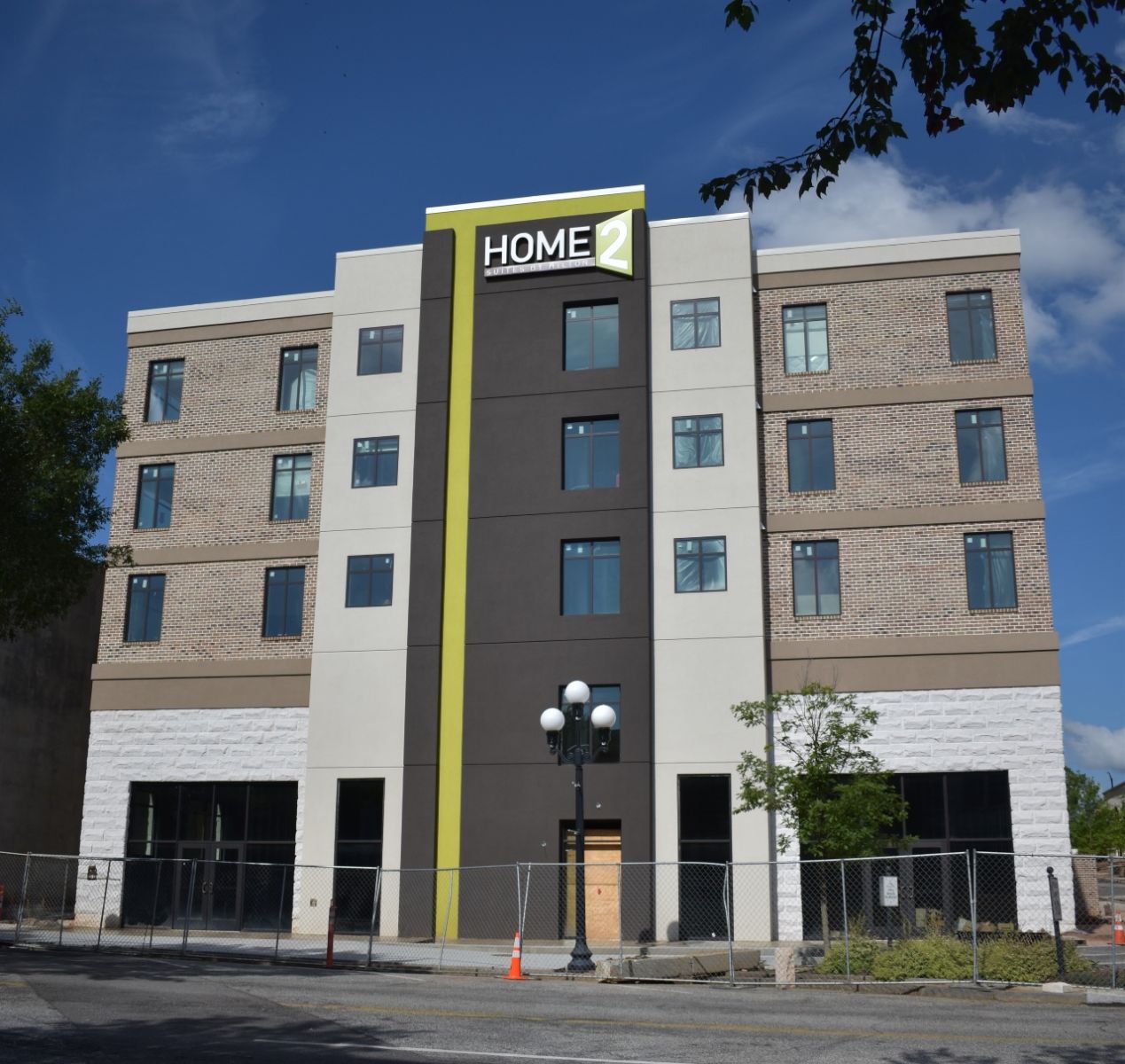 In a time that hotels are still playing catch-up to more than a year of empty floors and untouched beds, the extended stay venue Home2Suites by Hilton will answer the Anderson market’s demand for corporate visitors, traveling nurses, audit accountants and other traveling professionals in town for a week or more, according to Strickland and Brad Marisco, vice president of sales and marketing of the venue’s management group Paragon Hotel Co.

“With all the manufacturing plants and businesses that are in the area, we feel that downtown has a need for that with the dining and the shopping and the nightlife and stuff that Anderson now has to offer,” he said.

The Anderson-based hotelier, headed by Founder Ricky Patel and President Mitesh Patel manages seven hotels within the county and dozens of franchised hotels across the Southeast.

The company partnered with Greenville developer Steve Timmons under the name Main at Market LLC to embark on the roughly $13 million project, according to Strickland’s estimation.

Set to conclude near Aug. 20 under the direction of general contractor Van Winkle Construction and site contractor Fontaine Construction, the hotel will house a 1,200-square-foot meeting room and boardroom for events alongside its 87 guest rooms and swimming pool.

The hotel’s promise of event space has already attracted reservation queries about the space for weddings, reunions and corporate meetings.

“Any time a downtown area can offer dining, shopping, residential — there will be more condos down there than there are now — there’s a larger hotel that is branded, any time you see that going in any sort of downtown development, I think that just speaks volumes for what is going on … in the neighborhood,” Marisco said. “It’s something to hang our hat on.”

Initially, few believed there could be any way the city could fit both a hotel and new parking garage on the same block, according to Strickland.

Building up made that possible, as have the partnerships between the various construction teams, city, county and Main at Market LLC as the hotel interior is fleshed out and the city streetscape project, including widened sidewalks and shade trees for pedestrians, concludes.

“We have worked in lock-step with the county and the developers to make this happen,” Roberts said in the original announcement. “Economic development projects like this require a high degree of cooperation and a shared vision.”

From the window in Strickland’s city hall office, he too said he is “continually amazed” by the view of three contracting crews working in tandem within the confines of a single city block.

“All had to work together and schedule back and forth and accommodate each other,” he said. “It’s been a dance, it’s been a ballet, and here we are at the end.”