Like a lot of people in town, long-time Travelers Rest resident John Carroll didn’t know his hometown was named after the Victorian-era pad of a late neighbor.

At least until the Green Build executive took on the job of transforming her home back into an 1800s-era inn — and in the months ahead, a community center, museum and events venue on the Swamp Rabbit Trail. The project is one of myriad Upstate historical preservation and conservation projects kickstarted by the S.C. Conservation Bank, the mother of Greenville County’s newborn Historic and Natural Resources Trust.

Carroll regrets that he never had the chance to meet Nell Anderson Gibson, the last descendent of Robert Anderson, one of the men who brought the Swamp Rabbit Railroad to the town (and past his inn). But since Gibson put the property under a conservation easement before her death at 89, the contractor has acquainted himself with her home as Gibson’s ancestors knew it.

“It was really just a bit of committee work and a lot of measuring,” Carroll said. Guidance also came from similar projects from the time period to use as a blueprint, as well as existing records, all overseen by the Greenville County Historic Preservation Commission.

When GSA Business Report first met Carroll, he was measuring a new column for the Spring Park Inn front porch that twinned tapered pillars featured in photos from the house’s stint as a stopping-off point for Swamp Rabbit Railroad passengers from 1852 until 1941.

Prior to that, the home was haven for Carolina elite seeking to escape the “heat and malaria” of the Lowcountry summers, according to Kyle Campell, owner of Preservation South — one of the organizations that made the 20-acre restoration project possible alongside the work of the Travelers Rest Historical Society, Upstate Forever and the S.C. Conservation Bank.

Today, the exterior of the house is almost complete, Carroll said, with some construction still underway on the inside. A finished home, barring decoration for the museum’s interpretive space, is expected by the end of the year.

The 20 acres surrounding the home, many of them now leased to a driving range, were once a centralized park space for the town, according to Campbell. In accordance with Gibson’s wishes to give the traveler’s rest stop, well, back to Travelers Rest, plans are underway to  transform the property back to its original use through fundraising and public-private efforts.

“We really think that it’s an exciting opportunity for the community to have this greenspace, the house and all of its history right there in the center of town,” Campbell said.

Trust and keep your powder dry

It’s an opportunity that the founders of the Greenville County Historic and Natural Resources Trust hope to see more of as the new funding pool broadens over and launches its public committee meetings.

“Well-thought out, planned progress is good,” Doug Harper of Harper General Contractors told GSA Business Report. “It’s going to happen. You can’t stop progress. Let’s do it the right way and protect the special places as much as possible, so they are there for future generations, because once they’re developed, they’re gone forever. We need more trails and parks and open spaces.” 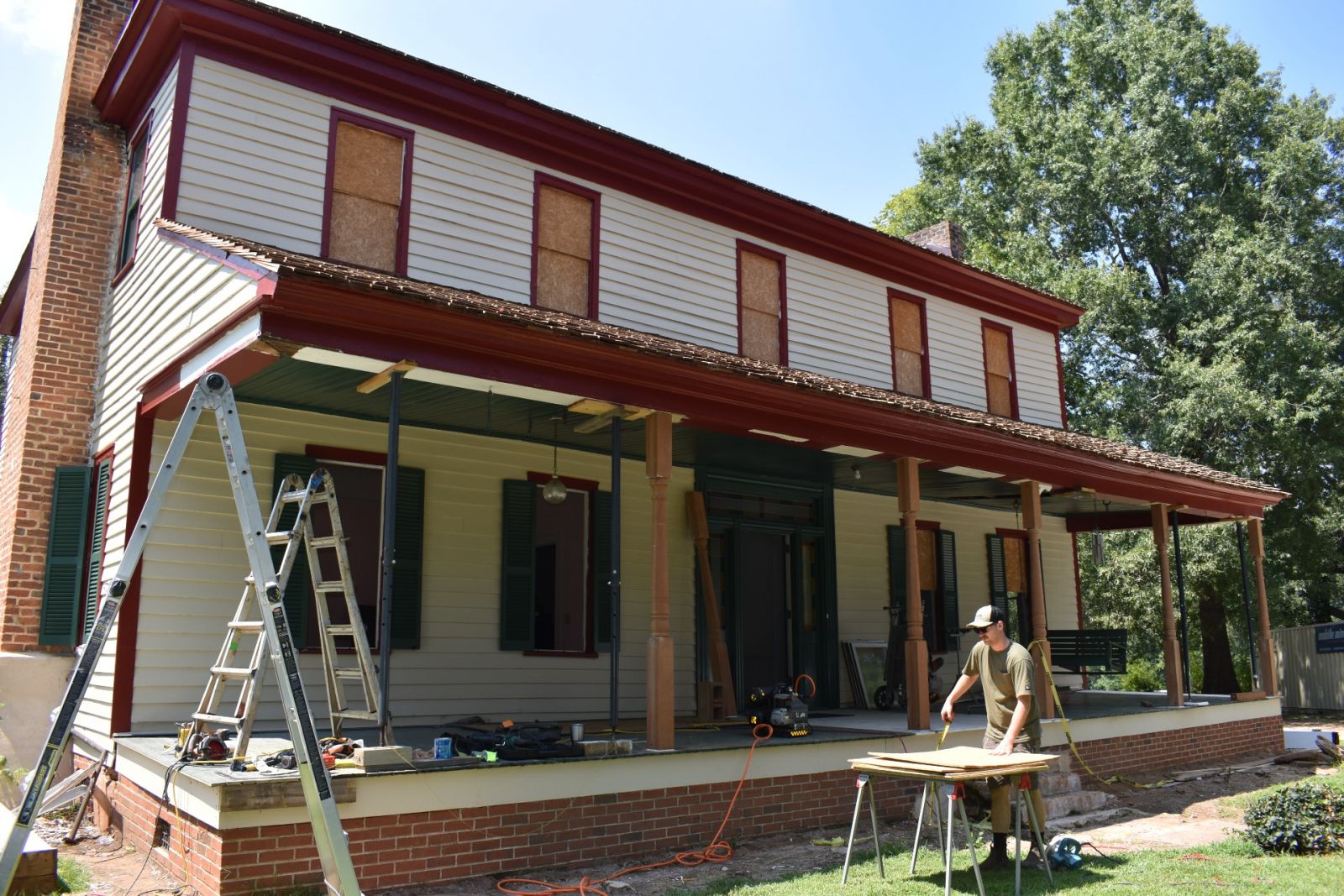 S.C. Conservation Bank Executive Director Raleigh West and Harper, the bank’s former chairman, have been mulling over how to do that in an ever-booming Upstate for years.

In 2020, their vision blossomed into reality when the Greenville County Council voted in December to create the land trust’s board, and despite some budget disappointments, plans for the trust clipped ahead into the new year.

“Which is basically a contract between a landowner and a land trust nonprofit or the government, but usually a nonprofit organization, like Upstate Forever here that’s pretty prominent, where they would donate a conservation easement to save interest in real estate,” West said.

Properties with natural ecosystems, open space, historical value or public access under a conservation easement can continue to be used by the landowner for farmland, as a homestead or other limited purposes, but, according to IRS tax law, cannot be sold off or divided for commercial or residential development. This contract is permanent and is passed forward along with the deed when ownership changes.

“It carries more impact when you say, ‘in perpetuity,’” said Harper. “Which means forever.”

Conservation easements carry with them tax incentives, but funding from the conservation banks, the Greenville County land trust or other sources help compensate the landowner for some of the value lost from the property’s appraised fair market value due to property-use restrictions. Possible property uses differ from property to property. Each easement is tailored for the situation, according to West.

“There are certain programs in the counties, and the state conservation bank, which I now direct, to help provide the financial incentives, so that it’s not just financially beneficial for the people who have the income and assets needed,” he said. “It opened it up to a much broader pool of landowners.”

It takes a village

As the Greenville County Historic and Natural Resources Trust ramps up to hold its first public board meeting in the months ahead, in late August, Harper, chair of the trust board, said it plans to launch its website in the even nearer future.

“We’re moving very fast, because the ordinance was passed in December,” he said. “Then we had to go through the normal board process of interviews and then the council voted; the board was set. It all happened very quickly, and subsequently we had our first called meeting.”

Landowners and conservation entities will have deadlines in August, November and April to submit grant applications for their properties, but Harper had not announced the first grant meeting for this year at the time of the interview.

“Almost all of our grants will be matching grants,” he said. “Very rarely will we fund a total incentive grant or a piece up for purchase. We’re going to use leverage just like the state does. … It takes a village.”

While the $2 million over two years allocated by the County Council in July was just a hint of the $10 million initially requested, Harper and West expect the investment to snowball once their work is underway.

“We’re going to have some excellent results, I’m confident, and show Greenville County Council what a wise investment it is,” Harper said.