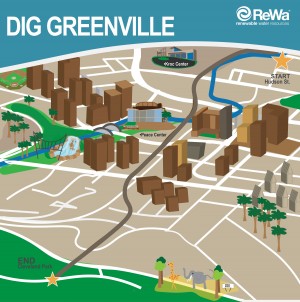 Renewable Water Resources announced the plan at an event Thursday morning that includes the below-ground tunnel spanning from Hudson Street to Cleveland Park. Graham Rich, ReWa executive director, said the project will not have a negative impact on sewer rates because the company included the project in its future capital needs plan.

Work on the project has yet to begin and officials said it won’t “for many months,” but the company wanted to release the information to the public “to be a good community steward.”

“We plan to create social media and web pages dedicated to the project; share information at town hall meetings; speak to community groups; engage the media and give updates via newsletters,” Rich said, in a news release announcing the project.

A primary reason for the project is that the system in place for the Reedy River Basin – which impacts from downtown Greenville to Travelers Rest – is nearing capacity. Rich said the Dig Greenville project “will be able to handle the basin’s needs for the next 100 years.”

ReWa officials said construction of the new tunnel will take approximately 30 months and will start in late 2017. Rich said the construction will have little impact on downtown Greenville other than staging areas set up near Hudson Street and Cleveland Park.

The project will include blasting rock at both ends of the tunnel which will be done in the first 12 months of the construction. Rich said those near the blasting sites will be given plenty of notice. The tunnel construction will be done with a boring machine that will cut the rock as it moves.

“As this project unfolds, we want all of Greenville to be excited,” Rich said. “Our first priority is letting the people of Greenville know what is happening.”