It can be considered the price paid for positive growth, but officials with Renewable Water Resources say their sewer project through downtown Greenville is a necessary component to help sustain any future population expansion in the county.

And, it was a decision that was not made lightly.

The estimated $46 million Dig Greenville project will add a one-mile gravity sewer tunnel 100 feet below downtown Greenville; and the primary reason is because ReWa’s system impacting an area from downtown to Travelers Rest is nearing its capacity.

Graham Rich, executive director of ReWa, said the company looked at 13 different options to alleviate the pressure on the existing sewer system. 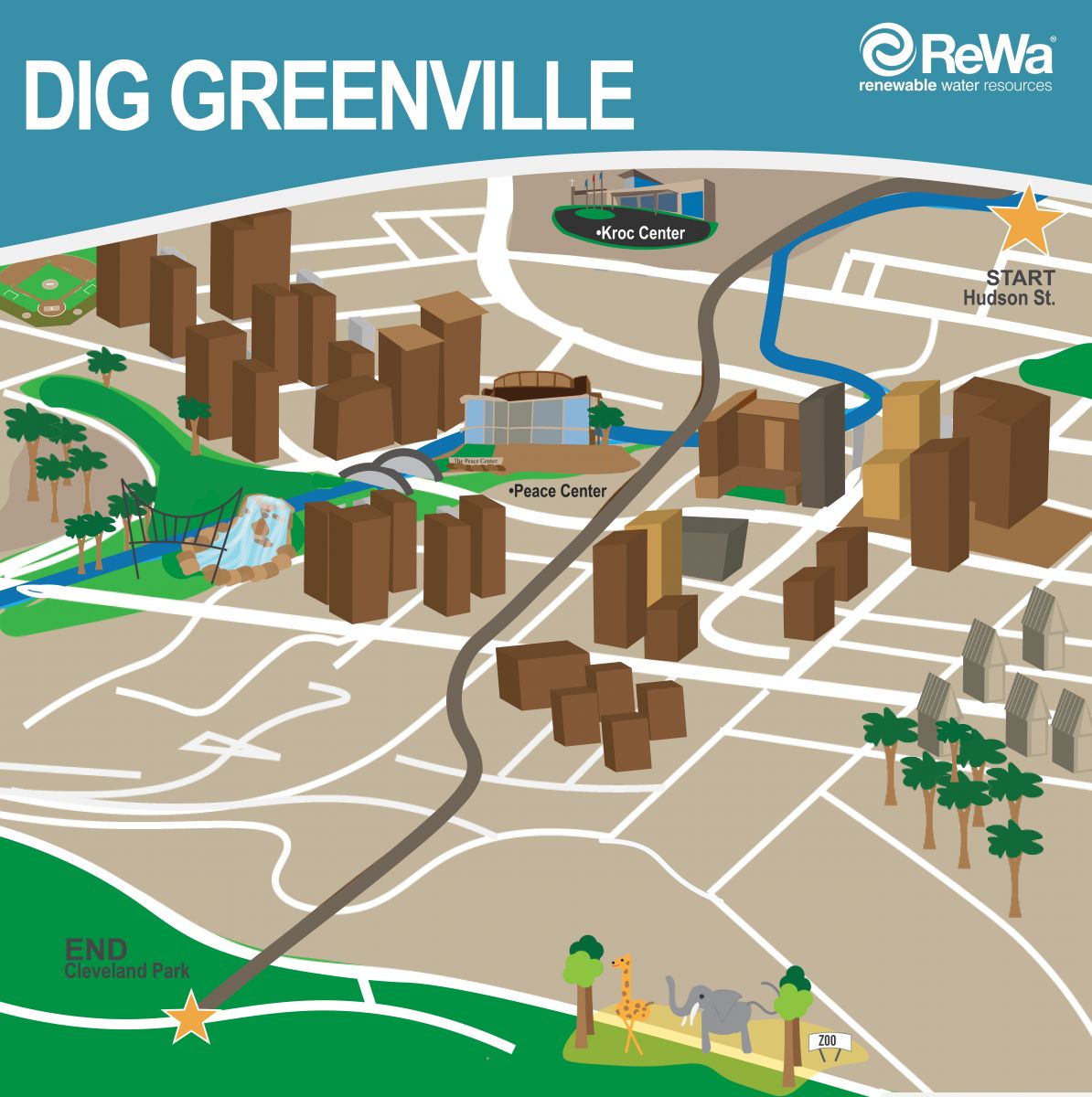 “When we look at the existing flows and the projected flows, it was the best option of the 13 that were evaluated,” Rich said, in an interview with GSA Business Report. “In terms of making sure that we don’t have overflow when it rains, this was the preferred option.”

One option looked at involved a different tunneling technique, but Rich said that would have been too disruptive to the downtown area. Rich said another option was to build a storage facility near Hudson Street, but that would not increase the line capacity, only change when the flow was released.

Ultimately, the tunnel from Hudson Street to Cleveland Park was selected as the best possible option and ReWa said the chosen project will add 100 years to the Reedy River Basin capacity. Additionally, Rich said there will be very little maintenance required once the new tunnel is in place.

Not only will the new tunnel help with sewer line capacity, but it will also act as a “storage vessel” for stormwater that would otherwise overflow to the surface.

It is all part of a larger plan for ReWa to improve its lines and increase its capacity. Initial estimates were that the company will have to spend between $700 million and $1 billion over the next 20 years to make those improvements.

“When you look at the cost, that is really where the difficulty is,” Rich said. “Fortunately, interest rates are at an all-time low and we do plan to take on some debt, but we plan to pay half of any future debt with cash and the other half with revenue bonds.”

The cost of the Dig Greenville project is not being passed on to customers as the company said it fit in future capital planning needs.

According to project manager Jason Gillespie, the gravity sewer tunnel will move wastewater without the need for additional equipment. Wastewater downstream from downtown will drop 100 feet into the new tunnel and flow by gravity to the existing sewer system at Cleveland Park.

“We started the design phase earlier this year and will be completed by May 2017,” Gillespie said, in a news release announcing the project. “Actual construction will take approximately 30 months and will start in late 2017.”

Rich said the tunnel will be in granite and well below the surface. He said the rock under downtown is perfect for this kind of tunnel.

The only noticeable thing to the public will be the staging areas near Hudson Street and the Reedy River and another at Cleveland Park.

While Dig Greenville is getting the most exposure, ReWa is undertaking other projects in the area to help alleviate capacity concerns. Another capacity-related project is around Richland Creek where the company is exploring options on how to increase capacity and plan for future growth in the area.

“All of these places are growing,” Rich said. “I have been amazed at the level of growth and what we are seeing in our system is not just horizontal growth in places like Simpsonville and Mauldin but also vertical growth that you are seeing downtown.”

He said other areas the company is looking at in terms of planning for future growth is northern Anderson County, Travelers Rest and areas around I-385. He said the growth issue is a good problem to have, but one that will require constant monitoring.

And, while the company is not planning to increase its rates for the Dig Greenville project, Rich said it is foolish to think that position won’t have to change as the company eyes keeping up with population growth.

“If you look at the amount of capital that will be needed to do these projects, there is no doubt there will need to be a rate increase,” Rich said.