Redevelopment starts on one of the world’s largest old mills

A hundred years ago, about 400 homes were built outside Woodside Mill to supply the Woodside brothers with workers. Now Woodside homes are under construction again, but this time inside the mill. 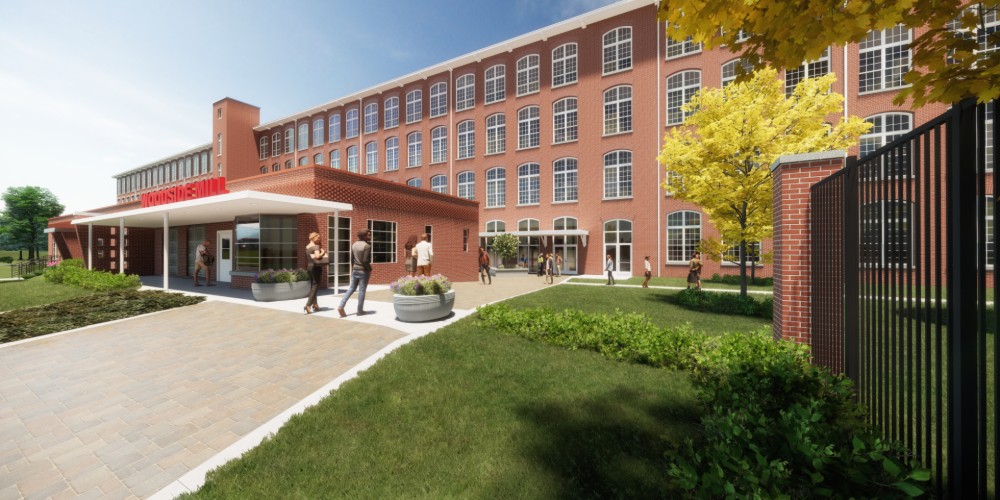 A number of plans for the old mill have been proposed and dropped since it closed in 1984, but by the time Crossgate Partners had an official groundbreaking on Oct. 16, workers were already making progress on the site. Crossgate Managing Partner Randy Moore said he expects to deliver the first of 307 luxury apartments in 16 months, maybe sooner.

He said the stout condition of the cavernous old brick structure is helping the project move along quickly.

“You’re looking at a building that was built over 110 years ago,” Moore said. “It’s fascinating to see that the condition of the building is in such good shape as it is right now. (Founders) John T. Woodside and his brother David set out on a very ambitious goal of being No. 1 in the market and owning the largest mill.”

The interior of the main building includes almost 500,000 square feet of space that will be adapted into the Lofts at Woodside Mill — apartments, common areas, meeting rooms and a yoga studio, offices and a wine tasting room, among other amenities. Other buildings on the grounds will be transformed into commercial space, including a brew pub, Moore said.

According to Jim Woodside, great-nephew of the Woodside brothers, the mill in 1927 was the largest complete mill under one roof anywhere.

“It had weaving rooms and dye houses and things like that,” he said after taking part in the groundbreaking ceremony. “They started opening the bale all the way through weaving, dyeing and finishing. It was a complete textile mill all the way through.” 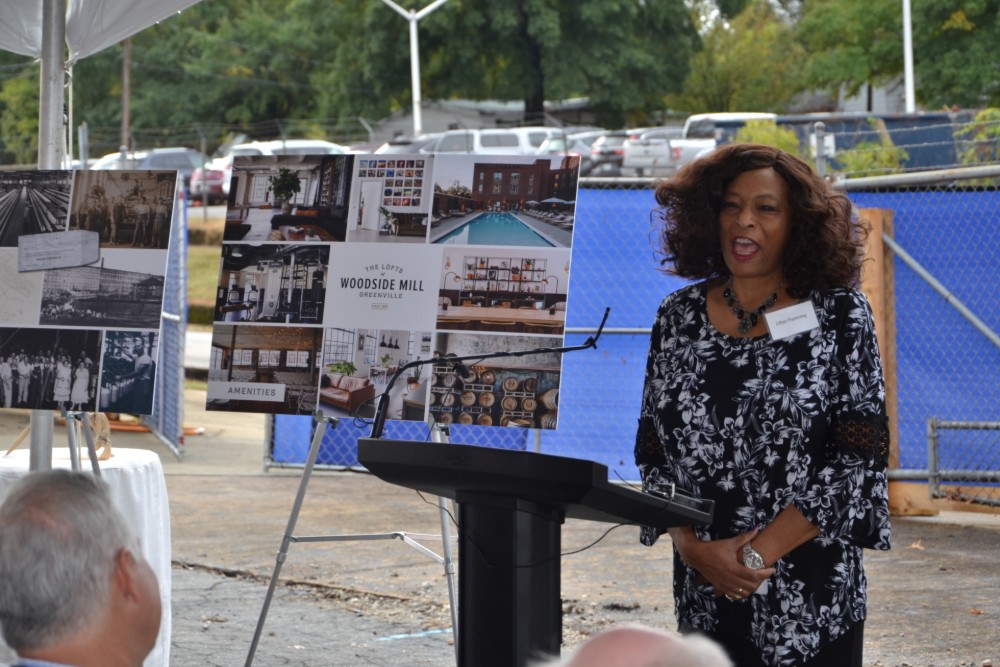 His great-uncles built Woodside Mill and other mills, the Poinsett Hotel and a bank. They invested heavily in developing Myrtle Beach before losing it all in the Great Depression. Jim Woodside said he appreciates not just his family history, but all Greenville history, and is happy to see the largest of the area mills is the latest to be saved from ruin.

“To see this mill revitalized, reused, doing something good for people, it is a wonderful, historic moment,” she said. “It is a great moment. … the community is going to be, oh, Lord, in so much better shape.”

Brock said the Lofts at Woodside Mill will complement investments made across Main Street from the mill where Goodwill has offices, and across Woodside Avenue, where Prisma Health opened the Center for Pediatric and Internal Medicine-West.

“From this to this it’s going to be a wonderful transition,” Brock said, gesturing first toward the mill and then toward artist renderings and plans on display. “It’s going to be not just historic. It will reuse something that has been sitting here for a long, long time, which could be a place of a lot of crime and blight and problems. Now it’s going to be redeveloped, reused and life will come in this particular site once again.”

Councilman George Fletcher said he thought the Crossgate plan is much better than some of those presented in the past.

“Eight years ago a guy wanted to put a movie studio in here. Of course, he wanted the state to pay for it,” Fletcher said. “My gosh, is this a better application than that, or what?”

He said the Woodside Mill was the grandest of the Greenville mills and a society and culture that revolved around them, including baseball leagues and a trolley system.

Moore said he will make sure the revitalization plans preserve the overall structure and some of the details that highlight that history.

“We hope that once the mill is rehabilitated to create some space inside that will allow us to sort of appreciate that history and be able to share it with our residents,” he said.

Laura Woodside, granddaughter of Jim Woodside, was glad to see and hear those plans.

“It’s exciting to see the revitalization of Greenville expand beyond the borders of downtown,” she said. “Textile mills were a vital part of Greenville’s history, and I’m glad to see the building (as with Mills Mill and Monaghan Mill) preserved and given new life.”

Moore said the parts that aren’t old will be very new.

“We have grand plans for this asset,” he said. “For the better part of about two years we have been working with our professionals to design something that is really special. Presently we have three to seven units designed for the interior of this project. They will consist of high- grade custom gourmet kitchens, nice hard surfaces combined with stainless steel.”

Crossgate Partners has teamed up with local architectural firm BetschAssociates, and local construction group Caldwell Constructors to bring the project to life.

“What you see here today is the authentic brick and a lot of the wood material that you see inside the building is important to us,” Moore said. “Part of that is our own motivation and part of that is to restore the historic nature of the asset.”