The shrinking labor pool has frustrated hiring managers across economic sectors, but the hard-hit construction industry is being hammered by a number of factors that keep the worker supply low. An initiative is underway now to bolster the pipeline by reaching out to young people before they settle on another profession. 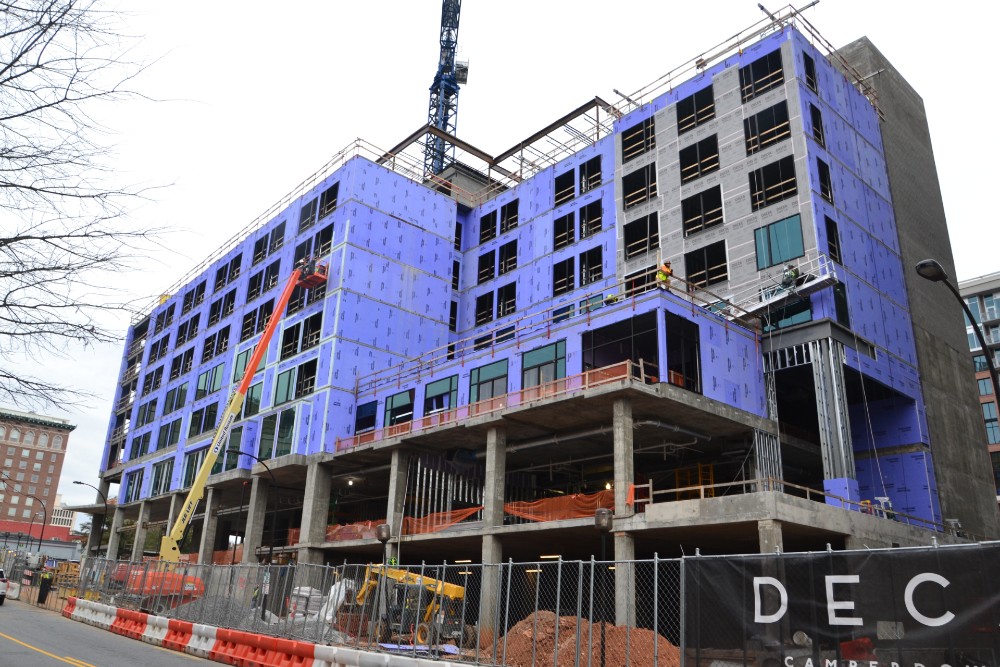 According to the U.S. Bureau of Labor Statistics, 2011 was the low point of the last 10 years in South Carolina when month by month data show that about 77,000 people were working in construction through the year. By 2017 the numbers were closer to 100,000 and the preliminary number available for last November — the latest available — was 103,000, about 3,000 more than the beginning of the year. The need is expected to grow. Nationwide the bureau predicts 500,000 new construction jobs by 2026.

The Associated General Contractors of America found that 81% of construction firms across the country are having difficulty finding skilled workers. Contractors are worried that hiring unqualified workers is a recipe for trouble later. In the AGCA survey, 75% of respondents said their biggest concern is worker quality.

According to the International Risk Management Institute, the shortage of personnel spans the field from field labor to upper management. Lost talent in the management ranks is attributed to those people who left during the recession and didn’t return, and some of those who did return were, by then, a decade older and they’re heading into retirement now.

Writing for the International Risk Management Institute, Rose Hoyle said: “The immediate effects of this shortage are already visible in troubled projects, troubled businesses, and rising insurance claims. We will soon see this affect the upfront cost of construction and schedule, as contractors attempt to hedge the additional risk they are assuming by committing to project delivery in an uncertain labor environment. The longer-term effects could even threaten the viability of our industry for future generations, and by extension, our lifestyle, (e.g., a depressed construction industry means limited new structures in which to live, work and play, and current structures falling into disrepair). It’s no zombie apocalypse, but a slow decline could eventually weaken one of our most iconic American business models.”

Hoyle is a licensed engineer and a risk management strategist.

An initiative to bolster the level of talent in the construction worker pool will have an official kickoff next month when the S.C. Skilled Trade Alliance launches an effort to facilitate collaboration among educators, industry organizations and community advocacy partners. They will use an approach similar to what has been done in manufacturing in recent years, where they’re trying to expose young people to job opportunities while overcoming old notions of what it’s like to make a living in the field. The mission of the S.C. Skilled Trade Alliance is to provide a road map to “intentionally engage, educate, equip and empower individuals to create a workforce pipeline” in the building construction industry.

According to the U.S. Bureau of Labor Statistics, the median age of construction workers has been steadily trending upward, from 36 in 1985, to 37.9 in 2000, to 40.4 in 2010, and last year it was 42.6. That’s older than the average age of the overall workforce and more worrisome because their work is much more physical than a desk job.

Hoyle says a lack of interest from the next generation of workers is a significant problem because they were raised by parents who believed higher education was the only way to a better future.

“Education was prioritized over all else, and many have adopted their parents’ aspirations by seeking the highest education, from the best institutions, so they, ‘don’t have to work construction for a living,’” she wrote.

Jermaine Whirl, vice president of learning and workforce development at Greenville Technical College, will be one of the speakers when the S.C. Skilled Trade Alliance kicks off Feb. 11 at the Center for Manufacturing Innovation.

“This has been on the horizon for a while,” Whirl said. The focus has been on (developing an employee pipeline for) manufacturing, and construction has felt that skilled trades were on the decline, particularly with younger folks in high schools.”

Just as manufacturing proponents have been doing, the construction industry needs to start working on changing minds about the profession, he said.

“Wages are not the challenge. They pay pretty well, especially medium and large companies, and you’re starting to see more of them pay health benefits and they’re introducing retirement packages,” Whirl said. “We need to let them (the younger workers) know that you can go into construction and get promoted and move up. And once you start moving up in a construction company the pay is really good.”

Whirl said contractors are looking for employees with a diverse set of trade skills. It makes work sites operate smoother if the general contractor doesn’t have to hire a series of subcontractors for every kind of task. So workers who can weld and hang drywall and perform other trade skills is desirable to employers.

Whirl said the alliance also wants to grow local talent. Demand for construction personnel in Greenville has caused general contractors to hire workers from hundreds of miles away, he said.

“Skilled tradesmen have been different than people in manufacturing in that they’ve been nomadic,” he said. “They tend to travel to where the work is and then when that job is done, they move somewhere else. A welder may work all around the country.  And so our emphasis is to retain and develop talent here. We’re having a building boom and they (the general contractors) are recruiting folks from Charlotte and Jacksonville.”

The S.C. Skilled Trade Alliance is being undertaken by the Regional Education Center Advisory Board of Greenville under the auspices of the S.C. Department of Commerce. Two sessions of the kickoff are planned on Feb. 11; the first begins at 7:30 a.m. and the second at 5:30 p.m.