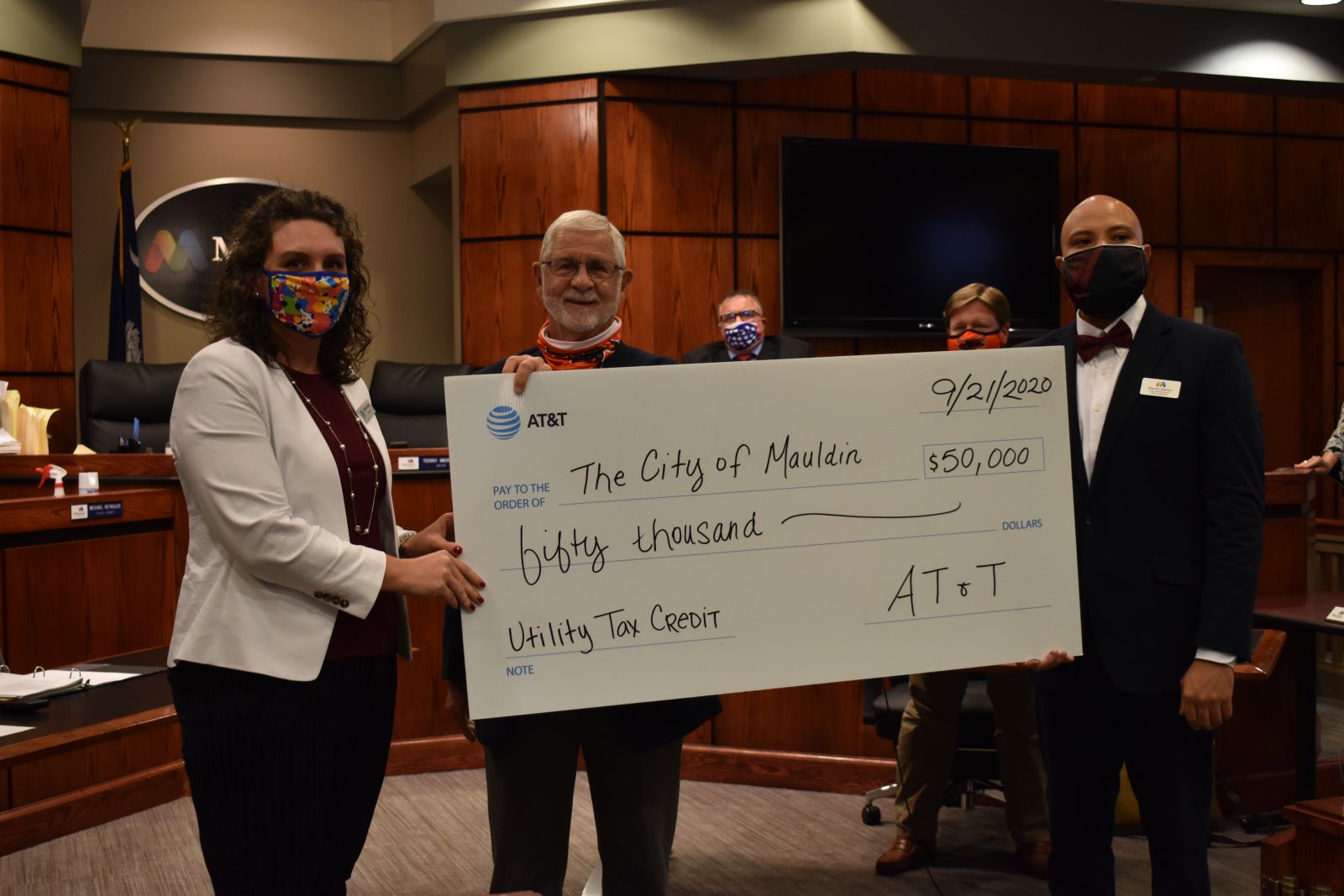 As Greenville prepares to release plans for the extension of the Swamp Rabbit Trail to the Clemson University International Center for Automotive Research at an open house Thursday, Mauldin is taking steps toward installing its own leg of the trail and a pedestrian bridge over Interstate 385.

Under the leadership of Upstate Regional Director Amanda Taylor, AT&T gifted the city $50,000 in utility tax credits, announced on Monday at a City Council meeting, for the creation of a trailhead feature at the foot of the $5 million pedestrian bridge.

“AT&T would like to say thank you for allowing us to partner with the city of Mauldin with your parks project. We were able to contribute $50,000 ETC grant money, and we are very pleased to be in partnership with your trail project,” Taylor said at the meeting.

The trailhead, on East Butler Road, will be installed at the foot of the bridge, linking Mauldin High School to Mauldin Elementary and Middle Schools, as well as the Golden Strip Career Center and an incoming Bridgeway Station multiuse community developed by Phil Hughes.

“Bridgeway Station ... when it’s completely built out, will have hotels, restaurants,” said Van Broad, Mauldin’s community development director. “It could have 10,000-plus jobs associated with that and over a half a billion dollars in investment. That’s a pretty seriously significant economic development project.”

Work on the East Butler Corridor trail extension is expected to begin in 2022-2023, according to Broad with the groundbreaking of the bridge project slated for spring 2021 or sooner.

Mauldin City Council has already agreed to link its portion of the trail to CU-ICAR in coordination with the city of Greenville’s plans.

“The entire trail system may be a couple million dollars, but that does not include the bridge. And that’s a high estimate,” Broad said. 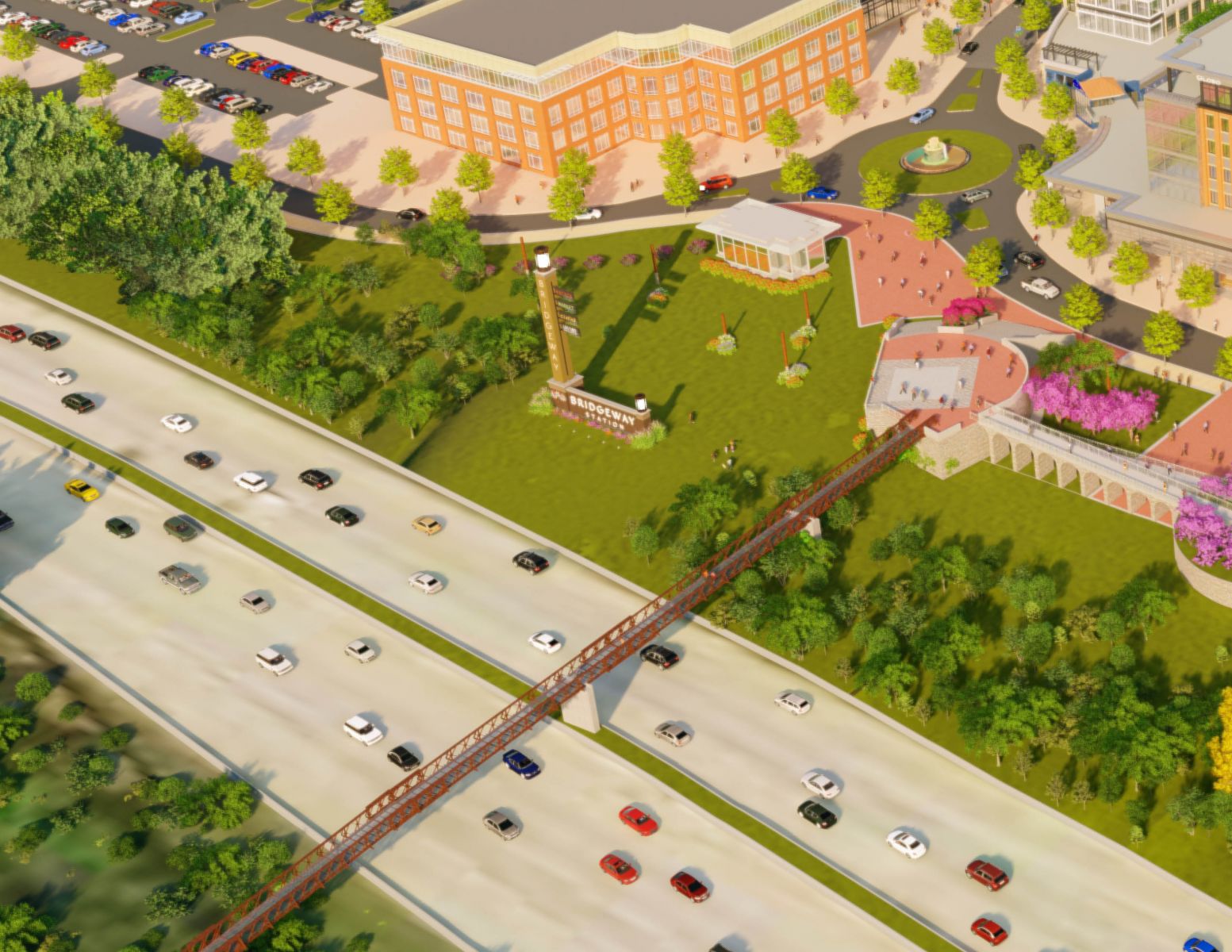 Last year, Laurens Electric Cooperative and its substation agreed to a property easement allowing the city to link the trail to Interstate 385, which Broad calls a “big gift,” with a potential price tag of a couple hundred thousand dollars.

“Mauldin has been leading that effort,” Ty Houck, Greenway, Natural and Historic Resource director of the Greenville County Recreation District, when asked about the extension of the Swamp Rabbit Trail into Mauldin city limits.

The project is one of many trail extensions pursued by Greenville County’s various municipalities, such as an unlinked mile trail in Fountain Inn and the proposed city of Greenville link stretching 4.5 miles along Laurens Road from Cleveland Park to CU-ICAR, approved in 2017. The city of Greenville is set to host a virtual open house spotlighting plans on the extension to CU-ICAR on Thursday from 5:30 to 6:30 p.m.

“We will make our pieces connect when they are close enough to connect,” Houck said. Despite serving on an advisory committee for the city of Greenville project, Houck reiterated that he is not spearheading city efforts — only those outside of Greenville’s municipality jurisdictions.

From the Greenville county perspective, Houck said that all his trail initiatives were “progressing as expected.”

Slater and Marietta have long been eyed as the next beneficiaries of Swamp Rabbit access, but ongoing development is a waiting game.

“We have control of about 60% of the corridor of the old railbed, and we’re talking with property owners about access to the other railbed,” he said, adding that the county would keep its options open and explore other avenues, too.

Like Fountain Inn, the Slater-Marietta community may consider the installation of a one-mile walking route that could one day lead into the Swamp Rabbit Trail proper.

“Until some people literally and figuratively build bridges on roads, there is no connection,” Houck said. “Just like with the trail, we’re building community scale roads that are part of a bigger network to all connect, and that’s why we have the county-wide pre-laid master plan.”

The Swamp Rabbit Trail creates an average $6.7 million annual economic impact in Greenville County and boosts sales at trail-side businesses by 85%, according to a Furman University report.