When Rise Guys P1 Pilsner started hitting Upstate shelves a few weeks ago, it was the latest curve in a tasty and scenic road for Thomas Creek Brewery in Greenville.

Co-founder and brewmaster Tom Davis set out to make great beer 20 years ago. He envisioned a crowded tasting room and his brand of beer on store shelves, but he didn’t know then how often his beer would appear under labels other than his own.

Today Thomas Creek makes its own beer as it always has, but now about 40% of the brewery’s production is beer under contract for others, Davis said.

“It was not part of our business model to start with but when we started out we realized we needed to fill our vats up, and there were offers and a couple of opportunities to do so,” Davis said. He has developed several proprietary beers over the years, going back to the earliest days of the brewery.

“One now is 20 years old and I believe it was our first one, for City Range,” Davis said. “Some of the beers we make for restaurants are specific to that location.” Thomas Creek beer is sold at a variety of Upstate restaurants such as Smoke on the Water and Saskatoon’s.

Davis said the restaurateurs enjoy bragging rights for having their own beer and taking part in the eat/drink local movement among restaurants. 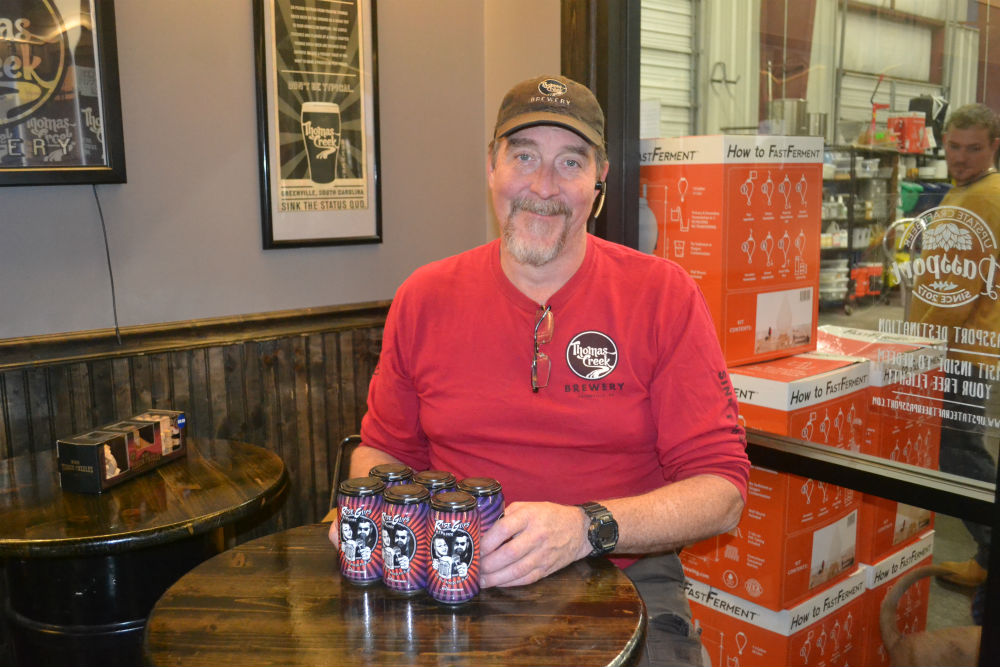 Those beers are labeled under a name the restaurant chooses and some are sold under a Thomas Creek label, such as its popular Trifecta IPA, but even for the private labels, the brewery of origin is not secret, Davis said. Thomas Creek, which celebrated 20 years with a party in March, traces its beginnings to Henni’s Brewpub, where Davis was in charge of making sure the establishment had a great selection of beer.

“Part of what I’ve learned along the way is that we need to produce not necessarily what I want to brew but what they want to drink,” he said.

Davis, a Rise Guys listener himself, sat down with the show’s personalities and producers at the station, owned by Entercom, to create a beer to fit their style. P1 is the name used for their fan base.

Entercom’s senior vice president and market manager, Steve Sinicropi, said Rise Guys P1 Pilsner was as much an outgrowth of another beer project as a marketing device.

“It was an idea we have thought about for some time,” he said. “One of our stations in Seattle licensed a beer a few years ago and it worked well.”

Entercom owns several radio stations in the market, all of which have a lineup of shows and personalities, but the Rise Guys and their audience seemed the most natural fit for a craft beer, he said.

“The Rise Guys have a super loyal audience; they dominate listening with men in the Greenville-Spartanburg market, and the audience has beer drinkers,” Sinicropi said. “One of our account managers came up with the idea for a craft beer passport two years ago and it has grown and sells out quickly. We knew we had the right audience.”

Early sales of Rise Guys P1 Pilsner indicate they were right. According to a news release, the beer launched in September and production was tripled after two weeks when it sold faster than any other new Thomas Creek beer had before.

“The success with the Craft Beer Passport showed us we reached craft beer drinkers, so it was just a matter of connecting the Rise Guys with the right craft beer and let them sell it to the audience,” Sinicropi said. “We have done several activation events for Rise Guys P1 Pilsner and they’ve been great. We’re really excited about it and think it’s going to be popular for a long time.”

Too bad, Entercom doesn’t pay Nine and Mattman any money for appearing on the beer