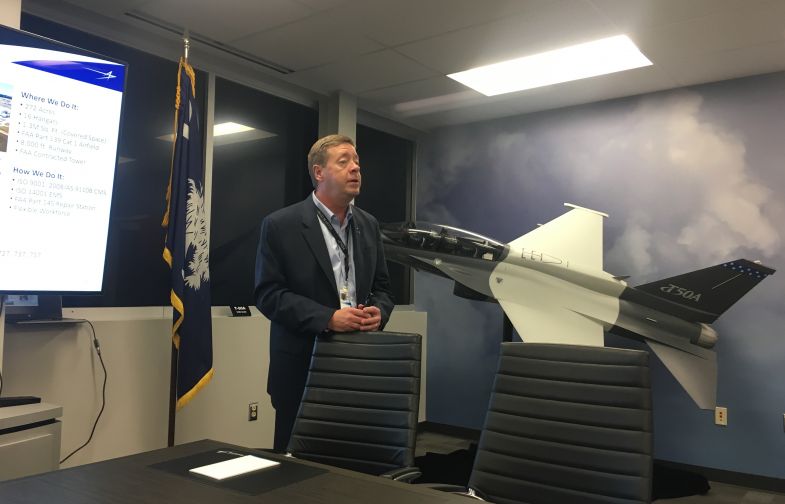 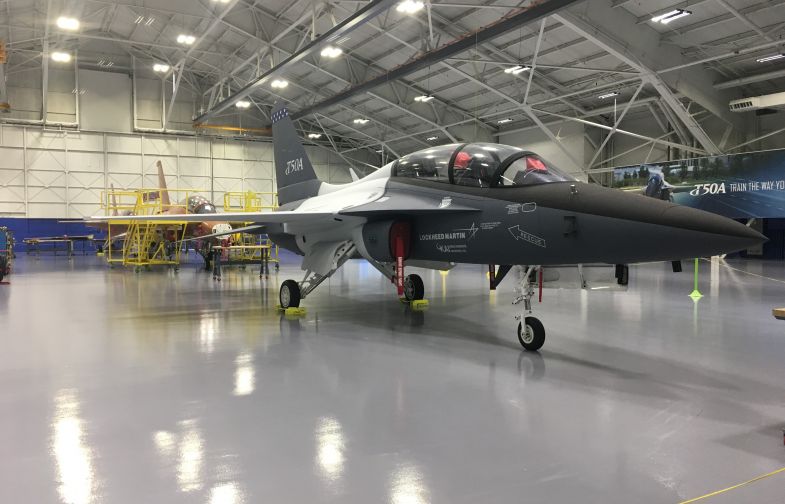 Lockheed Martin's T-50A model sits inside a hangar modified to allow for the aircraft's final assembly and checkout. The FACO will be in Greenville, if the aircraft is chosen by the U.S. Air Force to 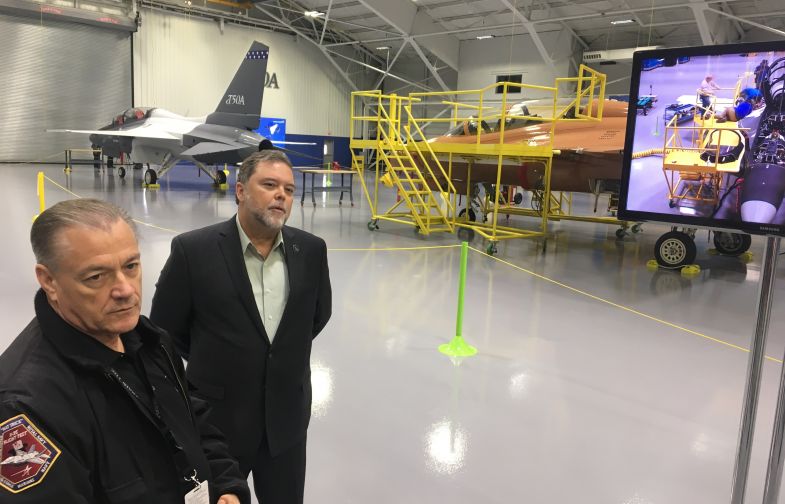 Mike Packer, aeronautics production operations director and Doug Batista, T-50A project manager, talk about the production process Lockheed Martin will use for the T-50A if it is awarded a contract by 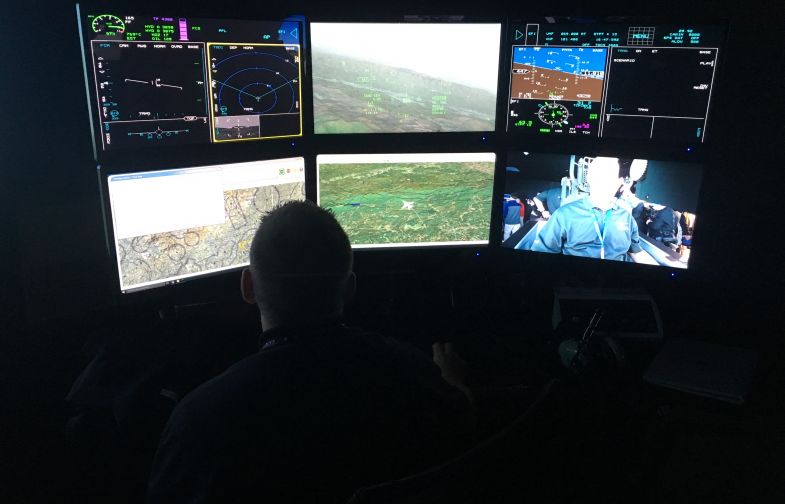 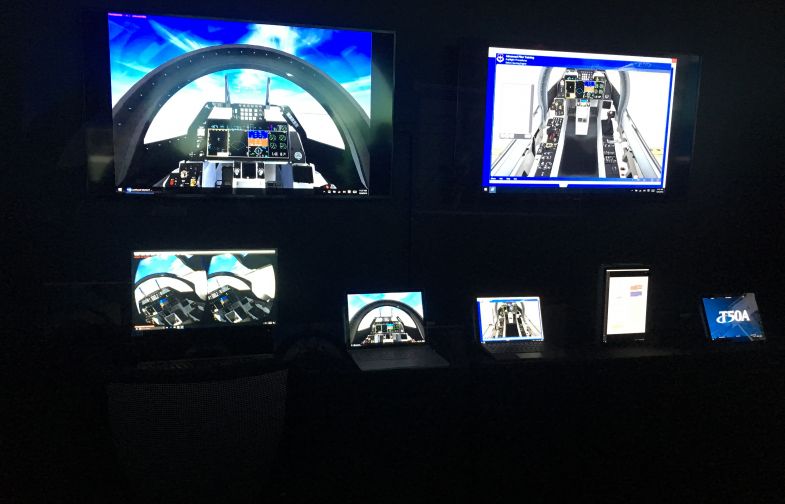 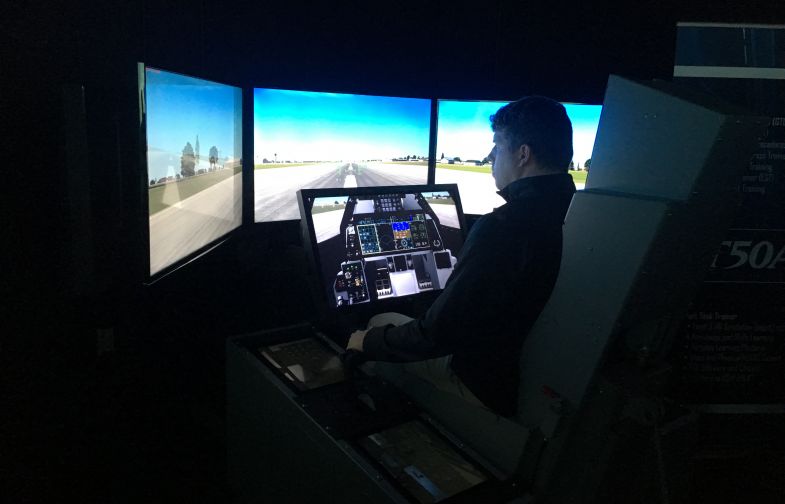 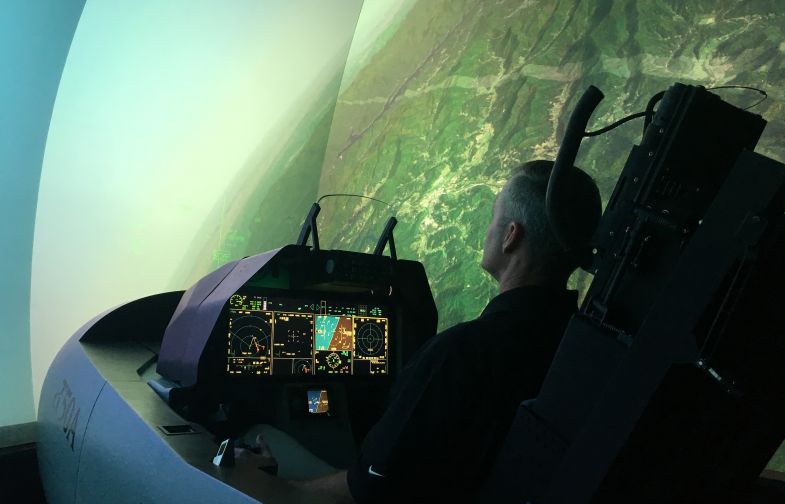 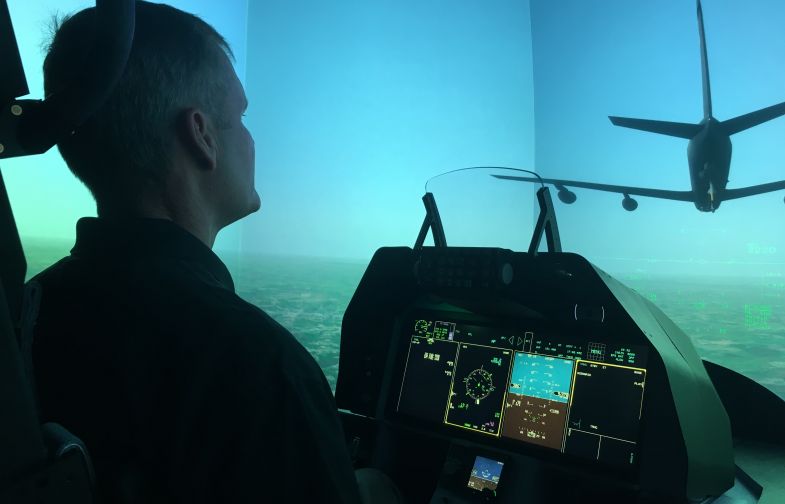 Lockheed Martin officials said they are nearly ready to start final assembly and checkout of its T-50A fighter trainer aircraft.

The T-50A will be the company’s entrant into the U.S. Air Force’s Advanced Pilot Training competition — requests for proposal from the Air Force are expected by the end of the year. Winning the competition could mean 180-200 new jobs at the Greenville operations facility at the S.C. Technology and Aviation Center.

Officials Thursday showed off the newly-completed hangar that will be used for the final assembly and checkout should Lockheed Martin win the nearly $10 billion contract.

Assembly of the fuselage will actually begin in South Korea. The T-50A is a collaboration between Lockheed Martin and Korea Aerospace Industries (KAI) — the same partnership that produced the parent T-50 trainer used by the Korean Air Force to train its fighter pilots. 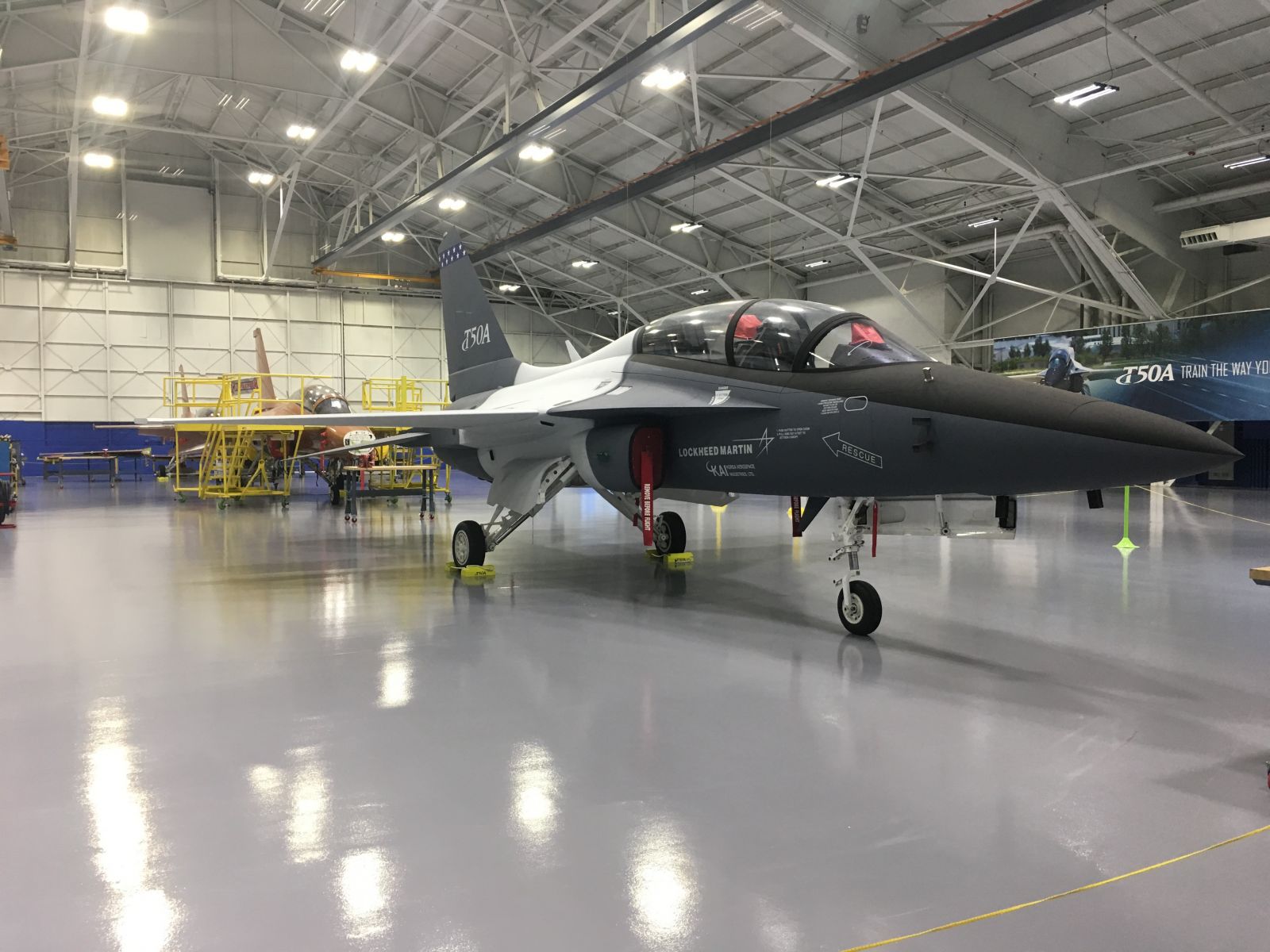 All of the major fuselage components will be assembled in Greenville, once they arrive via shipping container through the Port of Charleston. From Charleston, the containers will move to Greenville via truck. Each aircraft will come in two containers and Lockheed Martin officials said the initial contract of 350 aircraft would mean approximately 48 T-50As per year would roll out of Greenville.

Doug Batista, the T-50A program manager, said the cost to ship from Korea outweighed the costs of setting up a full production facility in the United States.

“There are advantages and disadvantages to having some of this in Korea,” Batista said. “There was never a solution to have all the construction here.

Other potential competitors in the USAF competition include teams of American and foreign companies. Boeing has partnered with Sweden-based Saab while Northrop Grumman is working with United Kingdom-based BAE Systems. Raytheon is expected to submit an aircraft built in partnership with Leonardo — based in Italy — and CAE Global, which is headquartered in Montreal, Quebec, Canada.

Mike Packer, aeronautics production operations director for Lockheed Martin, said the final assembly and checkout of the T-50A is expected to take six months. Overall production of the aircraft will take 24 months from start to final delivery. KAI will have the fuselage for 17 months constructing and preparing for shipping.

Packer said it will take another month for the components to be shipped from South Korea to South Carolina, then six months to complete assembly and delivery of the aircraft.

“We are absolutely confident that it is a six-month turn-around time when it gets here,” Packer said.

While the fuselage is assembled in South Korea, Lockheed Martin officials said between 60% and 75% of the total aircraft will be made in the United States. By law at least 50% of the cost of the aircraft must be attributable to American content.

Mike Griswold, T-50A campaign director, said a wide range of components for the T-50A are American made. As an example, he said the engines for the aircraft will come from General Electric’s Lynn, Mass. facility. 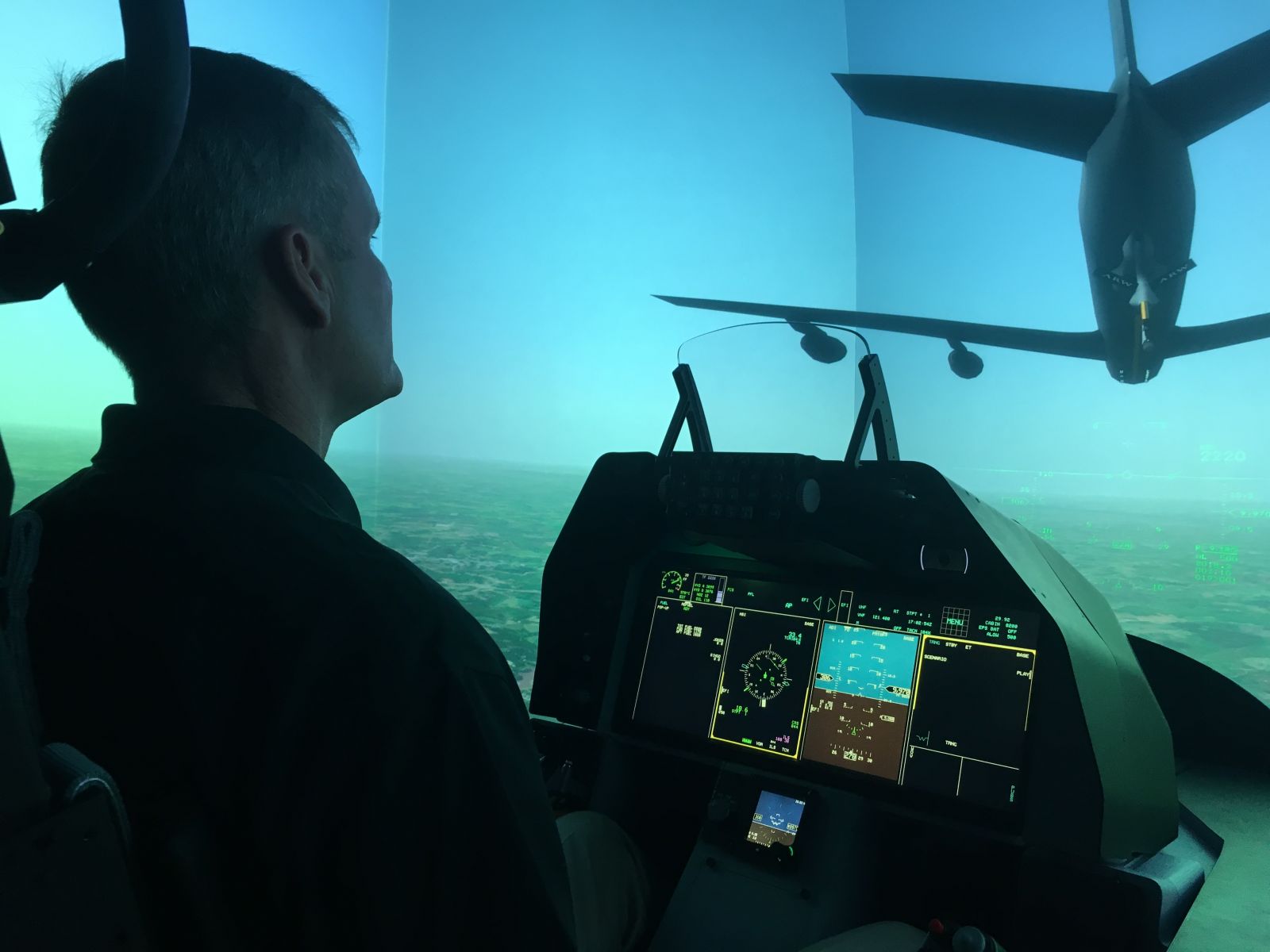 “If you look at the suppliers list for this program it looks very similar to that of the F-16,” Griswold said. “There are the Honeywells and companies like that.”

Job projections, if Lockheed Martin wins the contract, remain at an addition of between 180-200 new jobs at the Greenville facility. Don Erickson, site director of Lockheed Martin’s Greenville operations, said the plan would be to have new employees backfill positions vacated by current employees who move over to T-50A production.

“We have deployed a team and we would ramp that up,” Erickson said. “It would be a plus-200, but they may not be with the T-50A. It will be a good problem to have.”

He said the company has already added some to its nearly 600 employees in Greenville, specifically for the T-50A final assembly and checkout. Those hires have consisted of former U.S. Air Force crew chiefs that previously worked on F-16 fighter ground crews. Erickson said those new hires have mixed in with existing T-50A team members in Greenville.

If the contract is awarded to Lockheed Martin, Erickson said up to 30% would be new hires while the remaining 70% would be specific skilled labor. He said there is little concern of finding that workforce in and around Greenville. 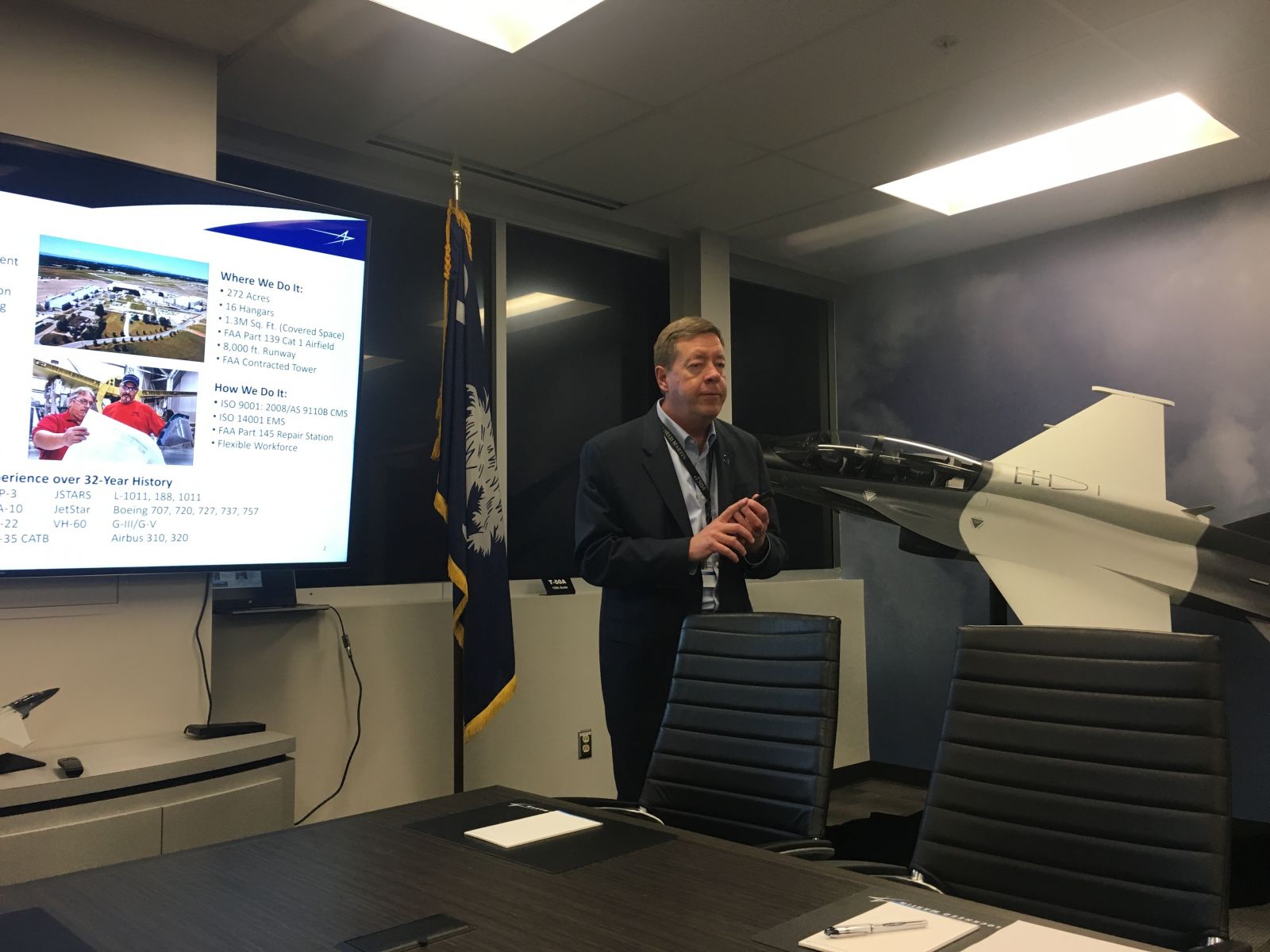 “We’ve ramped up over 100 folks and we have found that once we get them here, they don’t want to leave,” Erickson said. “We haven’t had any trouble filling staff slots here.”

But, all of this hinges on Lockheed Martin winning the competition, which won’t be known until at least the end of 2017. Once the Air Force submits its request for proposal, teams will have 90 days to submit and the Air Force will begin reviewing. The winning contract will be for 350 aircraft over 16 years.

However, even if Lockheed Martin is not successful in winning the contract, Erickson said it would not be the end of the world for the company’s Greenville operations.

“There is still a lot of aircraft we will work on in 2018,” Erickson said. “We have not limited what we can do with our hangar modifications.”

Video of the T-50A in Greenville