Newport News Shipbuilding, a division of Huntington Ingalls Industries, is providing merit-based scholarships for Clemson University student veterans enrolled in degree programs in the College of Engineering, Computing and Applied Sciences with a commitment of $30,000. 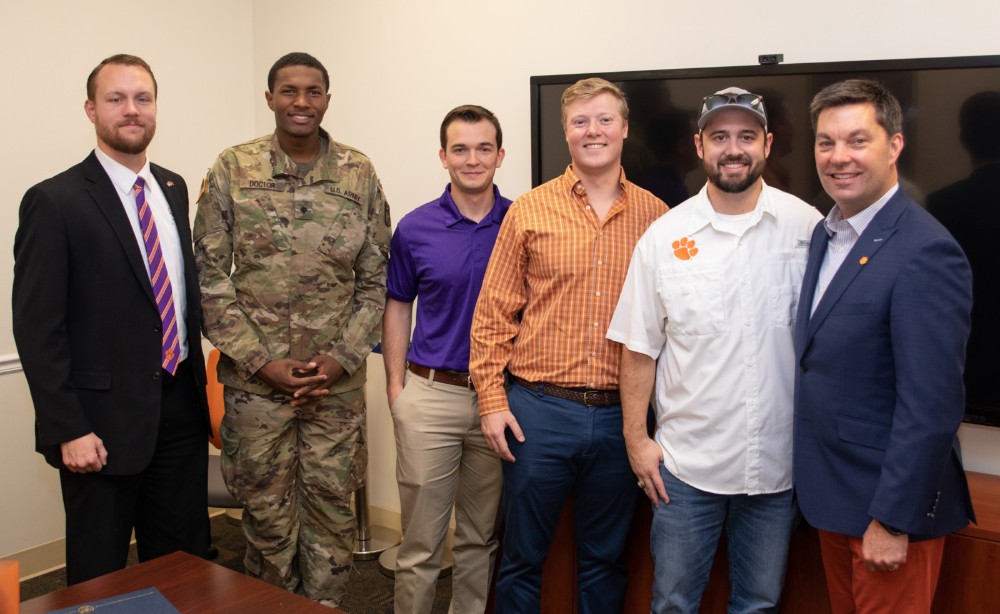 The partnership is part of their workforce development strategy to increase intern opportunities and recently graduated recruits from Clemson, according to a news release.

“I would like to thank Newport News Shipbuilding for generously creating this scholarship opportunity for our student veterans,” Brennan Beck, director of military and veteran engagement at Clemson, said in the news release. “This is going to have a big impact on students in science and engineering fields.”

In his role, Beck assists veterans as they transition out of the military into college and connects them with resources across campus. He also works closely with this year’s Newport News Shipbuilding’s scholarship recipients: Daquan Doctor, who serves in the Army National Guard; Damion Anderson, who served in the Marine Corps; Giff Finley, who served in the Coast Guard; Adnan Hatoum with the Marine Corps Reserves; and Stewart Fuller, who is on active duty with the Navy.

Newport News Shipbuilding is the country’s sole designer, builder and refueler of aircraft carriers and one of two providers of submarines for the U.S. Navy. The company is the largest industrial employer in Virginia, the release said.

Matt Needy, a 1991 Clemson graduate, is vice president of operations for Newport News Shipbuilding. He believes the creation of these scholarships will allow the company to create a pipeline of talent from his alma mater to support the nation’s growing demand for Navy nuclear aircraft carriers and submarines.

“We’re looking for bright, innovated engineers of virtually all disciplines to design and build some of the most complex warships on the planet,” Needy said in the release. “We have a need for young engineers who are strong technically and excel at teamwork and communication. Clemson produces those types of students. NNS currently employs over 3,800 veterans and we are looking for more. When you combine the commitment that you see in a veteran and their natural affinity for the products we build with the pedigree of a Clemson degree in the science and engineering fields, it’s a great match with what we’re looking for in our future shipbuilders.”