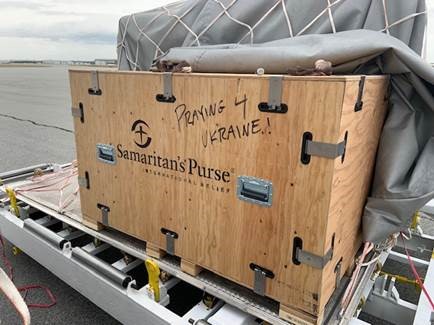 Medical supply and technology company TacMed is accustomed to supplying the U.S. military with tourniquets and body armor, but the manufacturer now has turned its attention to the Ukrainian front.

The Anderson manufacturer has donated more than 53,000 emergency blankets via several non-government organizations and distributed 500 tourniquets and blast bandages through Samaritan’s Purse to Ukrainians in need, according to a news release. The Ukrainian American Foundation will transport 500 more tourniquets and bandages to the Eastern European nation this week.

“We felt it our duty to work with these organizations to deliver our products that will help save lives to those in desperate need in the Ukraine,” Will Wennberg, CEO of TacMed, said in the release. “We continue to support the Ukrainian effort and will look for more opportunities to supply aid in the near future.”

The company’s website warns shoppers that lead times for some products will be delayed and tourniquet color options limited due to the conflict in Eastern Europe.

TacMed Solutions, founded by former Army Special Forces personnel and medics, first located in Anderson in 2006. Since then, the company tripled its size with a $2.5 million investment into a 25,000-square-foot corporate office at 1250 Harris Bridge Road, announced in 2014, according to the Commerce Department.