Canal Insurance makes a move in 'the flight for quality'

At a time when many companies are downsizing their brick-and-mortar presence, Canal Insurance, among others, are making the most of a tenant’s market.

Canal expects to relocate to new headquarters at 101 N. North Main St. in downtown Greenville’s former Bank of America Building in the middle of next year as the company’s workforce expands.

More than 85 employees have been hired on over the past three years, while Canal remains on the hunt for people to fill at least 10 positions including accountants, underwriters and claims adjusters, according to the company president and CEO. 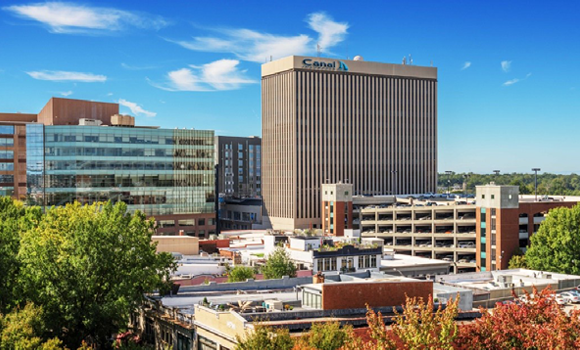 “As a family-owned company, we have considered Greenville home for more than 80 years and share a keen appreciation for the advantages of expanding operations and recruiting employees in such a vibrant city and business environment,” Paul Brocklebank said in a news release. “We view the new office space and location to be a smart fit with the Canal strategy and focus on collaboration and innovation, as we craft new insurance products and services designed for the next generation of motor carrier customers.”

Moving from its Class C brick-and-concrete hub on 400 East Stone Ave., Canal will occupy 65,000 square feet, or one-third, of the soaring One Square skyscraper which soon will bear the company’s name. The building’s former anchor company, Bank of America, moved into 32,000 square feet of office space in the 423 S. Main St. at Camperdown in early 2020.

Brantley Anderson, vice president of the Colliers International office that brokered the Canal deal, said the move is indicative of a larger trend in the Greenville-Spartanburg market: brick-and-mortar companies are flocking to higher quality properties with amenities and the draw of an attractive location, as former tenants downsize, upgrade or go remote.

“We call it the flight to quality,” she said. “We see that right now, and I think that COVID certainly acted as catalyst for that. When companies see that their employees have an option to work at home or come into an office, they want to have that nice, clean, fresh modern feeling hub to incentivize their employees to come back to the office.”

For the first time since the first quarter of 2020, absorption rates are out of the red for Greenville-Spartanburg office space at 50,697 square feet for Q3, according to the company’s market report. Overall market vacancy rates have dropped to 17.4%, down from 17.80% in the last quarter.

“Having a new anchor office tenant downtown is something the city has been pushing for, and we are excited that Canal can continue to elevate the office market in the Central Business District,” Taylor Allen, vice president at Colliers, said in a news release.

At an average $24.12 per square foot, Greenville’s Central business district properties did see higher vacancies than the market as a whole, but the area’s highest class properties had the lowest vacancy rates in the entire county, 12.52%, according to the report.

“Companies might want to shrink their footprint but make it a very high-quality space,” Anderson told GSA Business Report.

Spartanburg County’s Class A office space market — with 7,061,000 less square feet of inventory than Greenville — has a vacancy rate of 3.06%.

A few of these prime spots that were scouted out by new tenants or buyers include a total 49,000 square feet near Fluor Field, at Clemson University International Center for Automotive Research and in Spartanburg’s landmark Montgomery Building.

For Canal, the new location will be a tool for future recruitment and retention, according to Laura Beth Medley, Canal’s vice president and chief human resources officer.

“Companies are focused not only on attraction, but also retention given what companies are offering their employees right now,” Anderson said.