“What are you hauling?” Truck drivers get that question all the time.

The answer, this time, was amusing to the driver and the asker. The driver was the great-grandson of the man who started Eli Bridge Ferris Wheels in 1900. Still in the family business, he was using company equipment to haul a gear box for a giant wind turbine. The man asking the question was Jerry Barber, amusement ride designer, inventor, manufacturer and entrepreneur. 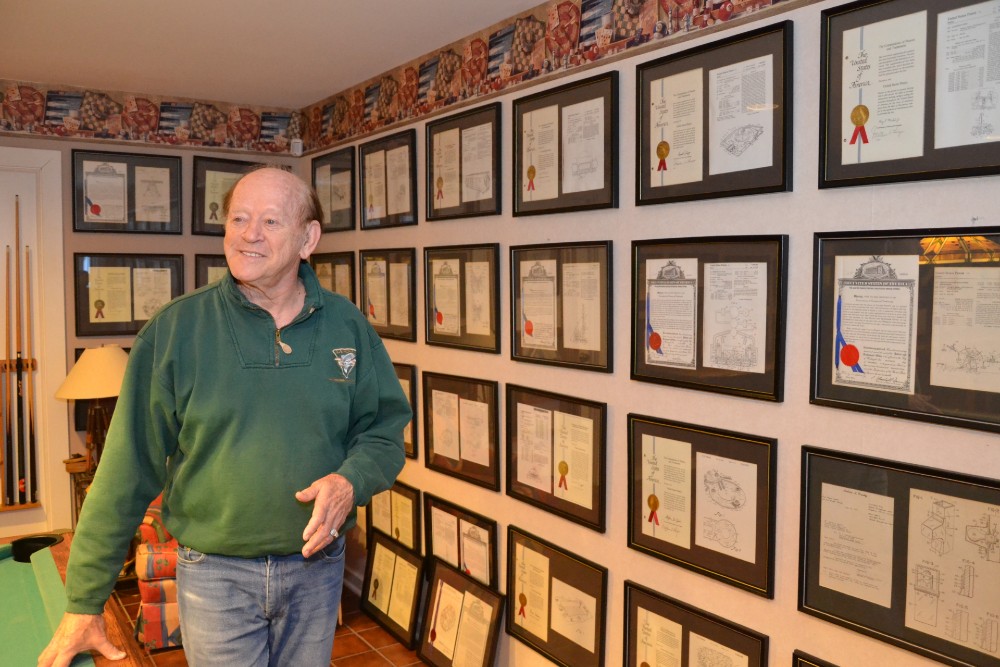 “We both started laughing,” said Barber, who lives in Greenville. “Every carny knows you don’t put a gear box in the middle of an amusement ride.”

To the man who for 18 years was the country’s second largest manufacturer of amusement rides, it seemed absurd that the most advanced turbines in the wind energy industry have gear boxes.

“And I got to thinking about it and thought that’s crazy because, of the 30 different rides we built, except for kiddie rides, we never put the gear box in the middle because they’re heavy, expensive and they break down,” Barber said.

When Barber gets to thinking, he doesn’t just consider the problem; he also starts looking for solutions. And as two walls lined with framed patents attest, he often finds those solutions. This time he thinks he has discovered a better way to harness energy from wind by creating a turbine that is dramatically more efficient to build, maintain and operate.

His first innovation was to get rid of the gear box. In a traditional turbine, the energy is gathered at the center of what looks like a giant fan. A spindle comes out of that center and into a gear box. Barber put a ring around the outside of his blades, creating what looks like a giant bicycle wheel. That outside rim, as it spins, rolls over wheels that directly turn the generator to create electricity without a gear box.

Barber built a prototype in Oklahoma several years ago and his project started attracting attention from around the world, including from Denmark, a country with a long history of wind technology and expertise. Wind power expert Jan Ibsoe came to the United States to meet Barber and they visited the Oklahoma turbine.

“First thing he said is we need more twist in the blades,” said Tammy Barber, COO of what is now Barber Wind Turbines, based in Greenville.

So the Barbers hired another Dane, Christian Meldgaard of Composite Lab, to design better blades for what was then a five-blade turbine. The design at that point was a 230-foot-tall turbine that looked like a giant bicycle wheel with 64 spokes supporting an outer rim with five large fan blades inside. The blades were 6 feet wide at the axle and 3 feet wide at the rim.

“I was talking to him (Meldgaard) on the phone and I told him that last year I came up with this crazy idea of, instead of having five blades, just put small blades on all the spokes,” said Jerry Barber, who already had a patent pending for the idea. “But it was so way out there I was just afraid to mention it to anybody,” he said.

Meldgaard was interested, though, so much so that he couldn’t stop thinking about it. About a week later, he called again.

“He said, ‘I did what you hired me to do; I put more twist in your blades but if you want my recommendation you need to do away with the five blades and go with these airfoils,’” Tammy Barber said. She said Meldgaard explained that his analysis showed the airfoils on the spokes would be more efficient at capturing wind and cost less to manufacture than the large blades. “He said it’s completely revolutionary.”

The design at this stage replaces the five big blades with airfoils running the length of the spokes. The foils pitch and twist to adjust to the strength and direction of the wind. Construction of the second prototype is scheduled to begin by the end of the year, and the Barbers say they think it will be generating and providing power in Concordia, Kan., around April of next year.

They’re not the only ones who believe it will work.

Barber Wind Turbines announced this month that the company was awarded a statement of feasibility from DNV GL, a global quality assurance and risk management company that includes testing and certification of renewable energy ideas among its services.

“It took seven months and a weeklong meeting in London, but it was worth it,” Jerry Barber said. “If they say it’s certified, then it’s going to do what the engineering says it’s going to do.”

Tammy Barber said the certification will make moving the technology to market much more manageable.

“We knew it was new technology, and we wanted to mitigate some of the concern for installing new technology,” she said. There are three markets in the industry. Small wind is for providing or supplementing energy at a single site, such as a home. Big wind is what people think of when they see giant turbines at wind farms. Those turbines are typically 1.5 megawatts or larger and create large amounts of electricity that can be moved over the largest transmission lines.

Barber Wind Turbines is looking at the market in between.

“The one in the middle is called distributed generation,” she said. “We chose to launch in that market because there’s hardly any competition in it.” There are also fewer regulations to tackle.

Distributed energy from a Barber Wind turbine, at 800 kilowatts (or 0.8 MW), can provide enough power for about 300 homes in the United States. For markets like the Caribbean, where homes use less power, that number doubles, Barber said.

Island communities around the world typically use diesel to power generators at a cost that ranges from 25 cents to 45 cents per kilowatt hour. He said the Barber turbine can produce it for as little as 2.3 cents per kWh. The levelized cost of energy produced by a Barber turbine over 25 years is expected to be half of the cost of energy produced by the giant turbines, the Barbers said. That includes the cost of transportation, setup and maintenance, and those aspects of the Barber turbines are also influenced by his experience manufacturing equipment for traveling carnivals.

Everything needed to create a Barber turbine will fit in 40-foot shipping containers, and it doesn’t take highly specialized training or a crawler crane to set up or maintain the turbine. In fact, part of the design allows the turbine to be assembled on the ground and then erect itself and — if necessary for maintenance or a hurricane — it can lie back on the ground. That’s why the Barber turbines are feasible for islands, he said.

“You don’t realize how many islands there are around the world and most of them have people living on them and they’re on diesel. They also don’t have cranes,” Barber said. But many of them import a lot of goods so they have the equipment and infrastructure to move shipping containers. “Anywhere a 40-foot container can be taken, our turbine can be installed,” he said.

By eliminating the gear box and making the turbines more mobile, the Barber Winds design has tackled the most expensive elements of installing, operating and maintaining large transmission turbines, the inventor said.

“The big turbines require highly trained technicians working from cranes; basically a bunch of carnies can maintain our wind turbines,” Jerry Barber said. “It’s an amusement ride without seats. All I’ve done is moved technology out of the amusement ride industry and into the wind energy industry.”