The twists and turns of steering Volvo toward S.C. 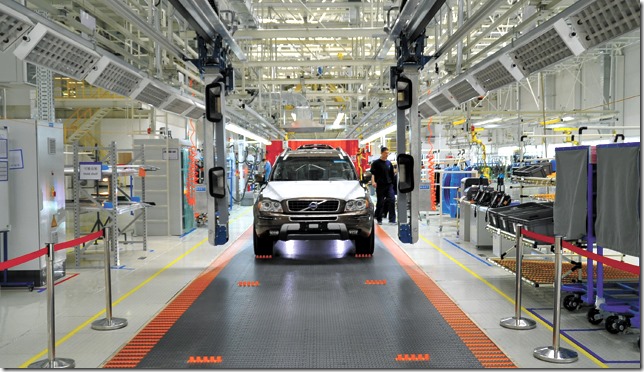 Volvo plans to invest $500 million in building its car plant at the Camp Hall Tract in Berkeley County. The company expects to produce 100,000 cars a year once it begins production in 2018. (Photo/Volvo)

The race was on.

State Commerce Secretary Bobby Hitt received a tip in July that South Carolina was among a handful of Southeastern states in the running for Volvo’s first North American manufacturing facility.

When a phone call a month later confirmed Volvo’s interest in the state, Gov. Nikki Haley had one response.

Haley sat down several weeks after the deal was announced to talk about the hunt for the high-end automotive manufacturer.

“It was a roller coaster ride after that,” Haley said of the phone call.

Numerous state agencies worked together to make the deal happen. Over the next 10 months, meetings took place in downtown Charleston restaurants, at Volvo’s legal offices in New York City, at the company’s headquarters in Gothenburg, Sweden, and during site visits all over the state.

Volvo officials had a big decision to make: Pick a site that could buoy U.S. sales, generate product excitement and expand its global market share.

The site needed to be near major highways, an international airport and a port with a track record of shipping cars. The company wanted to plant roots in a state that promoted business and offered a skilled, trainable workforce.

Hitt said his team tried to glean as much information as possible about Volvo’s needs in those initial meetings. Commerce had three sites across the state chosen as options. Hitt declined to mention specific sites but said “they were in three distinct regions of the state.”

A lot was at stake for the Sweden-based, Chinese-owned automaker as it made its foray into becoming a “Made in America” manufacturer.

Meetings between company and state officials were ongoing throughout the fall and into early this year. Volvo officials wanted to investigate every claim made about successful manufacturing facilities, training programs and logistics operations in the state.

They visited readySC’s Boeing training center at Trident Technical College in North Charleston and then saw Boeing employees building planes at the Dreamliner plant. They visited BMW Manufacturing Co. and the S.C. Inland Port in Greer and stopped by the Clemson University International Center for Automotive Research in Greenville.

Volvo met three times with the S.C. State Ports Authority to see how the Port of Charleston handles cargo. At the Columbus Street Terminal, Volvo officials watched as port workers drove BMWs off trains and onto containerships. They envisioned the possibility of those being Volvo vehicles one day.

Dorchester County offered an attractive site off Interstate 26 for the Volvo plant, but environmental studies revealed the land held too many wetlands. Building there could limit the size of Volvo’s footprint and harm the site’s ecosystems.

So six months into negotiations, the state had to present an entirely new site to Volvo.

“That was a little bit of a scary time from my side,” Hitt said. “Generally speaking, when you’re several months in, changing sites can be a sign of weakness that we didn’t have it put together just right. We were semi-starting over, but we put together a plan.”

Behind the Volvo deal from Charleston Business Journal on Vimeo.

Haley said the site switch was nerve-wracking for everyone involved on both sides of the Atlantic. Commerce officials scrambled to keep the company interested.

Berkeley County Supervisor Bill Peagler received a call on Feb. 5 about Volvo. Peagler remembers saying to Barry Jurs, the county’s economic development director: “Do whatever you have to do to make this happen.”

Officials from Berkeley County, Santee Cooper and Commerce met secretly in Columbia. By the end of the meeting, plans were in motion to prep a new site across Interstate 26 in Berkeley County. The 6,800-acre, undeveloped Camp Hall Tract would be the state’s new pitch to Volvo.

Santee Cooper had been working with the state on the Dorchester County site, so it was familiar with the project when the deal transitioned across county lines, said Sam Bennett, the utility’s economic development manager.

During one visit to the Lowcountry in February, Volvo officials took helicopter rides from Charleston International Airport to get a bird’s-eye view of the region and survey the new site.

“We were trying to build up the same level of trust that Dorchester County had done such a good job of doing,” Bennett said. “It was very tense for us and maybe for them. The sites had just been swapped. ... We did not know how they felt because we don’t speak Swedish, and they had full conversations in front of us.”

South Carolina was still in the running, along with the known competitors of Kentucky, North Carolina and Georgia. Volvo took interest in the Berkeley County site. South Carolina had its confidence back. Haley thought they were in the homestretch.

Then S.C. officials heard that Georgia recruiters were headed to Volvo’s headquarters. Hitt asked Haley to join him on a last-minute recruitment trip to Sweden in early March to show they were serious.

At a table in a boardroom, Volvo attorneys sat on one side and S.C. officials sat on the other. Conversations were flowing. Then they hit a wall. Negotiations stalled.

Haley said she could feel Volvo’s apprehension about the project details, numerous regulations and environmental concerns. Choosing the wrong site could jeopardize the company’s plans to increase U.S. sales. For South Carolina, half a billion dollars in investment and at least 4,000 jobs were on the line.

Haley said she remembers telling company officials the state would deliver for them: “In order for us to do this, we have to trust each other and I’ve got your back. And if you will let us do what we do best, which is build things, we will make sure that Volvo is a showcase item around the country.”

After the Sweden trip, plans were taking shape for the new site. Berkeley County filed a permit in mid-April with the U.S. Army Corps of Engineers, Charleston District, on behalf of the company under the code name “Project Soter.”

The Charleston Regional Development Alliance compiled marketing materials to present to Volvo that would differentiate the Lowcountry from other sites, CEO David Ginn said.

Officials from Commerce, Santee Cooper and Berkeley County joined Hitt and Haley on a trip to New York City to make a final pitch to the Volvo North America executive and legal team.

“This was the one project to date that we truly did not know where we stood,” Haley said. “I mean, there was no gut feeling. No anything. ... They were amazing at keeping their emotions to the chest.”

The team left New York unsure of whether they had won the deal for South Carolina.

Volvo had made a decision, and it looked like it was South Carolina.

Lex Kerssemakers, president and CEO of Volvo Cars of North America, canceled a phone call with Haley on May 8 and said company officials were instead coming to South Carolina in person.

Then while Haley was giving the commencement speech at the University of South Carolina, Volvo canceled the trip and rescheduled the call. She worried her state had lost the deal to Georgia.

Staff members from the governor’s office and the Commerce Department gathered in the library of the Governor’s Mansion at 6 p.m. that evening for the call. Haley wanted to be in her favorite room in the house. A portrait of Gov. Carroll Campbell, who landed the BMW deal 23 years ago, hangs in the room.

Haley put the phone on speaker and set it on the table. The group waited impatiently while Kerssemakers talked about the negotiations.

“Then he said ‘We want to come to South Carolina,’ and there was just a roar in the room. Everybody was so excited and so happy,” Haley said.

Gov. Nikki Haley and her staff get the news that Volvo has picked South Carolina in the Governor's Mansion library, where a portrait of Gov. Carroll Campbell hangs. Campbell was highly instrumental in luring BMW to the Upstate decades ago. (Photo/Zach Pippin, director of digital media for Haley)

The news was not yet public. Two days later, on Mother’s Day, the Santee Cooper board of directors called a special meeting to vote on an agreement that would provide $54 million in incentives to Volvo. The state-owned utility would buy the 6,800-acre Camp Hall Tract and develop it for Volvo and future industry.

That Monday, May 11, the company confirmed its decision in a news release at 6 a.m. Eastern time. By 10:30 a.m., Haley, Hitt and nearly 30 economic developers and business leaders involved in the deal gathered in front of the Governor’s Mansion in Columbia to make the official announcement and to field questions from reporters.

“In less than 100 days, we were able to accomplish what normally takes a year or more to accomplish,” Berkeley County’s Peagler said, referring to the last-minute switch to his county’s site.

South Carolina is one of the only states winning automotive manufacturing plants. Ten new vehicle assembly plants have been announced in North America since 2009; of those, eight have been in Mexico and two have been in the Charleston region, according to the CRDA.

Haley said it matters how state agencies are run — companies want to move quickly through permitting process. It also matters whether agencies are willing to collaborate with state and company officials, as well as with one another, in the way environmental groups and economic developers did on the Volvo deal.

Manufacturers want large sites to be near infrastructure, she said. They want to know they can find qualified workers, and they want to talk with companies that have set up shop in the state.

“They want a state that understands business, and whether it’s a union trying to take over, whether it’s (Washington) D.C. trying to infringe, or whether it’s something they don’t foresee — they want to know that we’re going to have their back,” Haley said.

Officials said the Volvo plant will improve the quality of life for residents and reshape the region by bringing growth and job opportunities, especially for people living in poor or rural counties near the site.

“That’s the big key component for me right now is making sure that South Carolinians get these jobs, because that’s what we worked so hard to do,” she said.