Ashley Clark hadn’t planned to open a franchise. The 28-year-old thought she wanted to be a lawyer. But the 2018 South Carolina Young Entrepreneur of the Year and co-owner of Kilwins Chocolates, Fudge and Ice Cream in Greenville appears to have found her calling.

The 2012 graduate of Clemson University majored in English. “I thought I wanted to go to law school, so that’s why I was an English undergrad,” she said. She sat for the LSAT, the admissions exam for law school, and was working in a law firm in her native Forest City, N.C., when a conversation with her dad led her in a different direction.

“I was kind of complaining to him that I didn’t have what I thought was a real job,” she said. “He suggested I look into franchising a Kilwins. He was familiar with Kilwins from the one in Blowing Rock, N.C.” 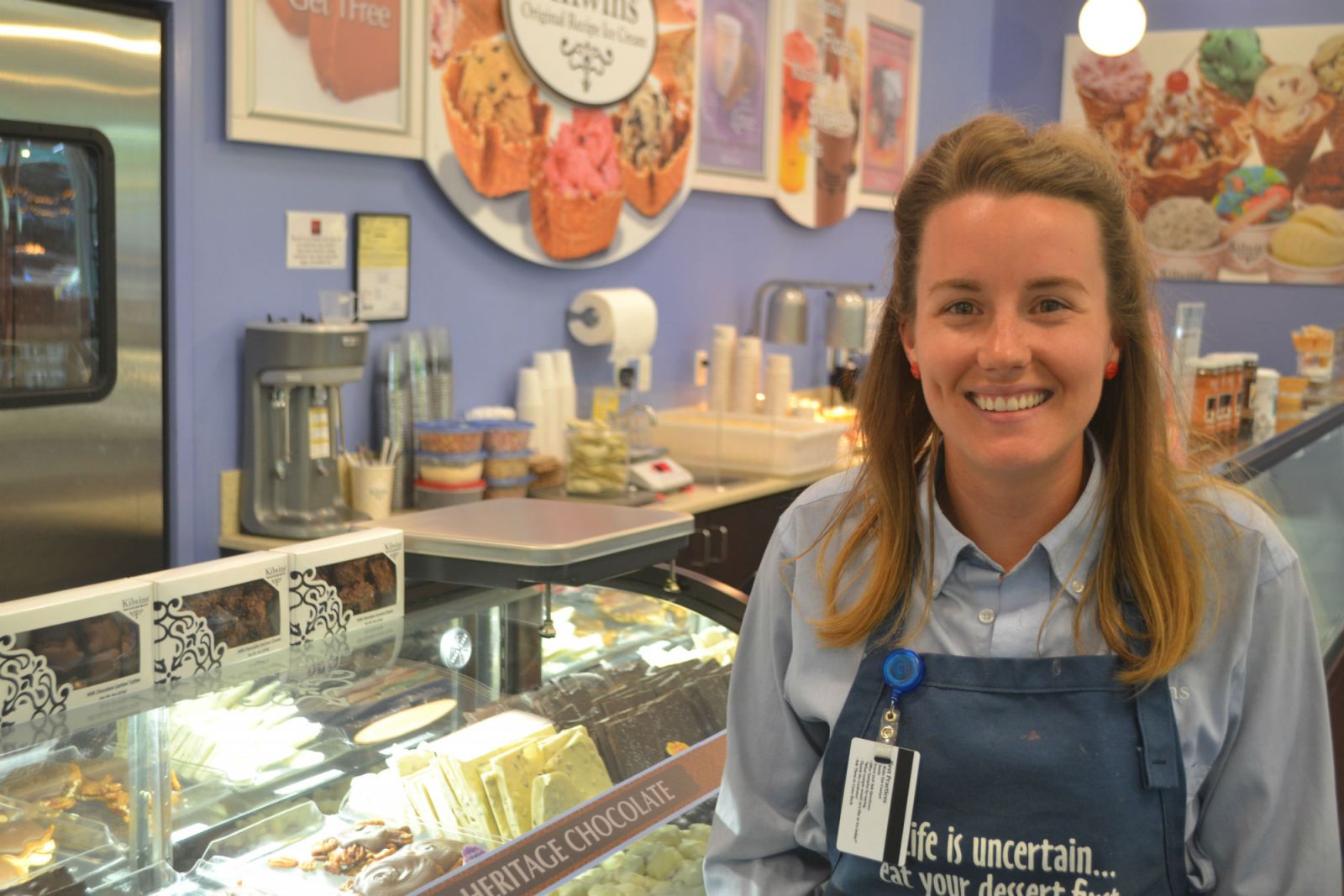 Clark said her dad has an entrepreneurial spirit, one that led him to start the Orange & White, the Clemson sports newspaper, which he later sold. He has owned a State Farm insurance agency for 30 years, she said.

“I guess he just saw something in me that I could do this,” she said.

Clark wasn’t very familiar with Greenville, but her father was and suggested the city as a Kilwins franchise location for his daughter.

“Dad knew Kilwins and knew it was a great product, and that there wasn’t a Kilwins in Greenville. What we didn’t know at the time is that Kilwins was looking for a franchisee here,” she said.

Clark co-owns Kilwins Greenville with her husband, Landon. They have eight team members and Clark said five more will start for the summer season. September of this year will mark five years since Clark opened the franchise. The once would-be lawyer said she has learned a lot since opening.

It’s the management of people that Clark said has been the most rewarding, the most challenging and the most surprising.

“I really didn’t think at all of what it was going to mean to be a leader, so when we first opened we just hired anybody and we had a lot of turnover,” she said. “Now we do things a lot differently and it makes a huge difference.”

Clark and her husband went through training at Kilwins corporate headquarters in Michigan, but the training wasn’t on how to manage people. With a franchise, Clark’s employees work for her LLC, Rocky Road Enterprises. Clark’s training, however, did include baking. Seventy percent of the product in her store is made in-house.

Some of the most popular items at Clark’s Kilwins include almond toffee crunch, fudge and ice cream. She said a new item is also very popular — dark chocolate sea salt bark, which Clark said is her favorite item. The products made in-house, though, are easy to resist, because as Clark said, “If you eat it you have to make it again.”

Scott Whelchel, area manager and consultant for the Greenville Small Business Development Center, nominated Clark for the award. He said he has been impressed with her commitment to her business and the community.

“She is a learner, dedicated to growing as a business owner, investing in and serving people,” Whelchel said. “She and Landon had taken personal risks in changing up the hiring process and rethinking employee relationships at Kilwins. They were open, they listened, and they found a better way to engage and retain the employees they need.”

As for what’s next, Clark said she wants to branch out into more business opportunities.

“We have one more year of paying on our loan here,” she said. “Once this store is debt free then we will be more open to looking at other opportunities.”

In addition to operating Kilwins in Greenville, Clark also volunteers as a coach for the Minority Business Accelerator, a program of the Greenville Chamber's Diversity and Inclusion initiative, and is member of the Fall for Greenville Board of Trustees. She serves as an associate commissioner with Greenville County Soil and Water Conservation District and is a member of the Nathanael Greene DAR Chapter.

Editor's Note: This story originally appeared in the May 7, 2018, issue of GSA Business Report.