“It’s had a few hiccups, but it’s done far more good than most any program that has come out of Washington in a long time,” Graham said about federal small business loan assistance. “The opportunity zones that many of you are familiar with that were in the tax cut bill — that was Tim’s idea. So, when we put these two things together, these are proposals that really matter," Graham said, adding that the program will have rescued millions of people from bankruptcy once all is said and done. 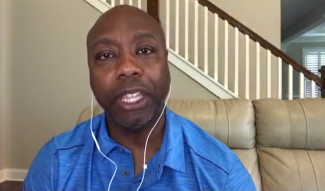 Graham and Scott said that as a second round of federal assistance is allocated to business owners through the Paycheck Protection Program and other funding streams, they will be working to carve out a share of federal funding resources for small and microbusinesses as the U.S. Senate reconvenes in Washington, D.C., next week.

Scott wants to see more resources funneled into the Paycheck Protection Program and a more thorough vetting of applicants.

According to Scott, the first Coronavirus Aid, Relief and Economic Security Act opened up loopholes for much larger entities to obtain funding, including Ruth’s Chris Steak House, the Los Angeles Lakers, Potbelly Sandwich Shop and Steak ‘n Shake, among others.

“Thank God most of these folks are returning their resources,” Scott said. “Truth is we are going to have more targeting and, probably, I would expect more compliance as it relates to making sure that the commitment you made in order to be eligible for the money: there’s going to be some vetting of that process to make sure that you actually needed the resources as we look forward.”

Graham also said he sees Great Depression-like unemployment numbers and high compensation as another barrier to effectiveness of the Paycheck Protection Program and restarting the economy.

With national unemployment reaching 15%-20%, Graham said he and Scott had an initial goal for making workers whole up to $50,000 by using federal funding to patch the difference between the $326 in weekly state employment benefits and the $600 lost at a $15 per hour wage.

Computers in other states were not able to process these differences, however, so Graham said everyone received $600 on top of the $326 state benefit. While $51,000 is the average household income in the state, families who have filed for unemployment can make a rate estimated at $90,000 in unemployment income.

“They aren’t lazy, but people are going to do what’s best for them,” Graham said, adding that the $16 or $17 per hour wages offered by restaurant or hotel owners as the economy reopens paled in comparison to more than $20 per hour brought by filing unemployment.

All leaders at the event, moderated by Womble Bond Dickinson partner Stephanie Few, said that the state’s approach to balancing economic and public health interests since the COVID-19 pandemic reached the state helped prevent COVID-19-related deaths predicted as high as 1 million to 2 million people.

Scott reiterated that the state has fewer deaths and cases than many of its Southeastern neighbors and thanked McMaster and his team for their methodical approach.

“I think his slow progression toward trying to find a way to reopen South Carolina’s economy is consistent with the president’s three-phase plan,” Scott said. “Which basically, simply says when you’re seeing from a percentage basis a dropping in your cases and you have a hospital capacity that, today, is better than it was before COVID-19 started, and you’re able to identify the hotspots, so that you are able to isolate them to mitigate the spread of the virus, you’re in a position where you can take a look at starting the process to reopen. Henry is in that position.”

McMaster argued that his social distancing strategy was mindful of constitutional freedoms but also squelched the spread of the virus at businesses that garnered the largest crowds or human contact.

“We started with restaurants,” McMaster said, when discussing his tiered shutdown of businesses across the state. “And we are looking forward to backing out of that very soon.”

Commerce Secretary Bobby Hitt also chimed in to give an update on the state’s hemorrhaging tourism and hospitality industry.

“Half of our hotels are closed right now. All of our restaurants are closed. So we're seeing a great impact on that piece of our economy," Hitt said.

Larger manufacturers like Boeing and BMW may have shuttered plants for a time, he said, but are easing back into production.

Since mid-March, businesses across the state sent more than 2,000 inquiries to the S.C. Department of Commerce, Hitt said, many of which were answered within 24 hours. The department hosts an online resource page on its website for aiding businesses as they navigate whether they qualify for essential or nonessential status.