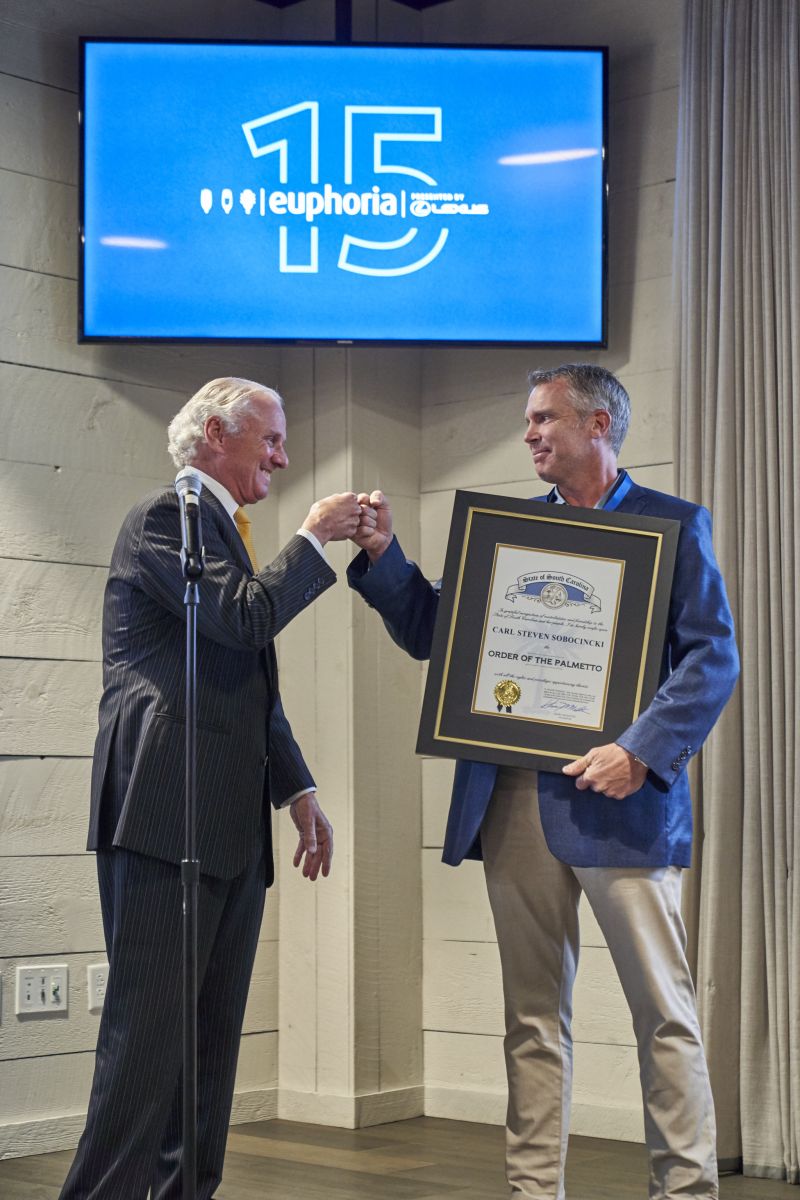 When Table 301 Restaurant Group owner Carl Sobocinski got dressed and left his home for the opening soiree of Greenville’s Euphoria festival, he had no idea that he would return with the state’s highest civilian honor.

Sixty-four socially-distanced guests had gathered for the dinner — many Sobocinski’s long-time friends — and a screen was rolled back as euphoria’s board chairman welcomed people in the crowd. Sobocinski began to sense that something was afoot.

“I was like, ‘Ok, they’re going to embarrass me and do something for the 15th year anniversary of something we did a long time ago,’ and next thing I know, Bruce Bannister stood up — he and I were classmates at Liberty Fellowship and he’s in the House of Representatives in Columbia — and then he introduced the governor. And I said, ‘Ok, this is something bigger,’ but even at that point, the Order of the Palmetto never crossed my mind until the governor started speaking.”

The Order of the Palmetto recognizes a person’s extraordinary lifetime service and achievements of national or statewide significance, according to a news release. For the Table 301 executive, it honors his contributions over the years to the state’s hospitality sector, culminating in his leadership during one of the most challenging years yet for the industry.

“Carl represents the epitome of a highly effective, caring leader in the restaurant industry,” John Durst, president and CEO of the S.C. Restaurant and Lodging Association, said in a release. “We are extremely fortunate to have the benefit of his passion, experience and community-based service. His recognition as a recipient of our state’s highest civilian honor, The Order of the Palmetto, is an unreservedly well-deserved acknowledgement of his extensive contributions, service and accomplishments.”

More than 22 years ago, Sobocinski spearheaded the growth of the Table 301 Restaurant Group into seven restaurants: Soby’s New South Cuisine, The Lazy Goat, Nose Dive Gastropub, Passerelle Bistro, Highway 301 Food Truck, Southern Pressed Juicery and Table 301 Catering and Kitchen. In 2005, he and singer-songwriter Edwin McCain co-hosted the city’s first euphoria festival after sewing the seed for downtown Greenville’s Saturday Farmer’s Market in 2003 by going from farm to farm to get the Upstate’s agricultural leaders behind the initiative.

Sobocinski also was a key figure in lobbying for Sunday alcohol sales in restaurants, going door to door to attain 10% of registered voters’ signatures for the initiative, according to the release.

Over the years, Table 301 Restaurant Group has donated more than $2 million to the Greenville community and delivered an average of 3,200 community service hours. Greenville’s Brunch for a Cause, founded to raise funding for victims of natural disasters like Hurricane Katrina and most recently for Bahamians impacted by Hurricane Dorian, is also rooted in Sobosinski’s efforts in 2005. The event has raised more than $100,000 for the Red Cross since inception, according to the release.

Admitting that the event leading up to the awards ceremony still feels surreal for him, Sobosinski said, “I’m overwhelmed. I’m humbled. I’m honored, and I look forward to the challenge of continuing to give back and be impactful in this community and around the state. It’s an incredible honor that I graciously accept and look forward to living up to.”

At the conclusion of another event in Greenville, 2020 Law Enforcement Appreciation Day, Seabrook Marchant, president and broker-in-charge of Marchant Real Estate and founder of LEAD, was also honored with the Order of the Palmetto for his service on the city’s Civil Service Commission and through the annual event. 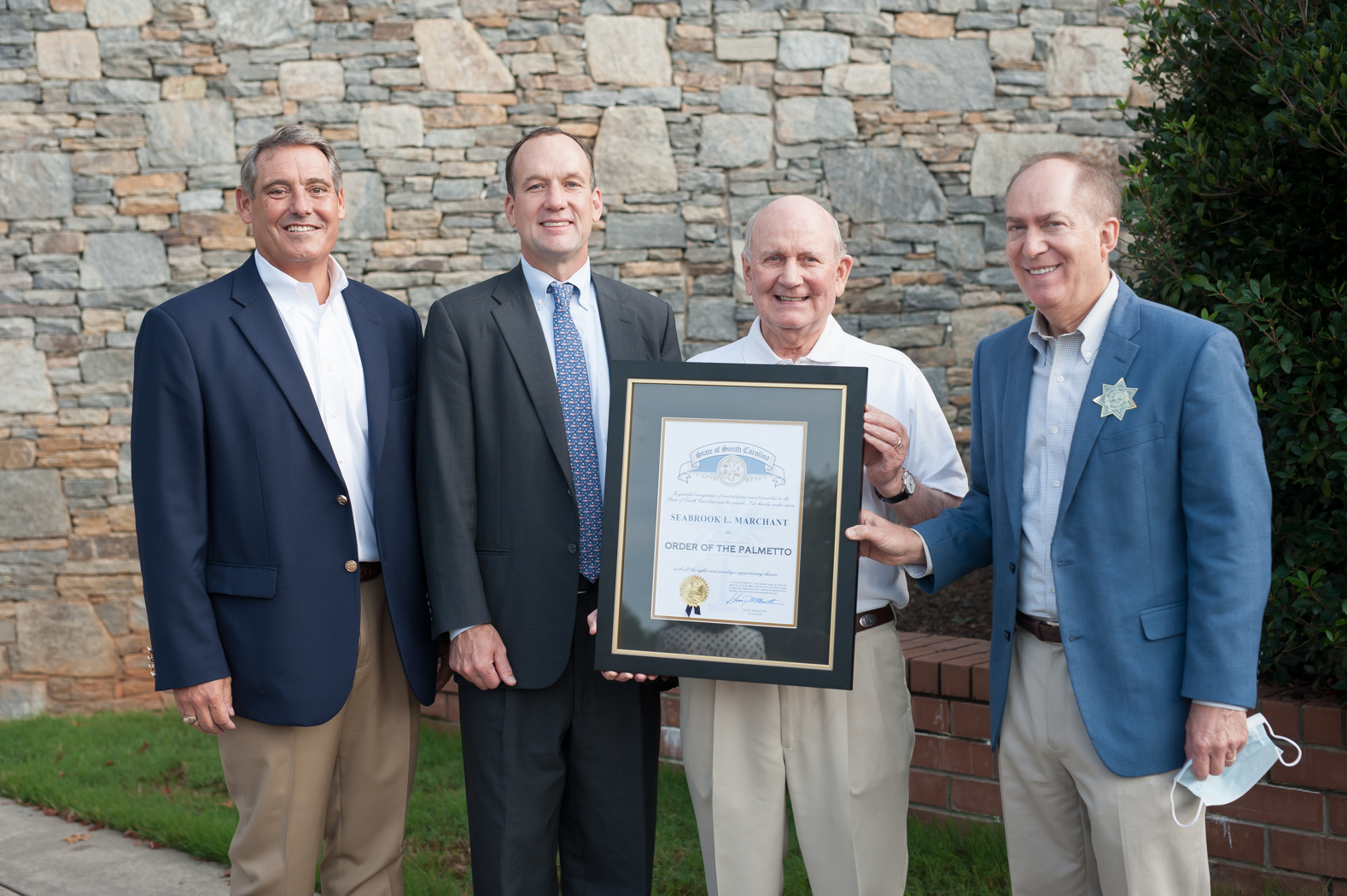 In 2014, Marchant saw a crowd of officers awaiting breakfast at Tommy’s Ham House and put their breakfast on his tab to show his appreciation, according to a news release. This tradition continued and picked up speed with additional sponsors and municipal offices each year until it outgrew Tommy’s Ham House and poured into the Westin Poinsett in 2019.

This year, officers were recognized today from 6 a.m.-9 a.m. with a socially-distanced drive-thru breakfast hosted at the Greenville Convention Center. S.C. Sen. Ross Turner presented the award to Marchant this morning at the event.

“I am so grateful and humbled to have an organization like LEAD in our community,” Greenville County Sheriff Hobart Lewis said in the release. “Through their various efforts, LEAD has provided much needed and continued law enforcement support throughout the years and their efforts have undoubtedly boosted morale within the ranks at our wonderful agency. LEAD Greenville sets the standard for recognizing the unwavering service of area law enforcement, and I am forever thankful for their service and all their supporters.”