Moonshine grows in legitimacy from its bootlegging beginning

Moonshine. White lightning. Mountain dew. Whatever you call it, the distilled spirit made in hiding under the moon has gained legitimacy. With the passing of microdistillery laws, moonshine and whiskey distilleries are popping up in cities and towns across the Upstate.

Trey Boggs, who along with his brother Bryan is founder and owner of South Carolina’s first legal distillery, Palmetto Moonshine in Anderson, said the ease of getting approval and licensing has made the process easier for distilleries to open. It wasn’t quite that way when the idea came to his mind. 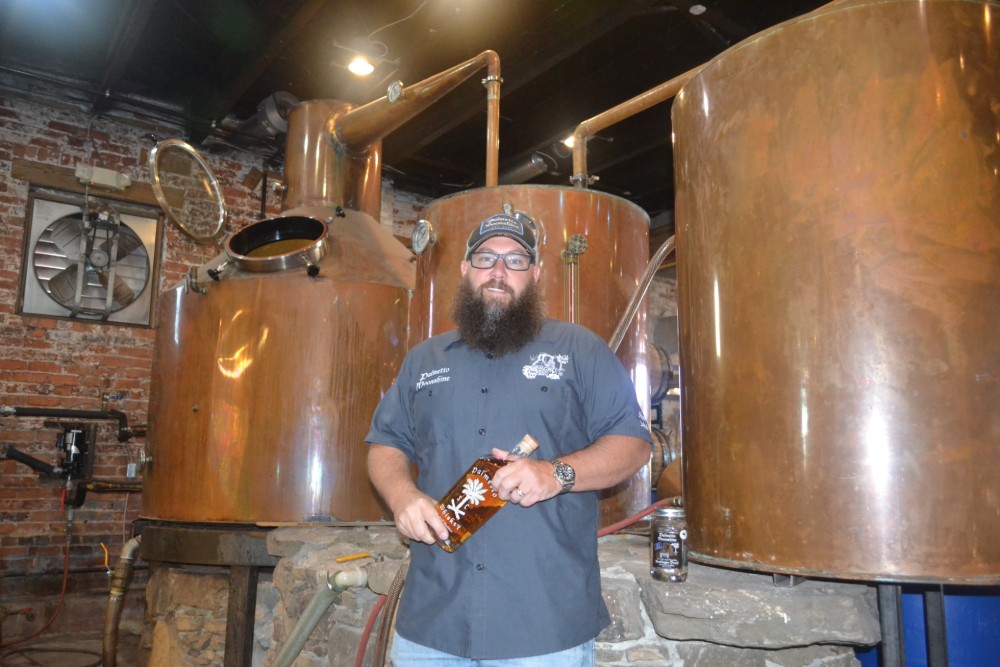 “About 2009-2010, I was reading about a moonshine still bust in Spartanburg County, and I was like ‘Why does the government hate moonshine?’ Then it hit me: taxes. That’s what the government wanted,” Boggs said. Becoming even more curious, Boggs read what he calls “the extremely boring” Department of Revenue book and he thought “What if?”

“I didn’t know anyone at the time who tried making moonshine and pay taxes on it, so I stayed up reading the book, waiting for Department of Revenue to open at 8 a.m.,” he said.

His call didn’t start out easy, though. He said the woman who answered the phone laughed when he said he wanted to put in an application to make moonshine. She said he couldn’t do that. “I cited the section on micro-distilleries to her and said the law changed around 2009.”

The process is fast-tracked now, with applications and processes online.

“When I did it, I had to go through snail mail,” Boggs said. “It was a year-and-a-half process to get our license for Palmetto Moonshine.”

Other distilleries that have opened in the Upstate since the 2011 opening of Palmetto Moonshine include Dark Corner Distillery in Greenville, Motte & Sons Bootlegging in Spartanburg and Six & Twenty Distillery in Powdersville.

Dark Corner Distillery owner Joe Fenton was inspired by the stories that became a part of sharing spirits with friends. Fenton’s bio on the company website says he “always loved a good story.” During his days as an electrical engineer, he would gather his coworkers in the parking lot after work and invite them to share stories over a jar of moonshine. One day, as he and his friends were engaging in their nightly ritual, it hit him: “What if I built a place where people could share stories and great spirits all day?” He opened Dark Corner Distillery in 2011, according to the website.

Motte & Sons Bootlegging, in Spartanburg, is in a 5,000-square-foot building that formerly housed Pittsburgh Paints at 220 E. Daniel Morgan Ave., near the Spartanburg Marriott. It distills whiskey, vodka, light and dark rums and brandy.

Six & Twenty Distillery plans to open in the fall at Poe West, a mixed-used development in The Village of West Greenville. The Poe West location will be an expanded concept of the distillery’s first location in Powdersville.

While laws have made micro-distilleries legal, there is still an element of secrecy to the process. Boggs said authenticity is key to the operation of Palmetto Moonshine. While the spirits aren’t brewed under the light of the moon, Boggs follows a bootlegger recipe and uses equipment crafted in the fashion of what the bootleggers used.

For the equipment, Boggs went to a man who made “yard art,” he said, using air quotes.

“We started with a 250-gallon still. We found a man who made ‘yard art’ and asked him if he could make a bigger piece,” Boggs said. That bigger piece is a 1,000 gallon still.

“We have worked hard to keep it as authentic as we can and it makes you realize how hard moonshiners had to work … under moonlight and without power,” Boggs said. “And not only just getting it into the woods, but operating at night and they also had to do it while constantly looking over their shoulder for revenuers.”

Boggs said people have asked him how he knew how to make moonshine.

“We learned from three true bootleggers,” he said.

“But it’s not like you can just call them up. Someone has to know someone then trust has to be established. We were able to get to these three guys and take the best of how they made their moonshine and that’s how we created Palmetto Moonshine,” Boggs said. “And now, what better location to make moonshine than behind the courthouse?”