The announcement in September that construction had started on a Home2 Suites by Hilton in downtown Anderson is part of a larger plan for development in that area, according to David McCuen, Anderson city manager, who said the hotel project was three years in the making.

“It’s been something we targeted — a vision for the city,” he said. “We have The Bleckley Inn, a successful boutique hotel, but we needed more. While we have hotels out on the interstate for travelers, Clemson fans and people coming to the lake, downtown Anderson is a niche market and needs amenities for travelers.”

McCuen said the trend for travelers is to park their cars once they check into a hotel and walk to dining, shopping or entertainment venues. Downtown Anderson wants to provide that opportunity.

The $20 million Home2 Suites is being constructed at the corner of South Main and East Market streets. 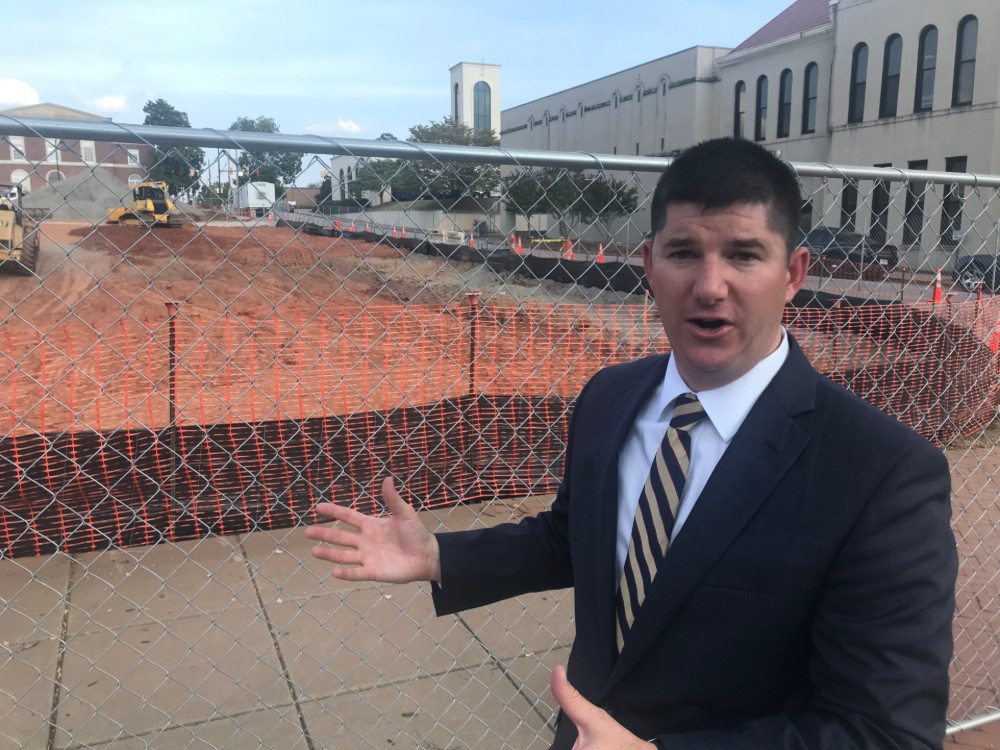 The general contractor for the development is Van Winkle Construction in Greenville. The site contractor is Fontaine Construction of Anderson. The developer is Main at Market LLC, a new partnership between Paragon Hotel Co., headquartered in Anderson, and Steve Timmons of Greenville. Paragon Hotel Co. also will function as the management company overseeing day-to-day activities once the hotel opens, according to a news release announcing the hotel groundbreaking in September.

In addition to 107 guest rooms the hotel will feature shopping and dining options and a parking garage, according to McCuen. Amenities include conference rooms and meeting spaces along with an outdoor fire pit and swimming pool.

“This important economic development project has evolved thanks to the efforts of many people. Our mayor and city council are to be commended for their visionary leadership throughout the process,” David McCuen, Anderson city manager, said in the release. “We appreciate the support we’ve had from Anderson County and the professionals from Main at Market during the planning phase. And we also appreciate the support we’ve had from the public. We look forward to working with Van Winkle and Fontaine as the process moves ahead to completion.”

Construction is expected to be finished within two years.

McCuen said downtown Anderson is growing in popularity and that can be seen in the numbers. In the last 15 months, 23 new businesses opened downtown.

An effort in creating an entrepreneurial pipeline is feeding that business growth.

“We have a citywide economic development office that offers programs for entrepreneurs and creates that pipeline. We’ve trained 412 entrepreneurs in the last 15 months,” he said.

Another area of growth downtown is in office space. McCuen said that in the last year two companies have opened offices in a 55,000-square-foot former bank building at 201 N. Main St., a building that once stood empty. One of the companies is the hospitality division of WestPoint Home LLC, which moved to downtown Anderson from Clemson.

“They have around 60 employees with an average salary around $85,000,” McCuen said. “They occupy two floors of the building.

“The other company is HMR Veteran Services, with about 50 employees. That brings the occupancy to 110 people in a building that was once empty,” he said.

Downtown Anderson is in store for more changes, according to McCuen, but he isn’t ready to be specific. One change is in an acre lot behind the historic courthouse in the middle of downtown, he said.

“Right now there’s a fence around it. There’s a project moving forward there and there will be some supporting projects to that one,” he said. “It’s one to come for sure and it’s going to be a game changer. It doesn’t compete against the hotel and adds more value to downtown.

“We have some other major projects in the pipeline that are going to happen.”