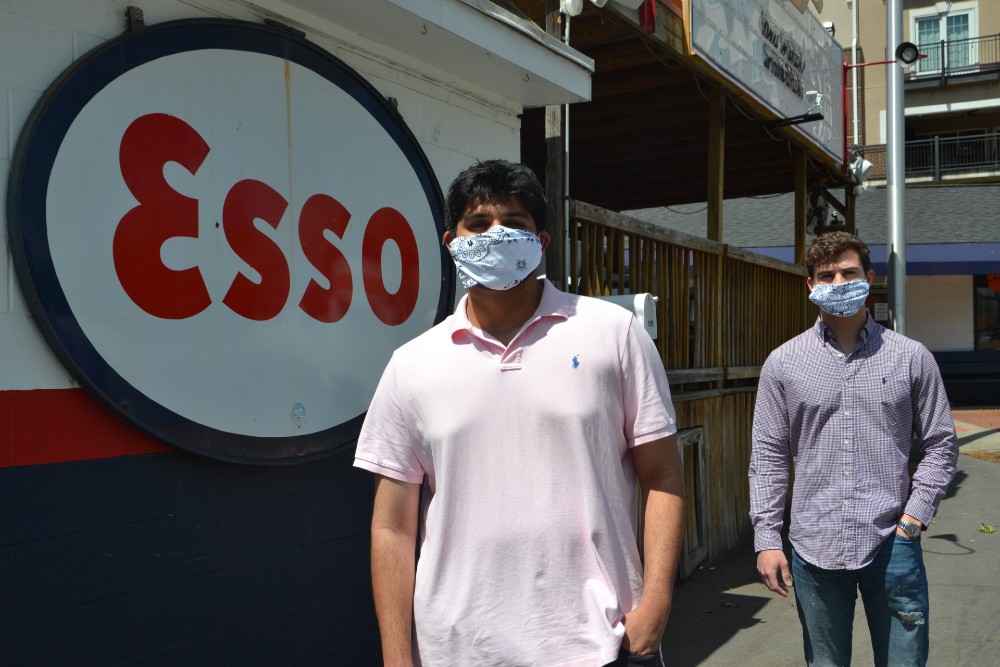 Suds had a notion.

Sudarshan “Suds” Sridharan did not like what he saw as the Clemson sophomore drove through his town. One door after another was closed and the lights off along Clemson’s main street, College Avenue.

For the college student in him, the energy was gone, the silence was eerie, lonely. For the entrepreneurship and financial management major in him, the silence of the cash registers and card readers behind those locked doors was foreboding.

Aside from the university that gives the town its name, the heart of the city of Clemson lies along the sidewalks of College Avenue, he said, especially the bars and restaurants that make the now-quiet streets lively on April evenings of any other year.

“It’s a staple,” he said of College Avenue. “Clemson would not be Clemson without it.”

Sridharan’s notion was that he could help. He shared that notion with friend and fellow student Jack Feinstein, a 20-year-old studying computer science.

Three days later — and just two days after the governor closed restaurant dining rooms statewide to compel social distancing and tamp down the threat of COVID-19 — the two entrepreneurs launched SaveMAPS, for Save Mom-and-Pop Shops, which is found online at savemaps.io.

SaveMAPS is a not-for-profit online directory that enables people to buy digital gift cards from restaurants. The site also handles payment processing for establishments that can’t process online payments. The funds go directly to the business at the end of each day. It’s a way for people to put money into the hands of the business operators now and use the digital gift card later.

Within days, the team running the organization had grown to five. At the time, Clemson students were on spring break and spread around the country. As word of the effort spread among students, some of them suggested the restaurants near their home towns could benefit, too.

One of them was Nick Stefanchik, who was at home in Myrtle Beach where his father runs a business.

“My dad has a restaurant in Myrtle and so that was some of the heart behind seeing if we could expand, and then as soon as that idea came to mind, there was significant user demand,” said Stefanchik, who now is back in Clemson to oversee daily operations and development for SaveMAPS. Myrtle Beach was assigned a page on the site and soon residents there could buy digital gift cards for 18 restaurants there.

“A lot of the pages we have added for different towns have strictly been out of users contacting us and wanting them to be aggregated,” he said. “We had Harrisburg, Pa., within the last week. We had significant demand from there. It’s basically every day that we add a new town.”

Three weeks into the enterprise, SaveMAPS was helping restaurants and bars in 16 cities in five states. Sixteen people were working on the project, 11 of them Clemson students or alumni.

The team doesn’t know exactly how much revenue the site has generated for the restaurants because most of them process their own gift cards. But based on conversations and those cards processed directly through SaveMAPS, the revenue generated was estimated at about $20,000 during the first week of April. The entire value of the purchase goes to the restaurant, and the buyer pays a 2.9% processing fee, which goes to a processing company, not SaveMAPS. The average sale is just under $50.

“We’re actually losing a little but we’re not worried about that,” Sridharan said. “We all own other businesses. We just want to make sure that we come out of the other side of this thing (the new coronavirus pandemic) stronger. It seemed like it would really help a lot of people and it has so far.”

One of the beneficiaries is Palmetto Smokehouse and Oyster Bar, owned and operated by Jim Oswald. Like all of the restaurateurs who aren’t closing until the COVID-19 storm is over, he’s finding ways to keep things going by changing normal operations to deliver food curbside.

“It’s not only a very helpful and useful thing that they’re doing, but it’s also one of those things that makes the Clemson community very special,” Oswald said of the SaveMAPS team. “There is a bond between the community and the university. I don’t think there is any place better where the people care about the students and the students care about the people in the community. The appreciation — we can’t even express how much we appreciate this.”

Oswald said one highlight of a low time has been finding new customers or, rather, being found by new customers.

“We’ve gotten business out of it,” he said. “I think a lot of people that had never heard of us before know where we are now.”

Sridharan said he thinks SaveMAPS can continue to help mom-and-pop shops long after the COVID-19 crisis is over.

“We’re looking at 11% unemployment a month into this thing. That’s going to have first, second, third, fourth layers of impact,” he said. “We haven’t even started to imagine how that’s going to feel. And so I think it’s going to take a lot of people, a lot of manpower, a lot of resources to help figure out solutions for that. And so if we think we can help with that, then I think we should stay open. We should keep going as long as we can.”

This article first appeared in the April 20 print edition of the GSA Business Report.