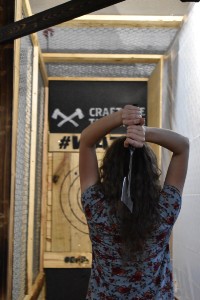 One of downtown Spartanburg’s newest tenants opened just in time for patrons to try a hand at this year’s World Axe Throwing League competitions.

Craft Axe Throwing’s eighth location opened in the Hub City a little over a month ago under RJ Rockers Brewing Co., following Greenville’s ribbon-slicing two years ago at Hampton Station, and is ramping up for league competitions starting on Sept. 15 at 7 p.m. League play launched earlier in the spring but was halted because of precautions concerning COVID-19.

“Basically, any store, if you have six or more members, can get certified. So we have certified judges in this location … it’s an eight-week tournament,” said Andrew Armstrong, assistant store manager. “The first seven weeks, you’re building yourself up on the leaderboard. The eighth week is the actual tournament, which is set up like a double elimination. So you lose twice, you’re out, but if your score is high enough, you can move up to regionals and that’s the one that’s televised on ESPN 2.”

The ax-throwing range offers members the chance to play for standard, dual and big ax leagues, and is seeking out additional competitors for the season. According to Armstrong, they’re hoping both veterans and novices of any size and stature will look into the opportunity.

Still, those who think they don’t yet have the competitive edge for the league are more than welcome to hone their blade as a spectator or patron in the meantime, he said. Groups under eight can reserve a steel-wire-lined lane, capped by a wooden bull’s eye, for $20 per hour and peruse the nearby bar, stocked with a supply of beers from RJ Rockers.

“We try to keep it kind casual,” Armstrong said. “We don’t want it to be a super tense environment. So a lot of people will come in, drink, throw, socialize — that kind of thing.”