For Julia Belcher and Jennifer Lion, their dream of opening a taproom was one they didn’t know they had.

Both moved to Greenville more than a decade ago and fell in love with the city. So much so that they would eventually open People’s Tap, an homage to Greenville’s burgeoning food and beverage scene.

The People’s Tap concept was dreamt up back in 2019, after years of planning, obstacles, successes, redesigns and research on beers. Now, the taproom, which is located at the RiverPlace development in downtown Greenville at 250 Riverplace, Suite B, is officially open.

Belcher, People’s Tap partner and general manager, and Lion, also a partner, have been friends for around nine years when they met in Greenville. Both are Ohio State alumni and enjoy visiting breweries and hiking together, but their friendship was essentially centered on the up-and-coming food and beverage industry in Greenville, said Belcher. They both even held hospitality positions in between the journey to the People’s Tap.

“As time went on, we thought, wouldn’t it be great if we owned a place of our own?” said Belcher. “It took a while to get it going, but now we are in an incredible location, although we weren’t originally looking at a downtown location.”

But then — much like other new businesses starting out amid the COVID-19 pandemic — there were some challenges.

The pair had considered opening the taproom on the outskirts of the city limits, as more of a neighborhood spot, such as in the Overbrook area, and hadn’t considered downtown in the earlier stages of the process.

For their first potential location, virtual zoning meetings — the result of the pandemic — created a bit of uncertainty in the planning process.

“When we did it, we thought everything was good and didn’t really comprehend the longevity of the process, but then frustration over the process grew over time as the pandemic continued, and we were working full-time remotely, too, wondering what we do we do next?” said Belcher.

They saw how the pandemic affected other businesses but also how amazing and creative the Greenville community is, said Belcher.

“We had to figure out how to navigate through the situation and saw breweries trying different things, and we try our very best to stay away from paper menus for sustainability purposes,” she added. “Two years ago, scanning a QR code was uncommon and now everyone knows what to do. The pandemic really changed the food and beverage industry, and we incorporated that into our business.”

Checking all the boxes

Belcher said they had worked with the same Realtor over the years, and he pushed them to look at a  location overlooking the Reedy River downtown. 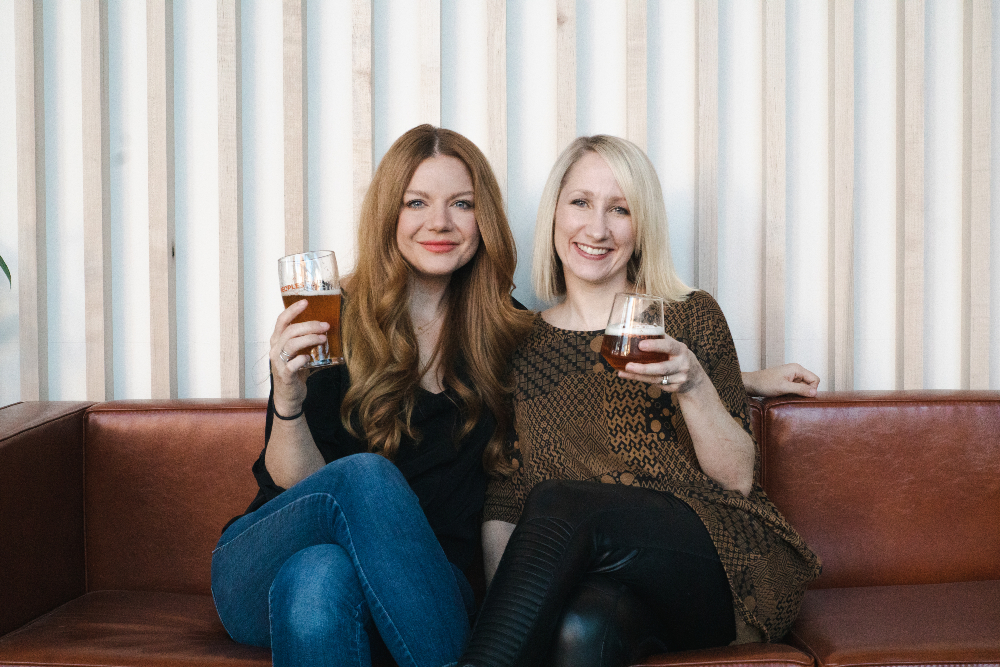 “We absolutely fell in love with the space as soon as we walked in,” she added. “It just checked all the boxes on our wish list, and the stars aligned after that.”

The partners were going for a traditional taproom feel that is elevated, said Belcher. For example, the floors are concrete and there are raw, intricate woodwork features but also a marble bar top and a modern fusion of design.

“We wanted to cater to a wide variety of patrons, so everyone feels comfortable in this space, and the windows that allows for a lot of natural light and overlooking the river invites natural outdoor scenery into the bar,” said Belcher.

Bartron Builders and architecture firm Fathom Firm were the construction and design partners.

Once construction began, Belcher said it took around four months to complete, so that was the smoother part of the process.

When asked what the People’s Tap offers that sets them apart from similar businesses, Belcher said customer engagement plays a critical role in what they do.

They have an interactive menu, which allows customers to leave direct feedback in their inbox on what they like and don’t like.

“We have patrons set the stage to set us aside and chat about their experience,” said Belcher.

With the location being right on the Reedy River, she added, and easy access to the Swamp Rabbit Trail, they also wanted bike racks added to the front of the building.

“Although we are craft beer-focused, we also try to present regional and local beers, as we have an amazing beer community right here in Greenville,” said Belcher.

They also feature international beers, and a tap is dedicated to the “People’s Tap,” which rotates different macros such as Michelob Ultra and Bud Light. If you don’t like beer, they also offer a variety of wine, ciders and seltzers.

And, with Papi’s Tacos and The Lazy Goat located near the Peoples Tap, patrons may have food delivered to the taproom but also welcomed to bring their own food as well.

A focus on the community

Although People’s Tap draws a lot of locals, Belcher and Lion also feel they are part of energizing this space and area, a concept that taps into the tourists wants as well being close to hotels, The Peace Center, and other venues opening soon, said Belcher.

“I think what we bring is a great way for tourists to get a sample of Greenville, being so close to the river and showcasing a lot of our local beers,” she added. “We are also both community-focused.”

Belcher worked in nonprofits, while Lion worked in zoology. “We wanted to support the Greenway, other parks in the area, and engage the overall community around us who have already shown so much support.”

In addition to community support, said Belcher, they have been reached out to by other female entrepreneurs who have congratulated them on the opening while offering their support as well.

“With news outlets reaching out as well, we are so happy people want to hear our story,” said Belcher. “This project has been years in the making, and we were worried about people showing up and how it would translate in the community, but Greenville really has showed up and we were at capacity most of the day we opened.

“We have had people tell us that it's warm and inviting, from the training of our staff to the space itself. Our customers feel comfortable here, and that’s what we want, for all people to feel invited.”