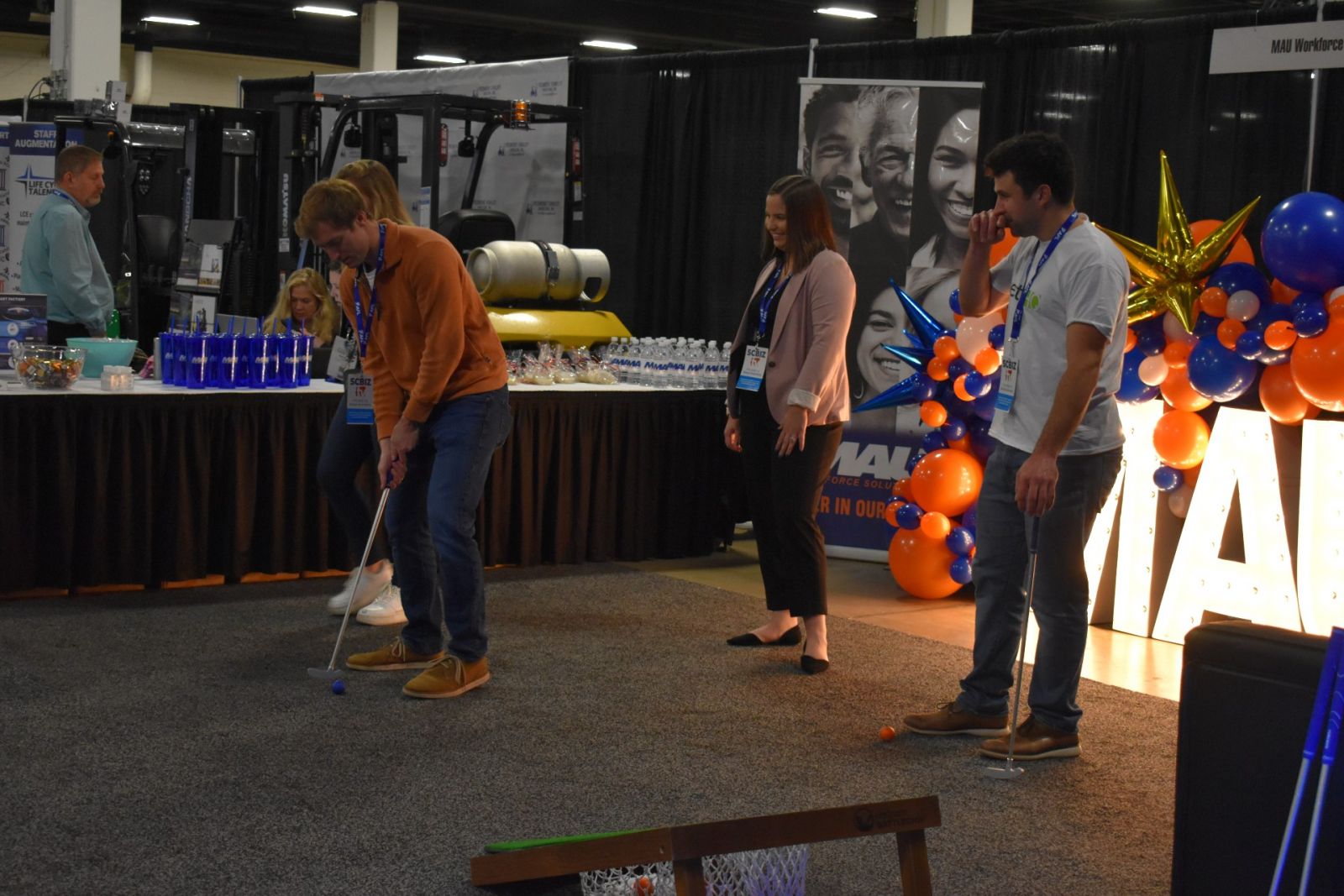 At the first S.C. Manufacturing Conference and Expo to go live since 2019, workforce concerns loomed large but they were far from being an elephant in the exhibit hall.

Jenkins said the conference had a solid turnout, and its four main events were sold out.

“The floor was buzzing. There was well over 1,500 people on that floor at any given time,” he said. “People just wanted to get out, see each other and shake each other’s hands, have conversations and just do some networking that they haven’t done in two years.”

Especially networking that might bolster the state’s talent pipeline or ease the need for labor during a time of near-record low levels of unemployment.

Columbia Southern University and Anderson University booths were nestled between displays of industry leaders, while Greenville Technical College invited participants to try their hand at virtual welding. Staffing firms such as Hire Dynamics and MAU lured prospects with a putt-putt course and the dazzle of toddler-sized marquis letters.

Manufacturers and software companies alike engaged visitors with tech solutions able to speed up the employee training process or skip the need for some positions altogether.

Greenville’s Gemba Systems demonstrated how their digitization platform can use virtual reality to teach trainees how to repair a carburetor, while FANUC and other competitors flexed robotic arms at their booths.

And no matter what topic speakers broached, business leaders didn’t shy away from queries about finding talent to fuel future plans.

SCBIO CEO James Chapell spoke on breaking down silos between and within industry, economic development and higher education to open communication channels on the state’s talent pipeline during his panel discussion on the life science industry.

“There’s a little bit of translation that goes on,” he said.

During an interview with SC Biz TV, Upstate SC Alliance CEO John Lummus covered two workforce initiatives his organization has led over the past few years: MoveUp and SkillUp.

MoveUp is a marketing campaign, launched in 2019, created to attract talent outside of the Upstate.  The site featured a job board and information on the region’s quality of life. SkillUp was a later development — a very successful one Lummus added — created in partnership with the state’s technical college system

“As the pandemic hit and unemployment rates went up to 13% regionwide, we really started looking at how can we help people who have been unemployed and underemployed in our region,” he said. “So we started a subset of MoveUp called SkillUp, and what it does is it connects people looking for jobs with the training that they would need to get those jobs.”

Cynthia Davis, director at the S.C. Commerce Department, shared with SC Biz TV that her team often receives complaints from manufacturers about workers leaving after lunchtime or not showing up for their shift — and that’s with an already limited staff.

“We know that we need more people to move into our state, because we have a fantastic training program here with our technical colleges,” she said, adding that schools' programs are already directly aligned with industry needs. “That’s not the issue. The issue is getting people into our state, into the programs."

Davis often advises existing industries to plot out a workforce development strategy if they haven’t already.

“What are you doing specifically for those emerging workers?” she asked. “What are doing for your current workers to retain them and make your culture that employer of choice? And what are you doing to attract those transitioning workers that maybe are coming out of hospitality or a service industry that we can woo and recruit them on over to manufacturing.”

She dubs these questions “the trifold” of workforce development.

“And if companies aren’t doing that, they’re going to be at a loss,” she said.