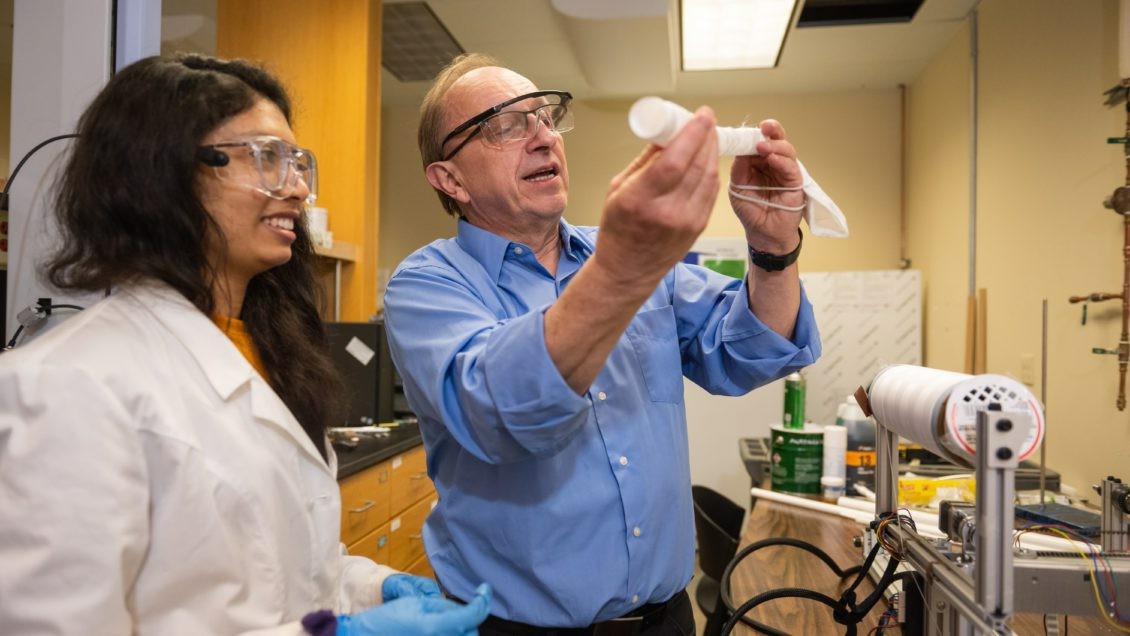 This story first appeared in the May 23 print edition of GSA Business Report.

A research group at Clemson University has developed a self-repairing hose to dispense hydrogen as part of the nation’s effort to diversify its fuel supply.

Hoses that are used to pump hydrogen must withstand high pressure and are prone to cracking when exposed to high and low temperatures and the normal wear and tear of everyday use, according to Marek Urban, who leads the group. The hose’s inner layer is critical, because that is where the damage occurs, he said in a news release.

The hose that Urban and his team have developed makes the inner layer out of a self-healable copolymer matrix with Innegra fibers — a composite that heals itself like skin when it cracks.

A more durable hose for pumping hydrogen could help lower the cost of a sustainable fuel for buses, trucks and heavy equipment, the news release said. The only byproducts from vehicles powered by hydrogen fuel cells are heat and water, with no greenhouse gas emissions.

Urban has been developing self-healing materials for more than 20 years and has considered applications ranging from paint that repairs its own scratches to military vehicles that patch their own bullet holes to self-repairable pet toys. He discovered the hose project while searching for additional uses.

“The idea came from the need for this type of application and combining our technology at Clemson with something society needs,” Urban, the J.E. Sirrine Foundation Endowed Chair in Advanced Polymer Fiber-Based Materials, said in the news release.

Urban is conducting his research with financial backing from the U.S. Department of Energy and the National Science Foundation.

He and his team have used a tabletop robot to repeatedly bend the hose they have developed. Urban said they have shown the hose can withstand up to 10,000 damage-repair cycles under temperatures as high as 158 degrees and as low as 40 degrees below zero.

Hydrogen dispenser hoses now in use tend to develop cracks after 1,000 cycles, according to the release.

The next step will be to work with a manufacturer to make the new hose at a larger scale.

Urban has previously received funding for self-repairing materials from the National Science Foundation and the Department of Defense. He has published his research findings in journals including Science and Nature.

“Dr. Urban’s research into hydrogen hoses is a testament to his leadership in the field of materials science and engineering and serves as an excellent example of how basic research leads to real-world application,” Kyle Brinkman, chair of the Clemson University Department of Materials Science and Engineering, said in the release. “This work not only has the potential to lead to a more sustainable fuel supply but also helps inspire the next generation of scientists and engineers. I congratulate Dr. Urban on his success and look forward to seeing what’s next for his self-healing materials."