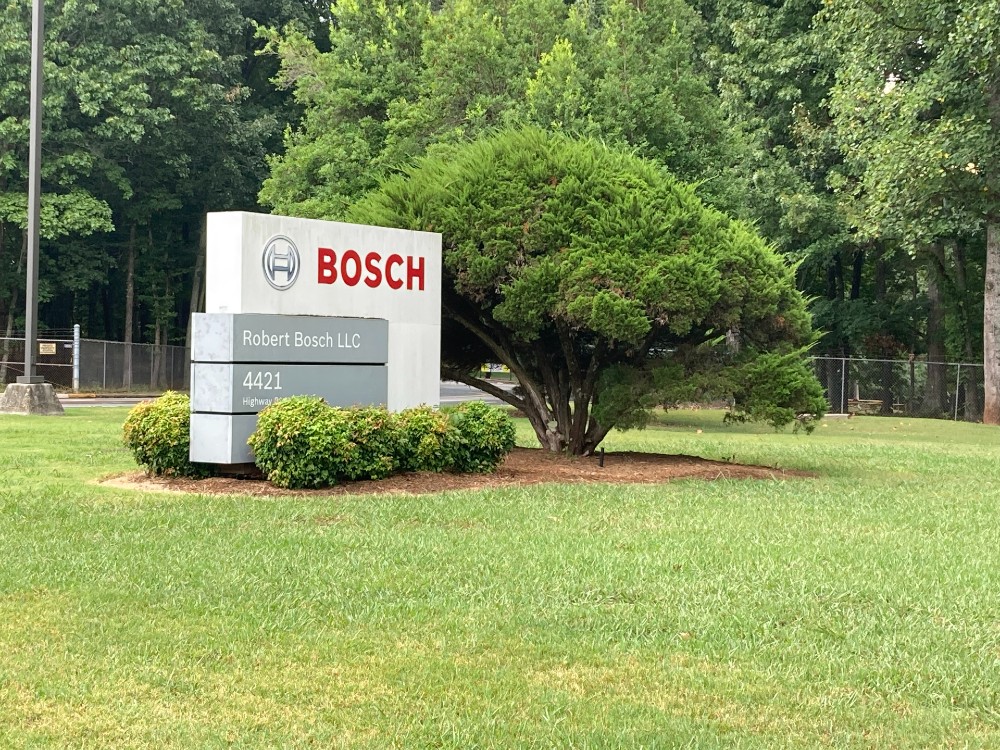 Bosch will invest more than $200 million into its Anderson campus to create the manufacturing capacity to build hydrogen fuel cell stacks that power big trucks. It means at least 350 new jobs by the time production begins in 2026.

Fuel cells utilize hydrogen to produce electricity onboard the vehicle through a chemical process, without combustion. FCEVs are zero-emission vehicles, according to the Fuel Cell and Hydrogen Energy Association. They produce no tailpipe pollution except water vapor. In addition, compared to internal combustion vehicles, FCEVs greatly reduce greenhouse gas carbon emissions even when accounting for the full hydrogen fuel life cycle.

If that sounds like the future, it is, says Christian Kolzem, senior vice president and technical plant manager for Bosch.

Bosch today announced that the Anderson plant will produce stacks, the heart of a fuel cell power module that will propel Class 8 trucks — tractor-trailers, dump trucks and other heavy-duty vehicles.

The kind of batteries used now in most EVs are not practical for Class 8 vehicles because of the size and weight, as well as the time required to recharge. Bosch says fuel cells are so far the only way to make electric big rigs viable. Even passenger EVs require hours to go from empty to full charge, but refilling a hydrogen tank works much like filling a diesel tank and can be done in a few minutes, Kolzem said.

Hydrogen fuel cell development also has the international momentum to be successful, he said.

“The technology is taking off right now, not just in the U.S. with Nikola but it’s also taking off in Germany” and China, Kolzem said. “So it’s not just a little clip that’s happening in one single country.”

The Bosch Anderson facility has already begun work on the expansion to support fuel cell technology. A new building is not necessary because the company bought a nearby building in 2018 and incorporated it into the Bosch campus. Capital upgrades include an estimated 147,000 square feet of floorspace to be developed to manufacture the fuel cell stack as well as support clean room and climate-controlled environments required for quality-critical processes, the company said in a news release.

Suzana Cizmic, vice president and commercial plant manager, said the new product line is not just about future technology but also the future of the Anderson plant.

“The county and state of South Carolina were partners for us to win this business,” she said. “And we want to say that we won the Super Bowl. And why do we want to say that? Because for us in Anderson and in the automotive industry going through the transformation, this is a big deal. This is the future. Actually, for our current associates we have a future and for our community we will have the future secured.”

Cizmic also predicted the plant eventually will have more than the 350 workers predicted in the announcement.

As the core of the fuel cell, the stack converts hydrogen into electrical energy. To improve and manufacture these stacks, Bosch has formed an alliance with Powercell Sweden AB, a Swedish manufacturer of fuel cell stacks, according to the news release. Under the agreement, the two partners will work jointly to make the polymer-electrolyte membrane fuel cell ready for production. Bosch will then manufacture this technology under license for the global automotive market. The stack will complement the Bosch portfolio of fuel cell components to be launched this year.

“In the fuel-cell domain, Bosch already has a strong hand, and the alliance with Powercell makes it even stronger,” Stefan Hartung, member of the Bosch board of management and chairman of the Mobility Solutions business sector, said in the news release.  “Commercializing technology is one of our strengths. We are now going to take on this task with determination and develop this market. Over the long term, the mobile fuel-cell business is potentially worth billions of euros for Bosch."

The company recently announced it would invest more than $1 billion globally to develop mobile fuel cell technologies by 2024.

“The hydrogen economy holds great promise and at Bosch we are all in,” said Mike Mansuetti, president of Bosch in North America, based in Michigan. “This is a significant milestone as we announce the first fuel-cell related production for Bosch in the U.S. to support the growing demand from our local customers as part of a diverse approach to powertrain technology.”

Mansuetti, a Clemson University graduate who once managed the Anderson plant, hinted about a major development in Anderson earlier this year when he addressed the annual meeting of Upstate SC Alliance.

“As our success in acquiring e-mobility business here in the region continues, it’s critical that we have local production capabilities to support our local customers,” Mansuetti said in the news release. “For years, the Anderson associates have developed expertise in producing electronics and sensors, competencies that are very applicable to the fuel cell stack.”

“In order to successfully bring fuel cell technology to market in mass scale, it requires a combination of extensive experience in research and development, systems integration and complex manufacturing process,” Mansuetti said in the release. “Bosch is unique in its ability in all these areas. The work we have already done in commercializing fuel cell technology builds on our extensive experience in developing and manufacturing products for the internal combustion engine at scale.”

Bosch started producing fuel rails in Anderson in 1985. Its operations have expanded to multiple products within the Bosch Mobility Solutions business sector, including sensors and electronic control units for the powertrain.

“The investment and jobs provided by this new technology are significant for Anderson County and for our long-standing collaboration with Bosch as one of the largest local employers,” Anderson County Council Chairman Tommy Dunn said in the announcement.

Look for more details in the Sept. 5 edition of GSA Business Report.