Goodwill Industries of Upstate/Midlands South Carolina and the South Carolina Department of Veterans’ Affairs are banding together to ensure veterans and their families have access to the strongest network of education, employment and family support services, a Goodwill news release stated. 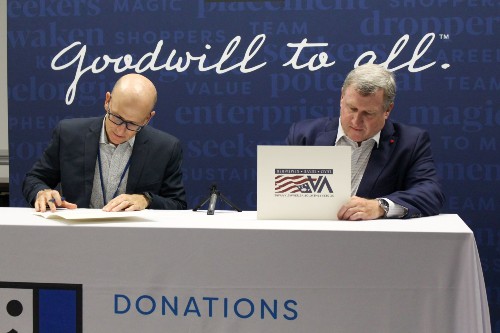 Goodwill and SCDVA signed a memorandum of understanding for the nonprofit to formally join other veteran-serving organizations under the South Carolina Veteran Coalition powered by “Combined Arms,” the release stated. Combined Arms creates a network for organizations to more easily and effectively communicate and identify available services for veterans and their families, and then make referrals as needed.

GIUMSC’s spectrum of programs have long-supported veterans looking for education and employment assistance, directly placing hundreds of the veterans into meaningful jobs each year, the release stated.

“Our hope is that no one who stands up in service of our country ever feels lost, hopeless, or unprepared for life after active duty,” said GIUMSC President and CEO Patrick Michaels in the release. “As an Army veteran, Goodwill was my ‘stepping stone’ to the civilian workforce. Nearly 30 years later, I’m overjoyed with knowing that we now have the opportunity to help others take that same step.”

Goodwill and SCDVA’s agreement also symbolizes an important milestone for South Carolina and the veterans and their families who call this state home, the release stated.

“This MOU is the final piece in establishing complete coverage across all 46 counties in South Carolina,” SCDVA Director of Operations David Rozelle said in the release. “Goodwill has been an important leader in assisting veterans and their families, with or without any agreements, as they organizationally have always looked for and found ways to partner and support our veterans.”

Last year, GIUMSC provided education and career services to more than 10,000 South Carolinians, according to the release.