Deciding whether to own or rent, stay or go, was a long and complex conversation that took place among Greenville Chamber of Commerce board members for more than two years before the move to new offices at Riverplace, 550 S. Main St.

The Greenville Chamber celebrated the final decision with a ribbon-cutting ceremony at the end of January, before showing off the space where employees have been at work since late last year. 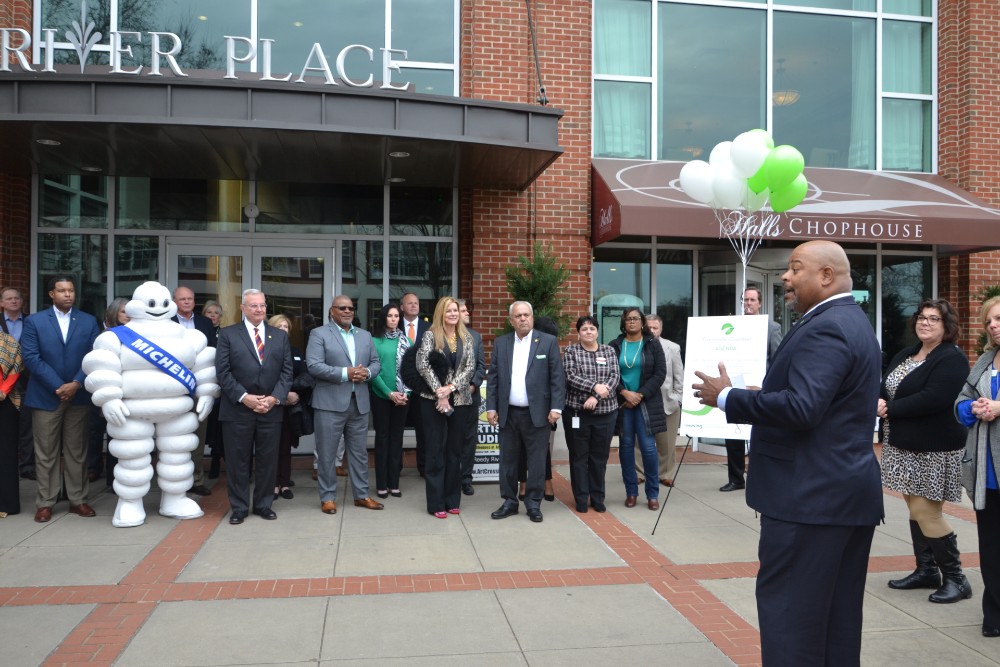 The organization had been at 24 Cleveland St., a building owned by the chamber, for 46 years before moving in November. The change of address was made possible when the old building was purchased by Bannister, Wyatt and Stalvey; Pintail Capital Partners; and Fox Commercial Properties.

Chamber President and CEO Carlos Phillips said proceeds from the sale were put in an investment account and most of the rent for the new space is paid from the interest.

“There are a lot of factors that go into making that decision (to rent),” Phillips said. “We assembled a facilities planning committee made up of several board members to help us assess our options. Part of that assessment included the value of the property that we owned, the cost of renovating that space versus the cost of moving somewhere and renting, or just maintaining the status quo and doing nothing at all, just staying in the space as it was.”

Staying was quickly ruled out as an option, he said. After almost 50 years it needed significant improvements and renovation and the chamber did not want to use investors’ contributions to fund capital improvements.

“And so we considered if we were to sell it, what would happen? And it just so happened that fortunately we were sitting on a real nice piece of property,” he said. “But with real estate you have to make an educated guess on how much more this land is going to appreciate in value. And we figured probably not too much. And so we figured that now is the best time to sell.”

With the sale in the books, the Greenville Chamber put a check by five key objectives that drove the facilities committee: ensure that investors’ resources remain directed toward mission-centric initiatives, strengthen the chamber’s financial position, reinforce the organization’s brand while reflecting the future of the business community, provide a great work environment for staff and become a part of the city’s core business district.

“We were a little concerned going from 23,000 square feet to 9,000, but I think we’ve made good use of the square footage here,” Phillips said. “Today’s office environment has changed significantly and we’re much more efficient and intimate here in our new space. We’re in the heart of the business district. There’s just a different vibe in our new location and staff really seem to be excited about it.”

In the old space, because there were two exits, some staff members would go weeks without seeing one another.

“We had five objectives and based on those five objectives it (the move) made sense for us,” Phillips said. “Other chambers have different financial strategies, visions and missions. But the move met our objectives and was certainly aligned with our vision of a globally competitive, regional economy where businesses succeed and people prosper. And we’re in a space that allows us to execute our mission of leading, convening and mobilizing the business community to drive regional economic growth. So when all of the analysis was said and done, it was a pretty easy decision to make.”

The new offices are also decorated and branded to reflect the Greenville business community.

“It is, I think, reflective of where the chamber and, quite frankly, where our community is going,” Phillips said. “It’s a more forward looking space and reflective of the bright future that we have here in Greenville.”

The move to the fifth floor of Riverplace, owned by Hughes Development Corp., took place after a renovation led by design firm DP3 and general contractor Mitchell Contract Interiors.