The reimagining of a long-vacant factory in downtown Greenville into an "urban office park" is nearing completion.

The Borden project near Unity Park — an adaptive reuse and mixed-use development — will feature more than 30,000 divisible square feet of office space for up to seven tenants.

The project is centered around the historic renovation of the former Borden Ice Cream Factory, which was originally Greenville Ice Cream before changing its name.

The original Borden building structure dates back to 1923, and The Furman Co., the developer on the project, is gearing up to celebrate its centennial with the opening of “Borden” this spring, after breaking ground nearly a year ago, according to Robert Poppleton, The Furman Co. vice president of development.

The Furman Co. is repositioning through this renovation a significant historic project for the Greenville community to feature urban loft office space that’s park-side. Most of the original structure will remain intact except for minor demolition of unsalvageable areas of use or for the improvement of access to space, said Poppleton.

Borden is the fourth significant historic project the Greenville-based real estate development company has taken on in the last decade. It has completed the Greenville Claussen Bakery restoration, where the architecture firm on the project McMillan Pazdan Smith has taken up residence for its offices, Keys Court, where Johnson City, Tenn.-based Yee-haw Brewing Co. resides in addition to CycleBar, and its most recent restoration project, Poe West in the Village at West Greenville.

“When we first came across Borden, we knew there was a story to tell and bringing office space close to the park would be well-received by the community, saving another old building in Greenville for future generations,” said Poppleton.

He said there is a quote on most of their signs that reads: “New ideas often need old buildings,” and that there is something unique about the sense of place that develops over 100 years that new construction can’t simply manufacture.

“We started to dive into Borden’s history, and we were very excited to learn this was an ice cream factory and children from local schools used to come here and get samples,” Poppleton said. “It was a significant place of employment for the community with thick brick walls, exposed wood ceilings and other really cool features. We had confidence Greenville as a community is investing in Unity Park, and Borden will be the first significant mixed-use office space development adjacent to the park. We wanted to be a part of that.”

Located at 711 W. Washington St. in downtown Greenville, Borden will have 125 on-site parking spaces — exclusive to the project and free of charge to occupants and guests — and is also located in an Opportunity Zone, which is a designation and investment program created by the Tax Cuts and Jobs Act of 2017 allowing for certain investments in lower income areas to have tax advantages.

Poppleton said they wanted to keep the name of the modern urban office “park” “Borden” because of its rich history and to embrace what the site already has to offer.

“It’s a tribute to its history, so to speak,” he added. 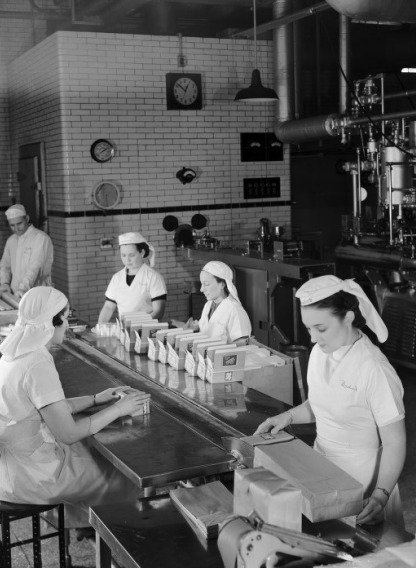 McMillan Pazdan Smith Associate Architect Jeff Tiddy said they have worked on a lot of exciting projects like this —adaptive reuse — with The Furman Co., especially the Claussen building, and they are excited to work on the Borden project, specifically due to it being on the National Park Service’s The National Register of Historic Places list — an official list of the nation's historic places worthy of preservation.

“Historic buildings that are seeking out to be rehabilitated old structures that may have been otherwise demolished versus restored makes for a really fun project,” said Tiddy. “These types of projects, however, are really challenging because there are so many unknowns going into it and you can’t begin to understand during the design process of what those unknowns are, but it is really rewarding at the same time.”

Other partners on the project include Mavin Construction, Thomas & Hutton Civil Engineering, and CBRE is doing its marketing.

In 2019, when The Furman Co. acquired the property, it had designed it to embrace most of its historic features, although the COVID-19 pandemic added a challenge to that plan, as it did to many developers during that time.

“The pandemic disrupted everything including our own development approach,” said Poppleton. “We had to redesign during this period and did so knowing the market would be demanding of new features and a new type of office space.”

Features include operable windows in tenant suites for easy access to fresh air, no central common space, as the developers recognized people weren’t necessarily excited about gathering in large groups in one singular area anymore, an open courtyard with weather protection, every tenant space has dedicated restrooms instead of common ones, and dedicated elevators to access the second level, said Poppleton.

“We feel these features are going to meet what the market is asking for in modern office spaces while giving people control over accessing their own dedicated spaces,” he added. “We know being located so close to Unity Park would be a benefit, an incredible amenity that our future tenants would be easily able to walk to the park. What surprised us even more was just how close it is to the park and the Swamp Rabbit Trail, once the park was completed. It’s a great feature and bonus amenity.”

Let there be light

Back before people heavily relied on electric lighting, buildings built during the time the Borden originated typically had large windows, because developers relied on natural light, so you’ll see that in a lot of historic buildings, said Tiddy. 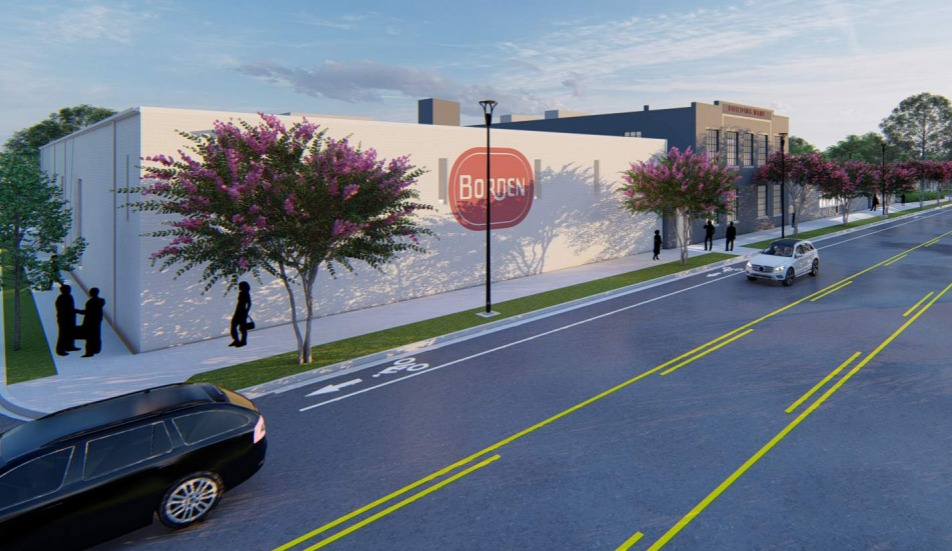 “We wanted to keep that feature and some areas didn’t have windows such as storage areas, so we popped more larger than normal windows that are operable, so tenants get natural ventilation,” he added. “I think we are seeing a market where health and wellness for companies’ employees is vital. Part of that is to have natural ventilation. We are excited to see the next level of innovative exterior for the finished project, areas where we had original brick that we aren’t painting and should have references to its ice cream past, so I’m excited to see where that vision goes.”

Though The Furman Co. is in the process of negotiating leases with two tenants, they have yet to be announced. However, Poppleton said the project has attracted interest from the market in support of their vision for it. He said parking is an important feature of the office building, because it is downtown and most office buildings downtown aren’t able to provide that amenity to its employees or tenants.

Since Greenville is such a vibrant, growing community, part of that growth can only be sustained by providing attractive environments for its businesses, said Poppleton. They are taking full advantage of the Opportunity Zone, because it spurs investments, he added.

“Greenville at large, and specifically into Unity Park district, there is a huge advantage for the city’s economy and our tenants,” said Poppleton. “Along with that comes a fertile place for job creation. These old buildings once repositioned attract creative office users who are entrepreneurial in spirit and striving to grow their companies. We take pride in being a part of that.”