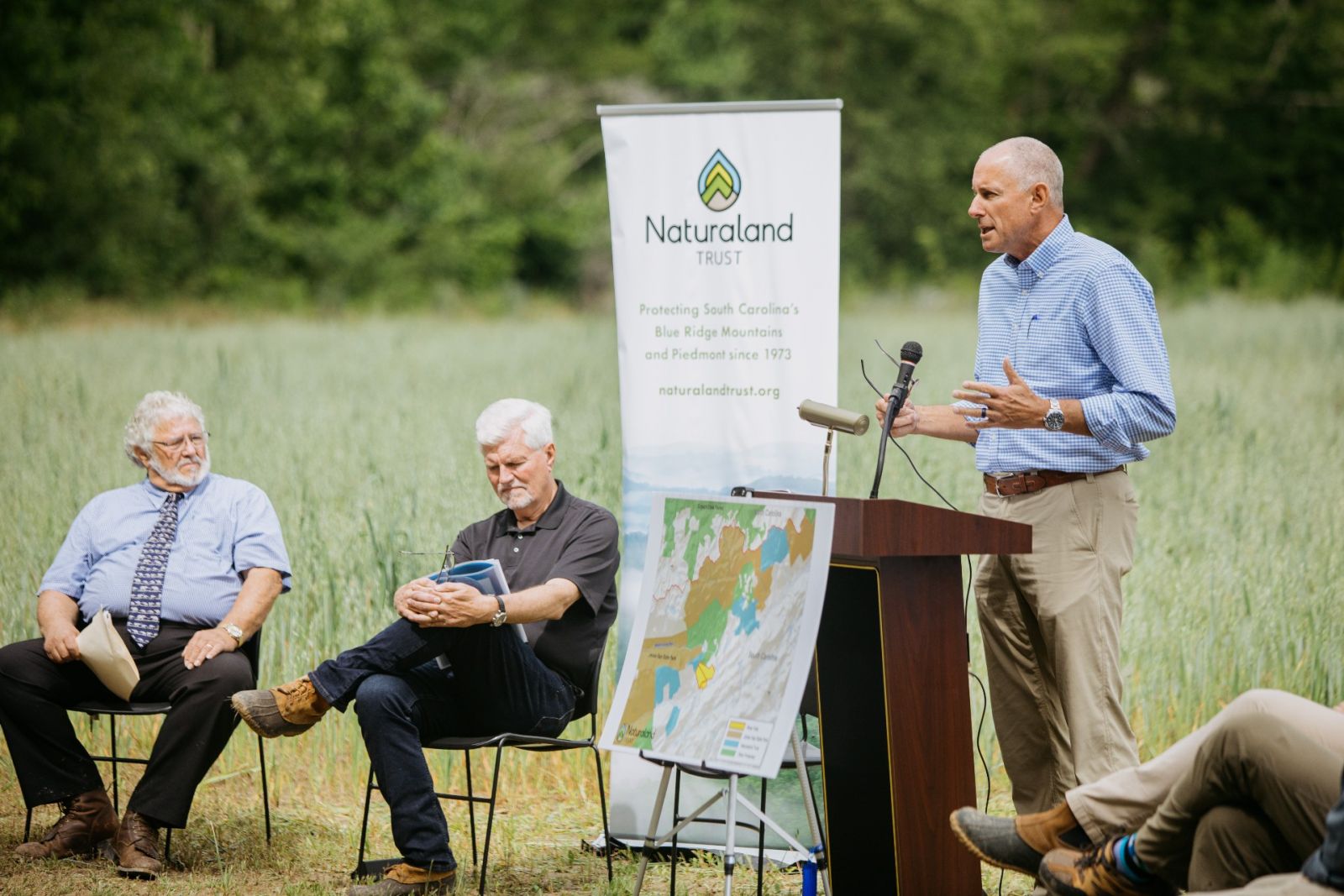 This story first appeared in the June 27 print edition of GSA Business Report.

When the Greenville County Historic and Natural Resources Trust’s first project was completed — the acquisition of 170 acres added to Jones Gap State Park — one partner was an outlier from the typical conservation lineup.

S.C. Parks, Recreation and Tourism; the Naturaland Trust; the S.C. Conservation Bank; and the Open Space Institute are a few familiar faces in the state’s team of land conservators. But this time around, Easley Combined Utilities, a local provider of water, wastewater and electrical services, put its hat in the ring too.

“It just makes a lot of sense for us,” said Joel Ledbetter, general manager of Easley Combined Utilities.

Easley has drawn its drinking water from Lake Saluda since 1970, he said, but over the past few decades, the lake began to disappear under layers of sediment. Not only would less water be available, but it was expected to impact water quality moving forward for the utility’s 100,000 customers.

In 2012, Easley Combined Utilities spent more than $7 million dredging the lake of 360,000 cubic yards of silt.

By 2018, two-thirds of the sediment returned to the upper end of the lake.

“It was not the return on investment that we’d like to see,” he said.

Easley Combined Utilities then hired Melanie Ruhlman of Save our Saluda as a contract watershed manager and began to take preventive action through conserving land in the 200-square-mile watershed. The utility’s first foray was an $850,000 investment in a 225-acre tract on Cooley Bridge Road that was being primed for development. A year later, Naturaland Trust bought the tract for $500,000 in partnership with the S.C. Conservation Bank.

Then Easley Combined Utilities chipped in to help preserve 170 acres of hardwood forest and headwater streams for the Saluda River. Close to 800 feet of the property borders the Middle Saluda River itself.

“Anything that happens in that watershed actually affects us at our lake and our plant, and we just realized that it is a lot more cost effective to conserve and invest in preservation,” Ledbetter said. “And that’s why we started this path along with SOS (Save our Saluda), Naturaland Trust and of course, I work with Greenville County and the conservation bank to preserve this tract that we talked about at River Falls, 170 acres. It was important to us to participate.”

The utility head noted that the quest for preserving the watershed is a long-term investment that will outlast his time at Easley Combined Utilities. He’s heard of few counterparts who have taken the same initiatives.

But he has seen industries — including those within the Saluda Watershed — that have become much more conscious of their impact on the environment and drinking water.

“We have a local business here that discharges into our waste stream, and when they’re trying to get business, their customers want to see if they’ve had environmental violations and impacts. And that goes into them being able to get business,” Ledbetter said.

S.C. Parks, Recreation and Tourism is collaborating with the Open Space Institute to draft a funding proposal with the federal Land and Water Conservation Fund to allow the property to exchange hands, according to an announcement. The public will be able to access the property once it goes under state park management.

“As we take over ownership, we are working to identify how to most effectively and strategically protect the new area and share it with visitors,” Duane Parrish, director of S.C. Parks, Recreation and Tourism, said in the announcement. The property’s unique landscape offers significant possibilities to increase public access, and our list of potential projects currently includes adding much-needed parking, creating wheelchair-accessible trails, and providing more acreage for visitors to discover.”

According to Raleigh West, executive director of the S.C. Conservation Bank, the property will help one of South Carolina’s most popular parks stem mounting demand that, since the pandemic, has led to parking reservations on busy weekends. A new entrance gateway will offer more opportunities for parking, the restoration of a small farm and access for mobility-impaired visitors.

He also hopes that Easley Combined Utility’s contribution will start a trend as waste and drinking water utilities realize the how much they can save in green by conserving land in their local watershed.

“Easley’s very much out in front on this issue, but I suspect you’ll see more of it in time,” he said, nodding to conservation efforts from electric utilities Santee Cooper and Duke Energy. “But I think this is the first one that actually involves a program from the utilities of trying to save properties that they don’t own.”

The Greenville County Historic and Natural Resources Trust put $100,000 toward the project along with $500,000 from the Conservation Bank. West estimated Easley Combined Utility’s contribution at $70,000.

“For a relatively modest investment, by cultivating and facilitating these partnerships, we’re able to spread the burden around and the benefit among various groups,” West said. “It’s really powerful.”