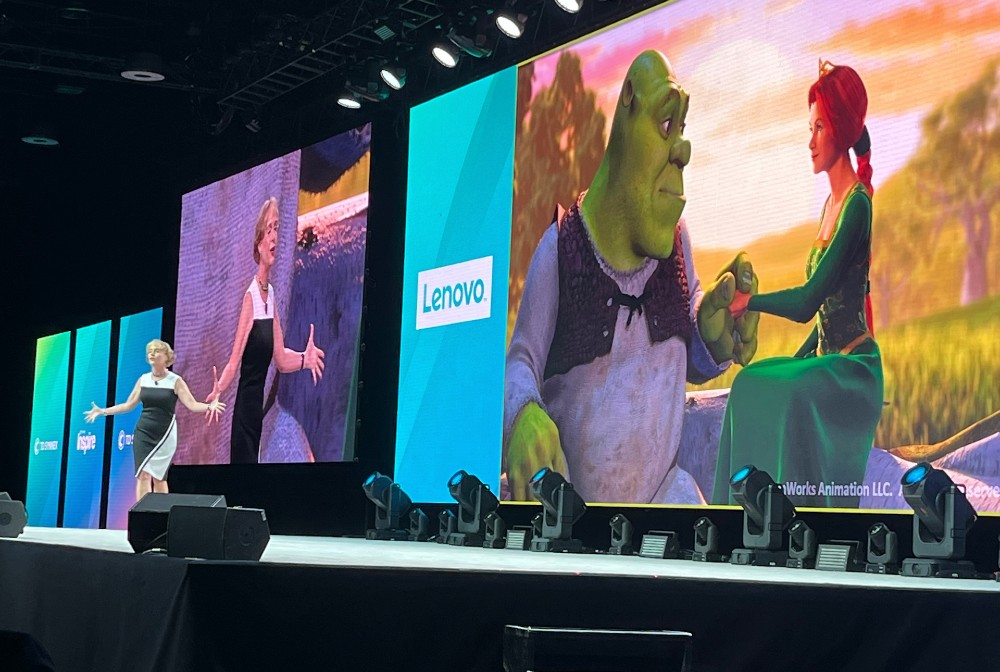 Ever since then, she’s hurtled herself through the role of production manager and now, senior vice president of technology communications and strategic alliances for the studio during two decades of explosive evolution for the field.

“We’ve gone from traditional hand-drawn animation to CG animation; when we started the studio, we were able to release on film every three years,” Swansborg told an enrapt crowd gathered at the Greenville Convention Center earlier this month for TD Synnex’s Inspire Conference. “Now we’re asked to release three films in one year. We’ve gone from having a single headquarters in Southern California to multiple studios around the world to then consolidate back down to that headquarters in Southern California.”

During that time, the company has transformed from relying on scalable multicore computing to cloud data microservices architecture. In other words, the studio now relies on the expanding capabilities of cloud computing where it used to need additional physical hardware to scale up.

Keep in mind that each DreamWorks production runs about 24 frames per second. And for the studio’s typical 90-minute film, that’s 130,000 frames that each undergoes 12 individual creative processes.

“Animation is a wildly painstaking and incredibly artistic process during which the artist will marry that voice to the character,” Swansborg said. “A week in which they are on fire and doing their very best work, our animators might produce five, six or seven seconds of animation.”

An array of digital tools created by Lenovo, distributed by TD Synnex to Dreamworks Animation, has become the studio’s workhorse over the past few years. Today, the studio provides each artist a P920 or P620 desktop workstation.

“And our artists are losing their minds because these machines are so much faster, they have so much more memory available to them,” she said. “Essentially, these systems are allowing our artists to capture their imagination right in the moment. Imagine technology working at the speed of our imagination.”

Each DreamWorks film takes about a four-year period to make.

That process begins with storyboarding: sending a script to 10 or 15 story artists who will each sketch out the entire film from scene to scene about five to six times over two years.

The studios’ team of artists will craft close to 100,000 sketches for each film, according to the DreamWorks executive.

During that time, voice actors will be recorded and then played alongside the storyboard as it is stitched together. In other words, the studio manufactures and tests a story protype.

The studio’s Visual Development Department then begins to transform the black-and-white sketches into kinetic digital artistry.

“They will start to draw and to paint and to clay and to do everything to bring all of those images to life,” she said.

That includes designing how the million individual hairs will move on the 37 different cats featured in the studio’s latest addition to the Shrek universe, Puss in Boots: The Last Wish.

Artists in the Visual Development Department use their workstations to form digital geometric “shells” for each character. These shells are then manipulated through a rig, a system of control points that move the skeletal and muscular systems of each character from frame to frame.

The best way to describe the rig, Swanborg explained, is to imagine digital marionette strings. Thousands of them.

Then come the landscapes, which no matter how otherworldly and fantastic they may seem, require CAD-level architectural design to suspend viewers’ disbelief.

The scaled blueprints are then transformed into the impressions art of towering castles, foreboding forests and sleek boardrooms seen on the silver screen.

“What this means is behind the scenes, under the hood, DreamWorks Animation is a digital manufacturer,” Swanborg said. “There’s really only one thing we make at Dreamworks: we make data. Our characters are data. They’re a magical, amazing software code that our artists then get in and create performances out of.”