This S.C. Ports Authority celebrated five years of Inland Port Greer with a big number on Oct. 19. With a crowd of political and business leaders watching, the port crew lifted a cargo container from a rail car for the 446,280th time.

According to Jim Newsome, president and CEO of the ports authority, the number is 62% ahead of projections when the port was opened in 2013. Newsome said the number was higher than he expected then, and he was one of the project’s few optimists in the beginning. 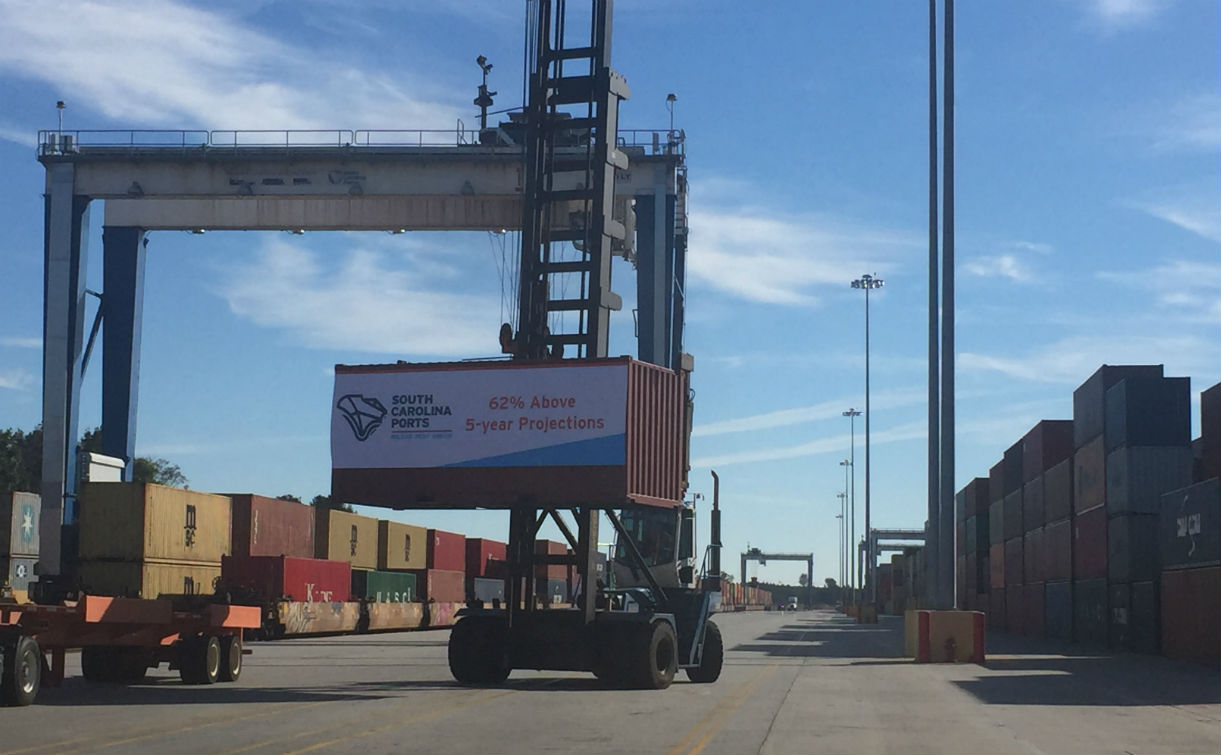 “When I first announced that we were going to build an inland port in Greer, people thought I had lost my mind,” Newsome said. “They said, ‘What river are you going to deepen to get to Greer?’”

He said it didn’t take long to get a lot of the right people on board, however, and the project moved quickly when they did. The idea was proposed in January 2012 and in operation in November 2013, and that was despite 103 days of rain in the interim.

“Inland Port Greer is firing on all cylinders and has been a continued success story since opening in 2013,” Newsome said. “This facility is a critical component of the intermodal container logistics landscape in South Carolina and the Southeast region.”

The ceremonial container was brought to the ground near the celebration, bearing a banner that was signed by attendees, starting with Gov. Henry McMaster.

“In just five years, Inland Port Greer has proven to be a critically important piece of South Carolina’s infrastructure that helps facilitate our growing economy,” McMaster said. “We continue to set records in export sales because companies know that when they invest in South Carolina and decide to do business here, they’re going to get an elite workforce and an unparalleled ports system that can meet every need they may have.”

“Norfolk Southern values the strong partnership we have with the South Carolina Ports Authority, including the South Carolina Inland Port, which has evolved into a strategic transportation hub,” said James A. Squires, Norfolk Southern’s chairman, president and CEO. “Today, this key facility provides a unique and sustainable logistics model that supports economic and business growth throughout the region.”

Inland Port Greer operates 24/7 to serve the supply chain needs of the S.C. Ports Authority’s customers, according to a news release. The facility is positioned along the Interstate 85 corridor and provides market access to more than 94 million consumers within a one-day truck trip.

A key catalyst for the inland port was shipping load caused by BMW Manufacturing.

“The inland port has been a valuable partner for BMW,” Max Metcalf, BMW Manufacturing’s manager for government and community relations, told the crowd. “They have handled over 180,000 containers for us over the past five years and created a much more efficient system for moving containerized product to and from the Port of Charleston.”

Approximately 22% of SCPA’s containers move by rail, and intermodal volume has seen growth of 180% since 2011, according to the news release. With the success of Inland Port Greer, the ports authority opened a second intermodal facility, Inland Port Dillon, in April.