Fleet management software company TireCheck opened the doors of its new Greenville office March 12 with words from Gov. Henry McMaster and a delegation from the Republic of Ireland.

The company’s American location was first established at 508 Rhett St., but with its expansion over the past five years, TireCheck expects to bring 10 new jobs to its new 6,597-square-foot office at Keys Court. Investors in the company include Michelin, Enterprise Ireland and Enterprise Equity Venture Capital according to PitchBook. 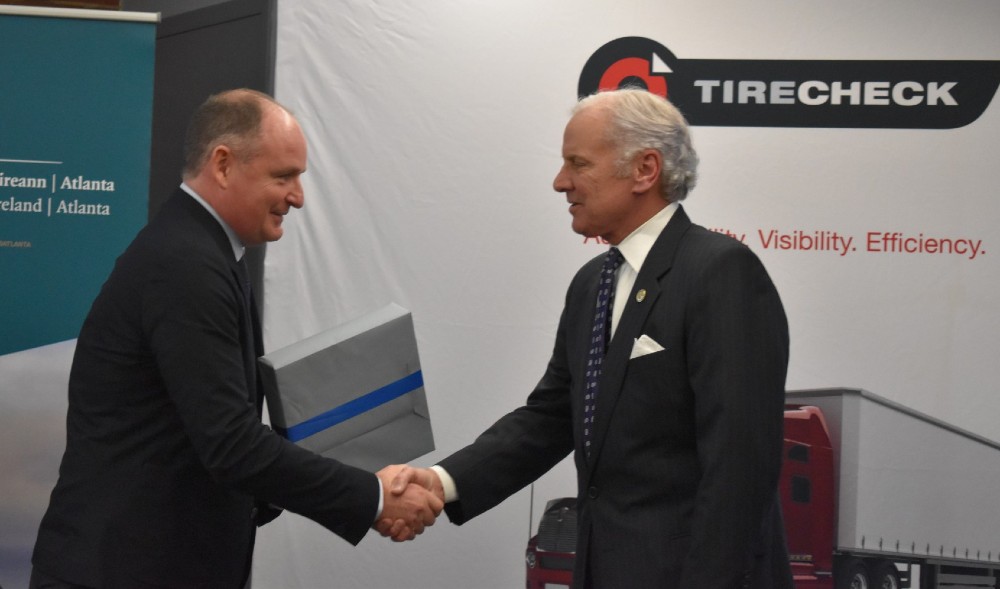 “The new office gives us additional space to grow and hire more people, which is really the key thing. It’s a better facility for the shipping needs we have,” said Jonathan Brennan, commercial director of TireCheck’s Greenville office.

Tire-Check offers management services for industrial fleets and has 150 employees, including 20 at its Greenville location. Brennan had already hired two new employees prior to the office’s opening and expects to add 10 additional customer management specialists to his team over time.

During last week’s office opening, McMaster; Paul Kehoe, Irish Department of Defence’s minister of state; and Shane Stephens, the Irish consul general based in Atlanta, praised the Upstate’s business climate as a North American base for Irish-owned companies.

Stephens said an open technology transfer relationship between the United States and Ireland have helped a number of Irish-owned businesses make the leap and establish U.S. locations across the Southeast.

“What Jonathan Brennan and TireCheck are doing right now is emblematic of a much wider pattern,” Stephens said during the opening. “Today, there are about 2,000 people in South Carolina working for indigenous Irish high-tech companies. That’s CRH Americas, that’s AppleGreen, that’s Mergon and that’s E+I Engineering — who are standing right here. We are very proud of what our companies are doing. In the old days, we sent out Irish people in tough times after the potato famine and earlier and we were welcomed very warmly in South Carolina. I’m glad that today, we are able to give back in very significant ways and I’m delighted that we are partnering with Gov. McMaster, in particular, today.”

McMaster extended his congratulations and promoted South Carolina as a “handshake state” with one of the best business climates in the country.

“We are delighted to be here,” McMaster said. There are about 25 Irish companies here in the state, and this is a great innovative company to have.”

Brennan said Michelin was the primary draw to the Greenville area when TireCheck was scouting a location for its North American office, but TireCheck also saw potential in hiring graduates from schools like Clemson University, Furman University and Greenville Technical College.

“I think there are the short-term economic circumstances that the world finds itself in now, but from a more medium to long-term outlook, Greenville and the Upstate area has offered us reasonable costs for actually setting up the office, very good people who kind of have a southern charm, with the education of the universities that are around here,” Brennan said.