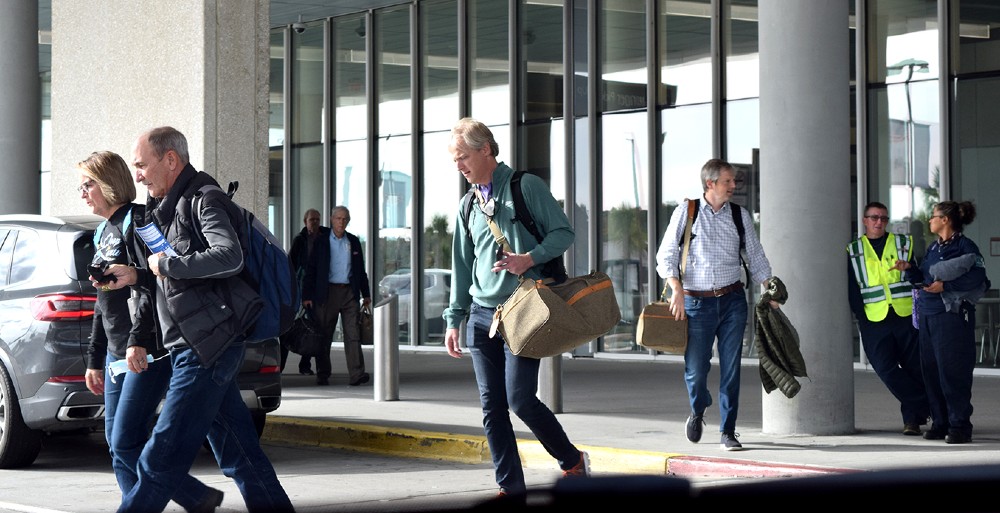 Travelers disappeared from airports in 2020 as the COVID-19 pandemic changed the world. Leisure travelers began a steady return in 2021 but business travelers remained grounded.

Now travel is back at levels sufficient to drive up ticket prices and create long lines while airlines add new routes to more places. Even business travelers are showing signs of getting out there again.

As far as all traffic goes at the Charleston International Airport, recovery in a city synonymous with Southeastern tourism had 706,349 more enplanements and deplanements between January and April than the year before.

That’s 66,116 more passengers than during the same period in 2019 and a recovery reflected throughout the state.

Starting on June 23, Breeze Airways will operate daily nonstop flights from Charleston to Orlando and back. On June 28, the airline will launch a daily direct flight from New York City’s Westchester County airport, while Sun Country Airlines introduced a nonstop flight to Minneapolis-St. Paul International Airport on Thursdays and Sundays in April.

“We are pleased to add Breeze Airways new daily nonstop service to Westchester Airport to our roster of direct flights,” Elliott Summey, Charleston International Airport executive director and CEO, said in a news release. “With tremendous demand to get to the New York area and Connecticut, we believe daily nonstop to White Plains will be a home run for the Charleston region.”

Direct Breeze Airways flights to San Francisco and Las Vegas, as well as flights to Syracuse, N.Y., and Fort Myers, Fla., were also added to Charleston’s lineup of at least 13 additional routes added since the beginning of 2020.

On the up and up

Columbia Metropolitan Airport witnessed an 85.9% year-over-year increase in passenger traffic in February, with close to 90,000 more passengers throughout January to March 2022 than during the same period in 2021, according to the airport.

“We are seeing both personal and the long-awaited business travel return in great volumes — which is welcomed,” Mike Gula, executive director of the airport, said in a statement. “We are not back to pre-pandemic numbers due to the air travel halt COVID-19 brought to airports around the world, but we have far surpassed early projections.”

At the Greenville-Spartanburg International Airport, a location whose mainstay may be more of the business traveler than other state destinations, total traffic has recovered by close to 90% compared to 2019 numbers.

Like CHS, GSP also inaugurated new direct routes and locations throughout the pandemic, including a five-day Contour Airlines flight to Nashville and nonstop service to Orlando, Tampa and Jacksonville, Fla., from Silver Airways.

“Business traffic is coming back and we’re starting to see more throughout the summer,” said Tom Tyra, director of air service development and communications at GSP. “Now we have a lot of summer vacation travelers now that school is out, but we expect in the fall that we’ll see more business travel come back to GSP.”

While the removal of in-air mask mandates made air travel more appealing to some, Tyra thinks that the lack of travel and other restrictions at popular GSP destinations plays more of a role in boosting professional passengers.

“As companies brought people back to the office, then they were ready to go back and talk to customers,” he told SC Biz News.

Skyrocketing gas and corresponding ticket prices won’t keep the summer traveler away, he predicted. The impact of both factors on autumn numbers — again, more reflective of professional traffic — has yet to be seen.

“But we would expect to see a little higher ticket prices than we had,” Tyra said. “Of course, during the pandemic, they were really low because airlines were just hoping to get customers back in the airplane. And now that they’re ready to go, all the airplanes are going to be very full.”

Passenger routes to Europe, many which were constricted during the previous two years, prompting the transformation of Aer Lingus and British Airway jets into cargo planes at GSP, have now returned en force.

But along with escalating prices, airlines and airports have another snag in the system: a shortage of pilots and general staff.

“Many of the airlines saw some of their pilots retire early or move on to other jobs, and so they’re just now coming back and training some of the pilots,” Tyra said. “They may not be flying as many airplanes as they would hope, so that only makes the seats that are out there more scarce. And so when you have high demand, and not much supply, then the price will go up, and people are buying it as quickly as they can.”

On June 17, Transportation Secretary Pete Buttigieg met with airline executives to get an answer for the slew of delays that have mounted during the beginning of peak travel season.

“Air travelers should be able to expect reliable service as demand returns to levels not seen since before the pandemic,” Buttigieg said in a statement.

There may not be an easy answer.

In what pundits have called “Travel Armageddon,” delays mounted in mid-June. U.S. cancellations topped 10,000 for the weekend of June 18-19, with more than 4,200 flights delayed and nearly 900 canceled on Sunday alone, according to FlightAware, which tracks flights in real time.

During the peak of delays and cancellations over the weekend, Denver, Dallas and Atlanta were the epicenter for stalled flights. On June 19, the three airports reported a total of 92 delays and 28 cancellations, according to the site’s “Misery Map.”

On June 17, Tyra said he thought that thunderstorms and air traffic control delays at major cities — common banes for the summer flight — have been creating the largest stir.

“You can have a thunderstorm, let’s say in New York, and it goes right across Philadelphia, Washington, D.C.,” he told SC Biz News. “And then, all of a sudden, all the flights that aren’t even going there but passing by there are impacted. We’re seeing a lot of that.”

Pop-up storms throughout June have only exacerbated the concerns of many travelers who haven’t boarded since 2019, as have strikes among a growing string of airlines in Europe: EasyJet, Ryanair, Brussels Airlines and at the Charles De Gaulle Airport.

And for the business traveler, time is even more of the essence.

Delays at GSP were “low but increasing” and “low but decreasing” at CHS. Like most of the regional airports across the state, CAE was noted as having a “very low” number of delays.