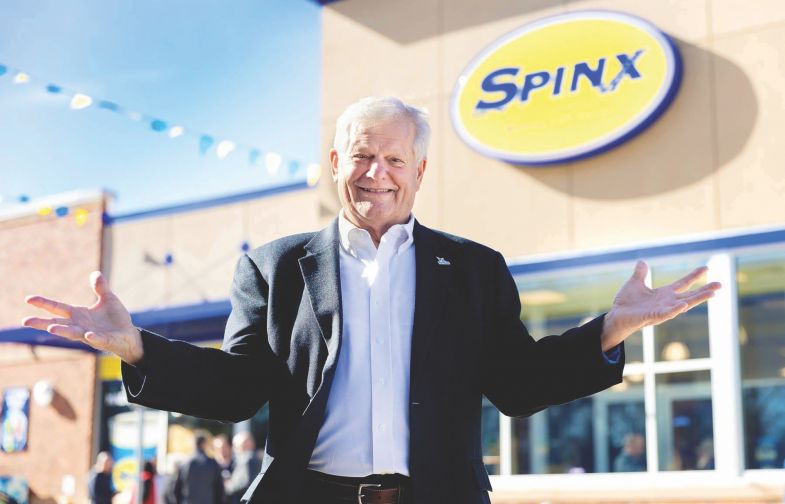 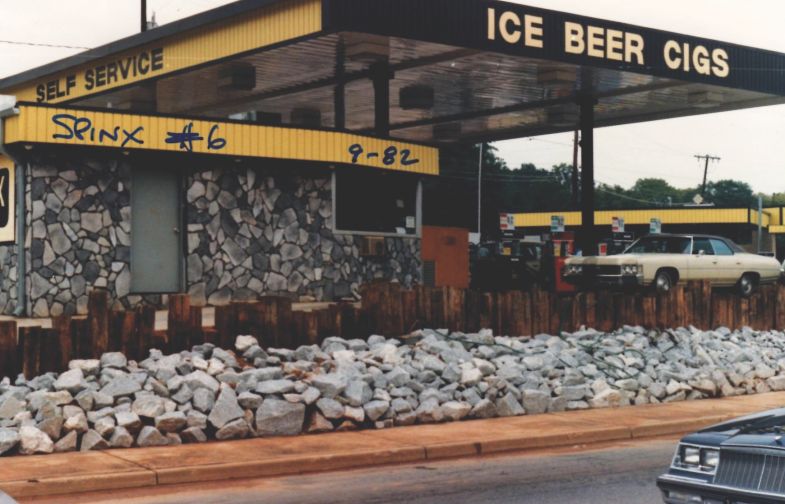 Spinks left his job with Shell to purchase one lagging station from the company. It was the first of 84 Spinx stores established across the state. (Photo/Provided) 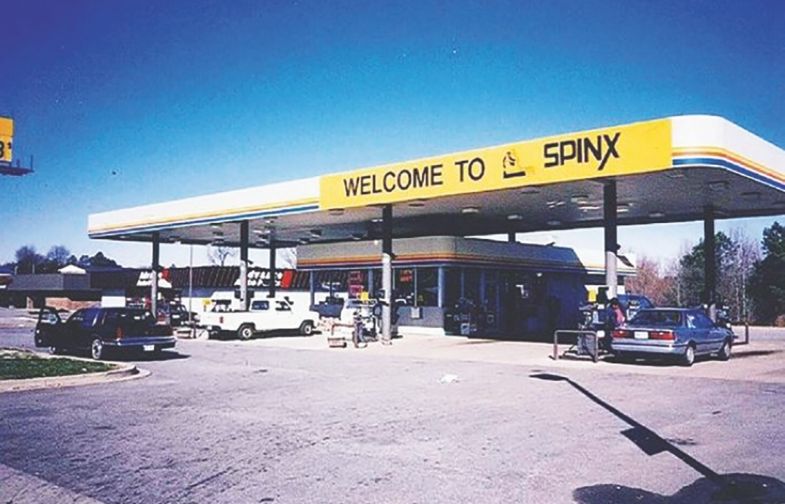 By the early 1980s, the individual stores were not yet fully evolved, but the greater Spinx plan was. (Photo/Provided) 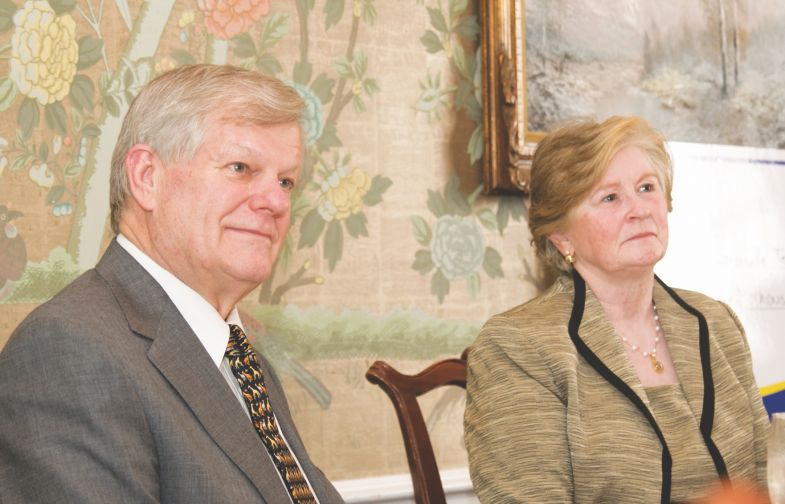 Stewart and Martha Spinks have repaid the community through extensive civic involvement and the Spinks Family Foundation. (Photo/Provided) 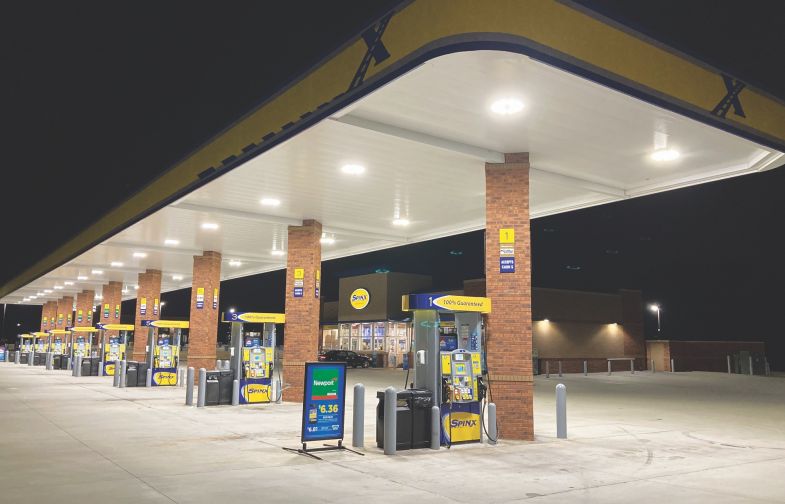 One of the newest Spinx stores in Easley sports a large and bright row of gas pumps that are a far cry from the service stations that were the origin of modern convenience stores. (Photo/Ross Norton) 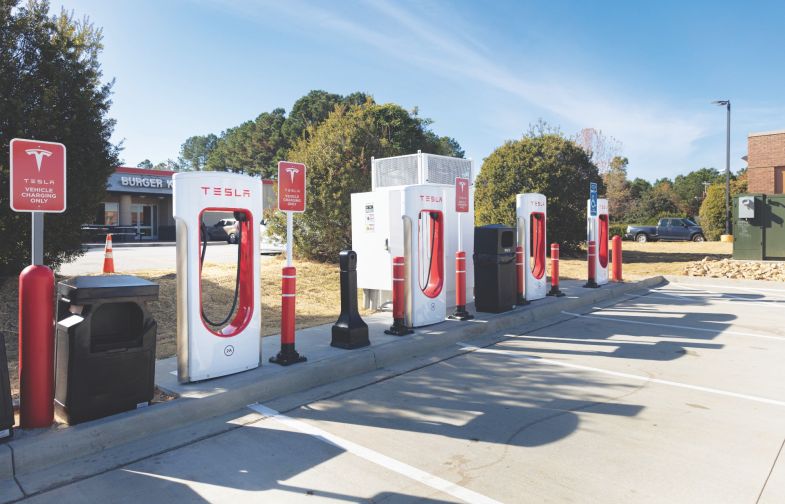 One of the very latest developments is a Tesla charging station at an Orangeburg store. (Photo/Provided)

Maybe it was a visionary moment; maybe it was salesmanship. Maybe it was the bravado of a young man who perhaps did not yet realize he was an entrepreneur.

By saying “I’m his neighbor,” Stewart Spinks had talked his way into the office of Sam Hunt, president of Southern Bank and Trust, and asked for money to buy a business. It was 1972. Spinks told Hunt he needed $44,000, and he needed it in a week. When Hunt asked if he was serious about the quick turnaround, Spinks walked the banker to a window and pointed to his car, where a real estate agent was waiting.

You know that scene, Spinks asks, in Forrest Gump where Forrest shows his war wound to President Johnson? The scene where, through the magic of moviemaking, the real Lyndon B. Johnson, shaking his head and laughing, walks away from the fictional Forrest Gump? That scene?

Spinks lived it nearly 50 years ago in a bank at the corner of Church and E. North Street. Hunt walked away, laughing, shaking his head, amused — amused, but sold.

Spinks got the money and bought his first store, at the corner of E. Washington Street and Laurens Road, where it still dominates the intersection across the street from corporate headquarters.

Something else happened during that conversation with Hunt. The brash young man, the salesman, had already thought of having more than one store — in fact, he was eyeing a Poinsett Highway site for what would be his first ground-up location — but his first notion of a full-blown chain came out of his mouth at the same time it popped into his brain during an eager pitch to secure that loan. He heard himself tell the banker he would one day have 10 stores around town.

Before that could happen, an industry was about to be shaken by change. The survivors — and thrivers — would be those ready to adapt. Service stations would give way to uninviting little stores, often with barred windows and stale sandwiches, which would then give way to today’s model store with fresh food, big windows and welcoming façades where restrooms are there for anyone, not just those paying customers with enough nerve to ask for a burdensome key.

In the board room of his corporate office, where flip charts show brainstorming ideas on the company’s future, it’s clear Spinks, now chairman of the board, does not intend to stop evolving. The Spinx Co. is celebrating it’s 50th year in business, marking the end of its fifth decade on Dec. 1. 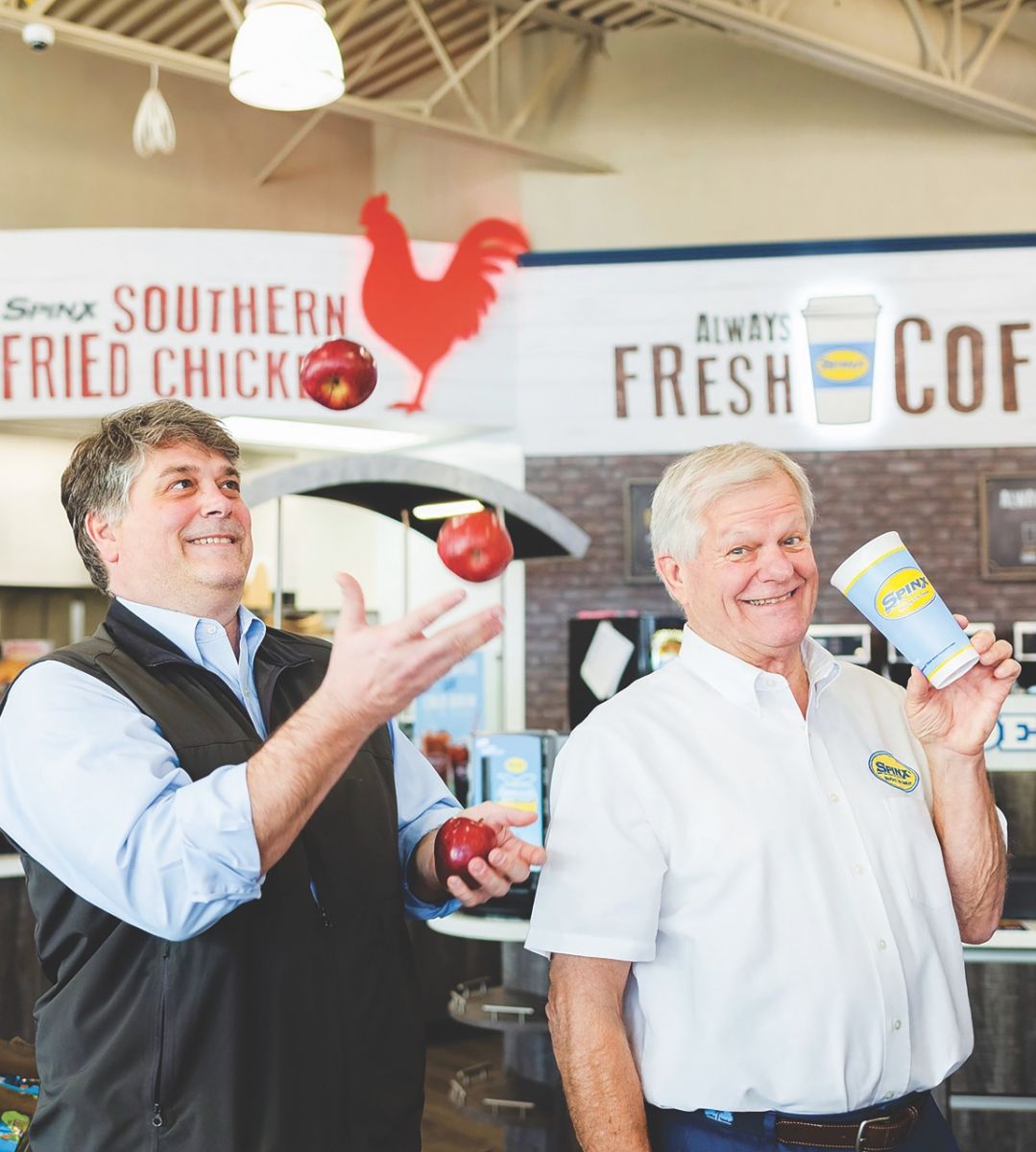 In the beginning, Spinks wasn’t so much a visionary as he was a guy with a pretty good purview. He secured a job with Shell Oil Co. right out of college. He was offered jobs with some of the business giants, but was attracted to a job calling on Shell service stations because, as the son of a blue collar man, he was comfortable with the work they did.

“How did we sell gasoline in 1969? Service stations, right? Who ran the service stations? Mechanics that could do a brake job, that could do repair work, could sell tires, sell a battery,” he said. “So I felt really comfortable calling on those people because I knew what a 9/16ths box end wrench was.”

With a University of Tennessee degree in marketing research and advertising, he also knew something about consumer behavior.

“So I ended up with Shell, training in Atlanta in a very vibrant market at the peak of oil and the way it was sold through service stations,” Spinks said. “(Interstate) 285 opened in the summer of ’69. … What that meant was it was like a blind dog in a meat house, you know. We were grabbing at every piece of real estate we could find. It was fun. I was working with a real estate guy as part of my program down there learning how to choose real estate and then from there phased into helping small business owners like service station dealers be successful. … So it gave me a crash course in how to run a small business.”

In other parts of Shell Oil, especially the exploration and production division, company experts knew a change was coming, but it was not information shared with marketing, Spinks said. Politics and price controls from the American government and the rise of OPEC — the Organization of the Petroleum Exporting Countries — led to tension at the pumps and frustrated consumers. Gas went from 29 cents a gallon to $1.29 in a short time, and long lines formed as customers hoped they could buy gas before it ran out.

Oil companies started getting out of the retail side of the system and shuttering stores. And Spinks have a view from there. He didn’t really know what was happening from his place in the marketing section, but he could tell something was wrong: chances for advancement had stagnated and he no longer saw other jobs in the company that appealed to him.

“All that stuff up the corporate chart became less and less customer centric and more and more administrative. And administrative, as you can see, is not my forte,” Spinks said, waving his hands at stacks of documents. “I decided to leave Shell, take that service station because I knew how profitable it was. I could rent it for $200 a month. I knew they wanted to sell it; it was on the disposable list.”

As service stations were dumped by oil companies, opportunities were created for whoever wanted to take on the real estate.

Stewart, who also had bought a heating oil company and started a service removing disused gas tanks, took the plunge with the help of Sam Hunt and the Southern Bank and Trust loan. And he did it without telling his family.

“Forty-four thousand dollars I paid for that,” Spinks said, indicating his first store at the end of E. Washington Street. “That was like probably $450,000 today. It was very risky. That’s why I couldn’t confess to (my wife) Martha that I’d left Shell until the check cleared.”

The location was a stinker for Shell, but for the previous operator who decided to close it, the store was successful. Spinks felt he could support his family with that one store if nothing else went well.

But most everything else went well. Now there are 84 Spinx stores across the state, and the Spinx Co. is the largest privately held retailer headquartered in South Carolina with 1,588 employees. At many Spinx stores, car washes and quick service restaurants make the sites essentially three businesses in one. The Spinx Co. was a franchisee for in-store Burger Kings, Arby’s and Subways, and learned a lot from them — enough to elevate its fried chicken and biscuits to an emerging recognized brand offered through its own in-store restaurants. 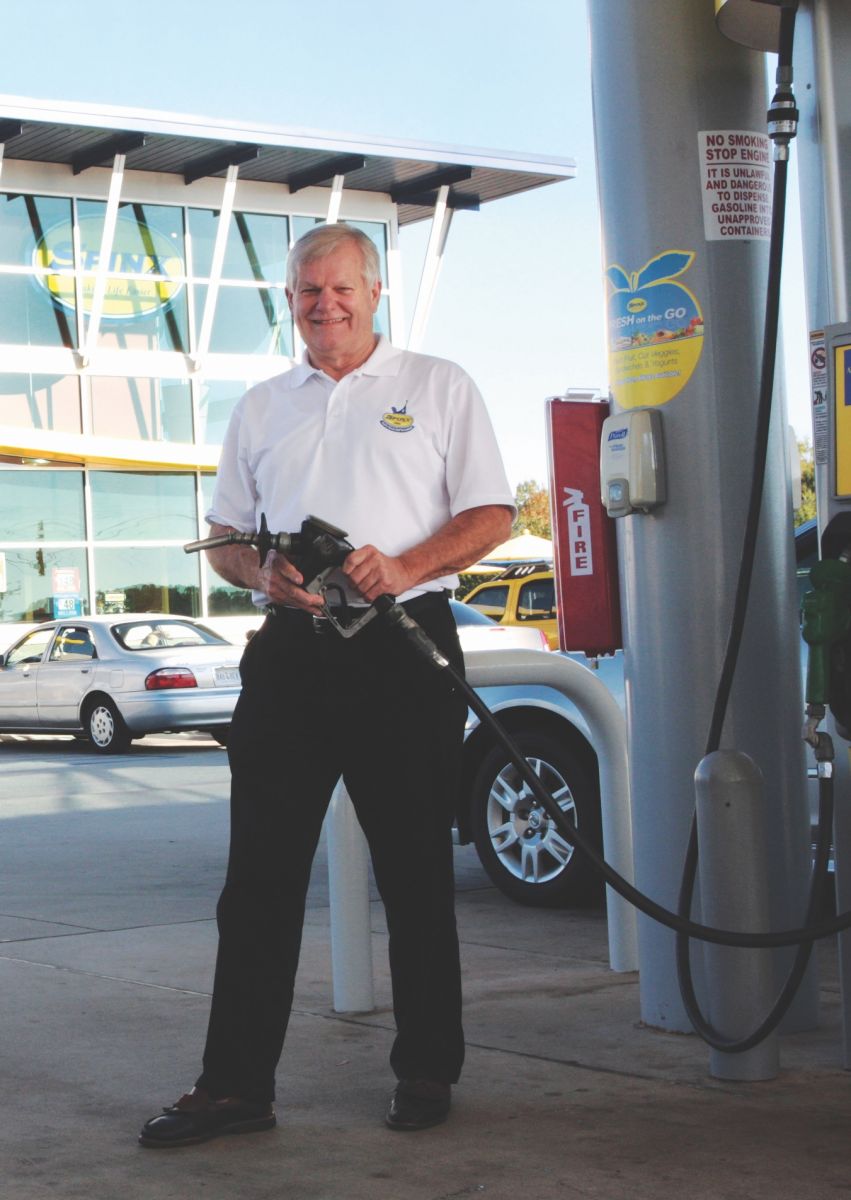 Changes kept coming as the years went on, and customer expectations changed as stores moved from non-descript to soaring glass and brick. Sites that once were primarily service stations are now retail stores that sell gas, too. Stewart said about 72% of sales companywide come from inside with 28% coming from petroleum sales.

“As an industry we are resilient. ‘Resilient’ is a key word for us if you think about it,” Stewart said. “Look at the SKUs; it’s a very broad offering but it’s a convenient offering.”

“We are very, very adapted. We are able to adapt ourselves to lots of changes,” he said. “Think about it: 20 years ago, the demise of tobacco … it was going to kill us. Thirty percent of our sales would go away. But (the end of tobacco) hasn’t happened as quickly as predicted, but the volume wheel has shrunk and the margin has gone up so gross profit has been about the same.”

The company, and industry as a whole, also remained agile through changes brought by the pandemic. Demand for some of their products went down so they offered more of what people needed, such as toilet paper.

“Volume for gas went down 50% but inside sales shot up,” Spinks said. “The team reacted to what they felt like was going to be needed. We also became much more favored as a channel for food. Even though the consumer was afraid to buy food outside of their own house for a while. The QSRs had a heck of a time; they had to shut down but we didn’t have to shut down.  Food sales dropped off inside but other sales went up.”

Spinks’ son Steve took over as CEO in 2008 and the founder today remains engaged but trusts his leadership team to guide the company.

“It’s rewarding to know these people will take a risk,” he said. “Over the years I probably lost so many good people because I wouldn’t listen. I was afraid. I was afraid I couldn’t make a mistake. If I had made a mistake on that store when I got Sam Hunt to finance it, I wouldn’t be here today.”

Spinks thinks the country has been plagued by a decline in the entrepreneurial spirit, but he is encouraged by signs of a comeback, much of it from the immigrants he calls “new Americans.” His advice to anyone considering that plunge is to think about the timing.

“That’s a staging thing. The first stage is just having the nerve to leave the comfort of a corporate job with many benefits,” he said. “Sometimes you just have to pick that moment in time as an entrepreneur. I think some of it was there from the beginning for me, and some of the decisions I made might have been intuitive, but intuition comes from a lot of information coming in from a lot of places and is finally synchronized and you think, ‘This is the time.’”

“Don’t lose the hope,” is Spinks’ advice to entrepreneurs in the first stage. “Don’t lose the belief that you can deliver as well if not better than someone you either work for, like I did, or that void you see in the marketplace.”