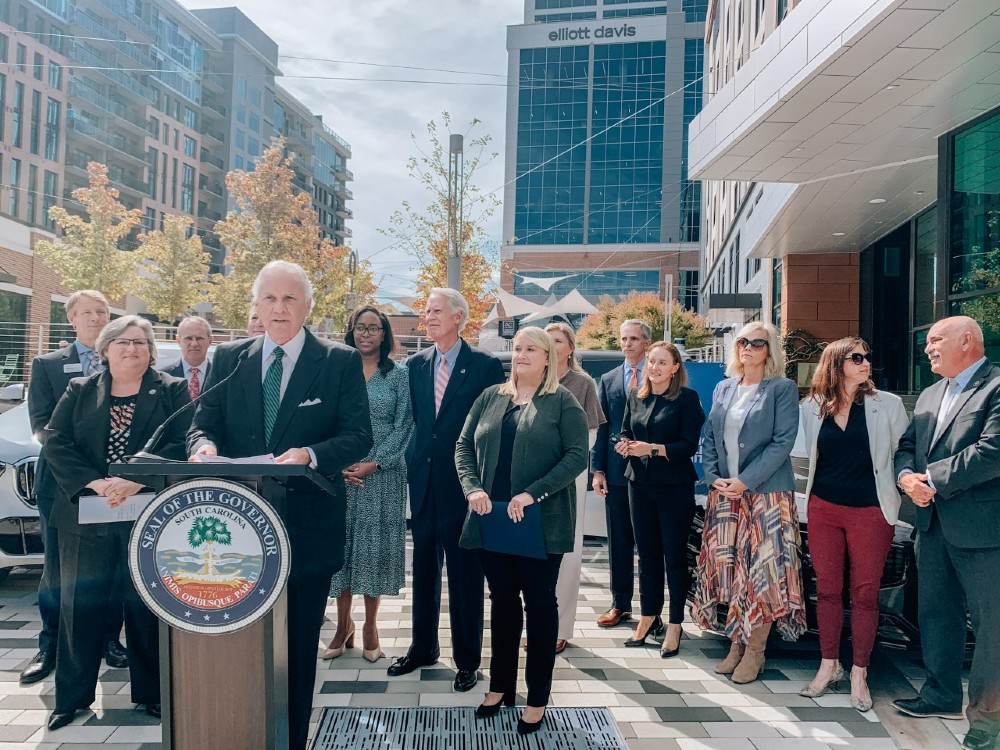 S.C. Gov. Henry McMaster signed and announced a new executive order that will help support the increase of electric vehicle production and coordinate infrastructure for the industry in the state.

The executive order, which was announced at the end of the Electric Vehicle Summit at the AC Hotel Greenville on Thursday, formalizes McMaster’s efforts to coordinate the future roll-out of the state’s electric vehicle infrastructure. The order prioritizes the state’s efforts to recruit vehicle-related businesses to South Carolina by training the state’s workforce to be prepared for the jobs related to the industry and establishing a “one-stop shop” at the S.C. Department of Commerce for businesses interested in investing in the state, according to the news release sent by the governor’s office on Thursday afternoon.

“Thousands of jobs will be created,” said S.C. Department of Employment and Workforce Director Dan Ellzey at the summit. “We are ready from a workforce standpoint, but this electric vehicle trend will be a huge demand for technicians at car dealers who will need additional training for battery-operated vehicles. We will continue to gather occupational information and analysis to figure out all the needs.”

Ellzey also predicted a need for industrial engineers, which require a college degree, and software developers among many other positions.

“Not only does the number of students need to expand, but we will also need more instructors,” he added.

The S.C. Technical College System secured $12 million last year in state funding to train 6,000 people, Hardee said. He believes the interest in the manufacturing industry should be sparked earlier, in K-12 schools.

“We will continue to navigate to address this emerging industry,” said Hardee, “much like when Michelin came to South Carolina.”

Manufacturing jobs make up more than 30% of the state’s total workforce. South Carolina is currently home to more than 500 automotive companies and 72,000 autoworkers. The industry has a $27 billion economic impact in the state.

The governor’s executive order also creates an Interagency Working Group tasked with working collaboratively with stakeholders and local governments to develop a comprehensive plan regarding the strategic deployment of electric vehicle-related resources and infrastructure across the state, according to the release. The working group will be focused primarily on developing a plan for strategically placing electric vehicle charging stations along South Carolina’s interstates and roadways.

The working group is made up of many of the agencies who provided guest speakers at the summit including the department of Transportation, commerce, DEW and others.

“The only way South Carolina has been able to maintain its status as an automotive industry leader for nearly three decades is by strategically adapting as the industry innovates,” McMaster said. “As the industry continues to move toward electric vehicles, South Carolina will move along with it — working to ensure that our state will continue to be seen as the ideal place for manufacturers and suppliers to do business. Along with these investments comes good-paying jobs that our people will be ready to take on.”

For more information on the executive order, see it here (pdf).

South Carolina’s automotive manufacturing industry has been a principal driver for the state’s economic growth since 2010, with a total growth rate of approximately 186.1% between 2010 and 2020 — higher than any other Southeastern state. In order to continue long-term growth, the state intends to respond to changes in demand and market transitions.

“This has been consistent growth over time, over the last decade,” said Von Nessen. “More and more companies are drawn to South Carolina than anywhere else in the United States for manufacturing.”

The e-Mobility industry is rapidly evolving with the rise in global demand for electric vehicles, he said.

According to Von Nessen, even with the extraordinary growth the automotive industry has seen in the previous decade, South Carolina’s automotive industry currently contributes just 26% of the total value to the vehicles it produces. That is due to the state historically not producing vehicle engines.

“Now we are in a position where we can start thinking about the production of vehicle engines in the state,” he said. “This is a real opportunity for the state, not only to adapt to the new electric vehicle landscape but to create an increase of value of the state.”

Keynote speaker J.B. Straubel said the landscape has changed incredibly fast over the last decade. He is co-founder and former chief technology officer of Tesla and founder and CEO of Redwood Materials, a domestic supply chain for lithium-ion batteries across collection, refurbishment, recycling, refining and remanufacturing of sustainable battery materials. Redwood Materials partners with Ford, Volvo, Toyota, Volkswagen and other companies, focusing on a clean energy future. Straubel left Tesla and started Redwood in 2017.

“We are only 1% of the way of electrifying cars in the U.S.,” Straubel said. “It’ll be a challenging time, but we are already experiencing unprecedented growth in this industry.”

However, he added, globally the Southeast is going to be one of the largest battery manufacturing centers.

Also at the summit, several government agencies and state organizations took the stage in Q&A-style interviews including representatives from the S.C. Department of Commerce, S.C. Department of Transportation, S.C. Technical College System and the S.C. Manufacturers Alliance.

Key takeaways from the summit

* More electric vehicle production from S.C. manufacturing plants could lead to a greater reliance on out-of-state suppliers, which could, in turn, result in lower rates of job creation, unless the state grows its e-Mobility supply chain.

* Global projection of electric vehicles is increasing dramatically and is forecast to continue in the coming decade.

* A focus on growing electric vehicle supply chains, freight transportation, maintenance and workforce initiatives are all critical to help maintain the competitive advantages that the state has experienced throughout the last decade.

Greenville Mayor Knox White said, “We are a manufacturing state, an intersection between innovation and new technology, and electric vehicles are the future.”

McMaster said manufacturing is booming in the state. The industry has created billions of dollars in capital and thousands of jobs in South Carolina. For example, BMW has invested more than $12 billion into the state since breaking ground on its Spartanburg County plant in 1992.

Volvo has also projected the company will make all its vehicles electric by 2030, according to McMaster.

“Times are changing, and we are right in the middle of it,” he said. “It’s a great future.”

“This is an opportunity to be a leader in the industry across the nation,” he said.

If everyone in the country woke up and decided they wanted an electric vehicle, said S.C. Commerce Secretary Harry Lightsey, it would still take decades to get the United States to where it needs to be for the future.

“It’s a real issue with battery limitations,” she added. “But we are looking at interstates and more rural areas, and we anticipate leveraging public and private sectors at maximum capacity, especially federal funding to help implement the NEVI plan.”

The state is already seeing an increase in electric car production.

An electric car company, Dash EV, which produces vehicles to expand the carsharing business, announced on Oct. 12 it will expand its operations and move headquarters to Greenville.

Dash EV created “Dash,” a 100% electric, solar-charged vehicle. The company’s mission is to provide sustainable mobility that fills a gap between walking, biking and mass transit in cities and on campuses.

In September, the S.C. Energy Office released the Electric Vehicle Stakeholder Initiative Report, which summarizes opportunities to advance electric vehicle deployment in South Carolina. The report features the collaborative work of more than 350 diverse stakeholders to examine the legislative and regulatory landscape for electric vehicle access and adoption, identify challenges and opportunities, and develop actionable recommendations for South Carolina. The summary of the report (pdf) was shared at the summit.

“It is time to embrace the future for more sustainability to continue to be competitive as a state,” said Commerce Deputy Secretary Ashely Teasdel. “In the automotive force, we have here some of the best in the world, so we have a responsibility to help support our companies and businesses.”

“We make it our business to be pro-business here, which is why we have a strong ecosystem in the state to support new businesses,” she added. “Manufacturing businesses love doing business here because they are thriving. I believe we will see more renewable energy sources here over the next decade.”