Graham: Electrification of automobile is too big for any 1 company

Amid the exuberance during BMW’s recent announcement of $1.7 billion investment in two Upstate projects, it was Sen. Lindsey Graham who, though full of praise for the automaker, said BMW can’t do it alone.

Electrification of the U.S. automobile fleet is an undertaking too big for one company and too big even for the business sector alone, he said. 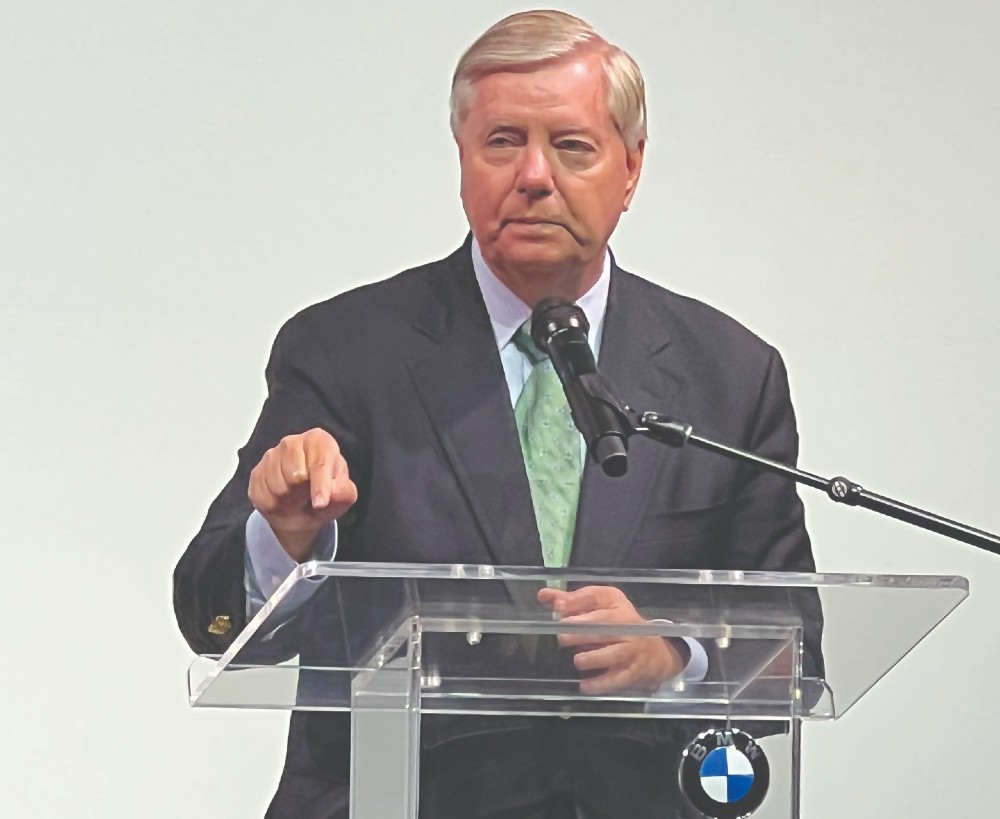 “That vision that was announced here today will only become reality if we earn it, if we embrace the future, if we realize that we can’t get there by ourselves,” Graham said as one of the speakers at BMW’s announcement last month, which was hosted by BMW Group Chairman Oliver Zipse from Munich. “That government and business must be partners. You can’t do this, Mr. Chairman, without the help of state and local and federal officials so here’s the one thing I want to pledge to you and all your associates: South Carolina will be there for BMW as you transform your company. What you’ve got (in government support) over the last 30 years, you will get for the next 300 years.”

Graham called BMW’s plans to invest $1 billion in an expansion of the Greer plant and another $700 million in a new battery plant in Woodruff one of the “most consequential announcements in the history of South Carolina, not just because of the money but because when they write the (book) on the electrification of the vehicle in the United States, South Carolina will be in the first chapter.”

He said the plans put the political leaders on the local, state and federal level on the ground floor of the biggest change in industrial policy in modern times, comparing it to the shift from the horse and buggy to the car. The Republican pointed out that it is business, not the government, that has made the move to electric vehicles real even as it saves a place for gas and diesel-powered engines.

“BMW is going to lead the world, not just South Carolina, in the electrification of the vehicles with the understanding that choice will still be important,” Graham said.

Because of what it takes to make electricity and an electric battery, the senator said the role of government has to be large.

“I don’t know who is going to be budget chairman, but if I’m the budget chairman we’re going to have a hearing about what does it mean for America for a car company like BMW to go down the electric vehicle road,” Graham said. “Where do the battery parts come from? Where do the raw materials come from. Here’s the truth; we’ll never be able to make the battery in America without having materials from outside the country. So with these partnerships, batteries become the new oil. How do you charge the car? In the $1.2 trillion infrastructure bill, which I voted for, there’s a lot of money to accelerate charging stations. How do you build a battery that goes longer and farther? Where do you get the materials? How do you turn raw material into an actual battery that goes into the car? What happens to the oil industry 40 years from now?”

The role of power companies and fueling stations will change, Graham said.

“The change that’s about to come from an electrified fleet means the power companies are going to have to change their way of doing business. What do you plug the car into? How do you double generation and make it lower carbon? One thing leads to the next thing,” Graham said. “We’re looking at small modular reactors to be developed in South Carolina to provide clean energy, a non-emitting source of energy in the nuclear arena. If we don’t have an all-of-the-above approach when it comes to power production, you cannot get there from here. Fossil fuels will be with us for many decades to come and we need to find as much as we can so we don’t depend on people over there who don’t really like us. So we’ve got to do many things at the same time. We need a plan to make it work.”

Graham promised Zipse that he and state elected leaders would be BMW’s partners in the journey to an electric vehicle fleet of American cars. He said the state would become the Detroit of vehicle batteries.