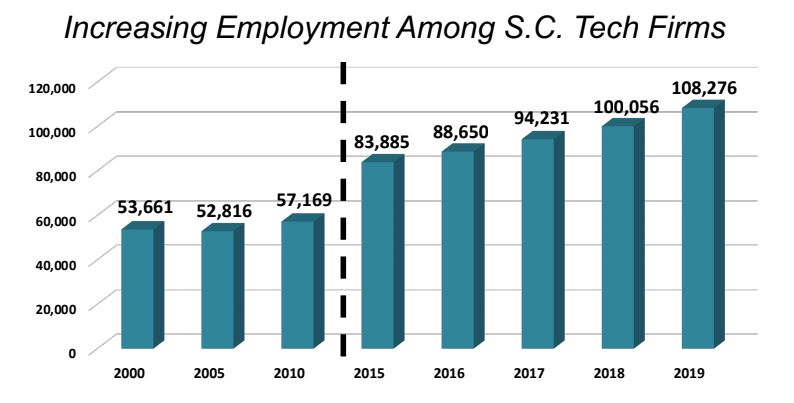 Since 2005, the size of South Carolina’s tech industry has doubled, leaving an economic footprint of $89 billion, according to the SC Council on Competitiveness’ first SC Tech Economic Impact Study.

The study, conducted by University of South Carolina Research Scientist Joey Von Nessen, delved into the sector’s top occupations and employment growth numbers across the state was released in conjunction with a heat map identifying tech firms across the state.

“This is the first time that we’re able to take the broader tech trends that we see on a national level and a regional level and connect them back to what’s happening in South Carolina in individual companies,” Von Nessen said, adding that the study asks: “Who are the companies that are involved in establishing these trends and changing these trends – that boots-on-the-ground approach.”

Telecommunications, computer and electronic product manufacturing, and other information service industries host the largest concentrations of the state’s tech positions, but the leisure and hospitality, transport, finishing, and health care sectors have also experienced a greater than 100% increase in reliance on tech firms since 2010. 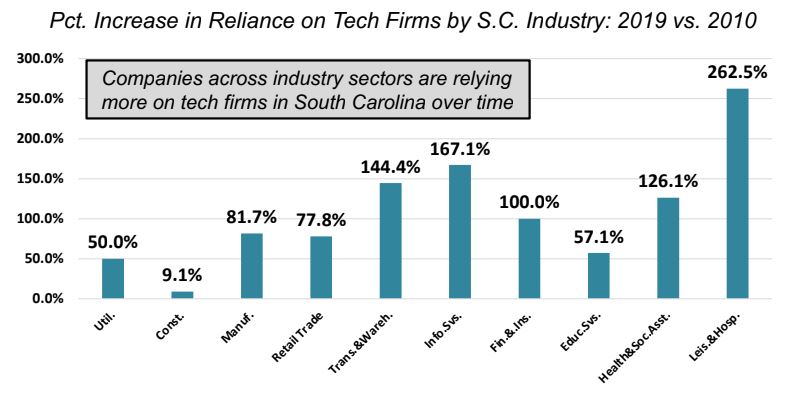 “We see tech being very much enmeshed in most industry sectors, and it is increasingly so,” Von Nessen said. “We have seen those changes over the past decade, and we see how it permeates many of the high-growing sectors in South Carolina and will likely continue to do so again in the next decade.”

The sector generates about $14.3 billion in terms of labor income across the state, with an average individual salary of $78,977, or about 75% higher than the state’s average for all professions, according to Kim Christ, director of the council’s newest initiative, SC Tech.

“It’s remarkable to see the numbers … and how much South Carolina’s major industries have grown in their reliance on tech, the soaring numbers of tech firms since the year 2000,” she said. “It’s pretty staggering.”

As indicated by a 254% spike in Palmetto State tech firms since 2000, employment in the sector only continues to mushroom. Charleston exhibits the highest annual growth in employment at 15.5%, followed by the Aiken/Augusta area at 14.9% and the Grand Strand at 10.1%. Almost 44.1% of all tech firms are located in the Lowcountry, with 22.1% in the Midlands.

“Charleston stands out overwhelmingly as number one, especially when you take out the Aiken/Augusta region,” Von Nessen said in presenting regional employment growth numbers during a virtual press conference Tuesday. “They’ve seen some strong employment growth too, but they’re coming from a much lower base in terms of sheer number.” 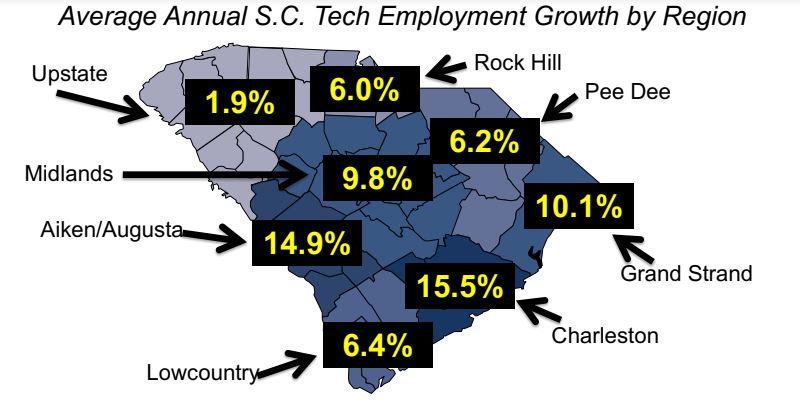 While the Upstate serves as a haven for 33.8% of the state’s tech firms, employment in the region has only grown by 1.9%. Rock Hill experienced more activity at 6.0%.

CompTIA and other national sector-level reference tools also offer data at the state level, but SC Tech’s study stands alone in its regional breakdown of industry growth and its list of occupations and firms that fall into the tech category, according to today’s news release from the competitiveness council.

“We are in the midst of a building boom in SC Tech and South Carolina’s economic potential. Big things are happening here and we are just getting started,” Susie Shannon, president and CEO of the Council on Competitiveness, said in the release. “This study will serve as a kick-starter to work with our private-public sector to build a statewide strategic plan that supports the technology cluster and allow more companies to see the benefits of doing business in South Carolina.”