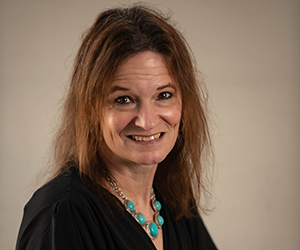 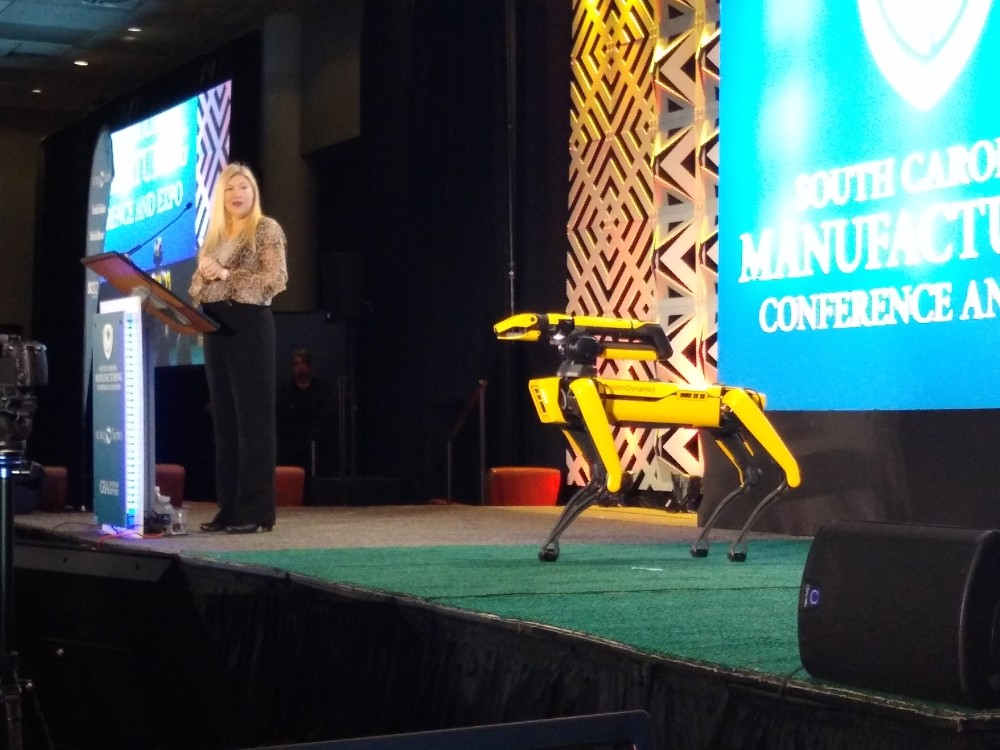 That was the phrase of the moment Nov. 3 at the S.C. Manufacturing Conference and Expo in Greenville as attendees got to witness the dance moves of a bright yellow robotic dog named Spot who will soon be the face of artificial intelligence for thousands of students around the state.

Spot is part of a new approach to attracting young people to the tech workforce from SC Tech, an initiative of the South Carolina Council on Competitiveness designed to promote information technology and other tech jobs around the state.

The Council sponsored “Artificial Intelligence is a Game Changer,” a lunch event where people got to meet Spot and hear about efforts to get young people interested in learning the cutting-edge technology skills that will be needed by future workers in manufacturing and other industries.

“We’re working hard to get an AI curriculum into all of our schools, and this is going to be a big part of it,” said Kim Christ, director of SC Tech. “South Carolina is the first state that has procured Spot for use as part of an AI curriculum, and we hope this will be a pathway to get more students interested in the technology.”

Spot robots were introduced in 2019 by Boston Dynamics and about 400 are currently in use around the country in a variety of industries from manufacturing to mining. One of the robot canines even explored the volcanic ruins in Pompeii earlier this year, according to a report in Smithsonian Magazine. The robot is useful in situations that could be unsafe or difficult for human workers.

Spot won’t be facing any danger in South Carolina, however. Instead, the robot, which weighs more than 100 pounds, will be visiting school districts around the state beginning next year. Students will learn tech skills that enable them to work with Spot and in the process build an artificial intelligence curriculum centered around the robot.

While Spot might be a hard worker, the dog also has rhythm.

Techno music blared from nearby speakers at the conference and attendees got to see Spot “dance” to the music, following a series of moves programmed by a worker with a nearby laptop. The dog performed a series of gyrations and bends, extended its “neck” to look out over the audience, and even jumped into the air a few times.

Christ said once the robot dog is in the classroom, students will be able to learn how to write programs that will enable them to choreograph entire dances for it.

The name Spot is also not going to stick around long. To kick off the program, SC Tech is going to sponsor a naming contest for the dog at the beginning of the next school year.

Keynote speaker John McElligott told attendees this type of innovative approach to teaching AI technology is more crucial than ever because too many students lack skills to work with technology that is already being used on today’s factory floors and in other industries.

McElligott is founder and CEO of York Exponential, a Pennsylvania-based collaborative robotics and artificial intelligence company. He has been in South Carolina recently working with the Lakelands Emerging Technology Council in Greenwood.

He talks to middle- and high-school students frequently and said one of the most disturbing trends he encounters is a tendency for teenagers as young as 15 to not be open to learning the full spectrum of skills needed for emerging technologies like artificial intelligence.

“Studies show that in the near future, about one-third of the population is going to be unemployable because education and business can’t keep up with the way technology is evolving,” McElligott said. “We have teenagers today that have been told by their parents they were geniuses because they could work a tablet. They’re not. They’ve been told they’re tech-savvy and they’re not. They need to be learning skills to deal with future technology. One of the most important things we can do is make sure people don’t get left behind by it.”

In Greenwood, McElligott recently worked with students to help them use technology to create artwork that was displayed in the area’s first AI high school art contest. He said the key is to not only help students learn the tech skills they need to compete in manufacturing and other industries but also to spark a desire to use technology to enhance human life.

“I’m telling students that in the recent past, Google and Facebook got it wrong with how they used technology because they treated people like data points,” he said. “I want them to be able to use their tech skills to make a difference.”