Underfunded Greenlink not keeping up with economic growth

As the central city in a region of growth, Greenville is coming down with Atlanta-like symptoms.

One of them is a sort of interconnectedness that causes, among other things, more people to travel for work from one town to another, or one county to another.

No one seems to think the city’s public transit system, Greenlink, will be a magic solution — not for congestion and not for workforce mobility. But a lot of people think it has a key role to play in both. It’s a system everyone wants but no one has been willing to pay the price to enhance it – and certainly not the price to be out ahead of community growth, according to Jason Zacher, senior vice president for business advocacy for the Greenville Chamber.

The Greenville Chamber has made better funding for Greenlink its top local legislative priority. Those priorities were decided after polling business leaders and a series of meetings and talks. To them, a better system makes sense for everyone, not just bus passengers. 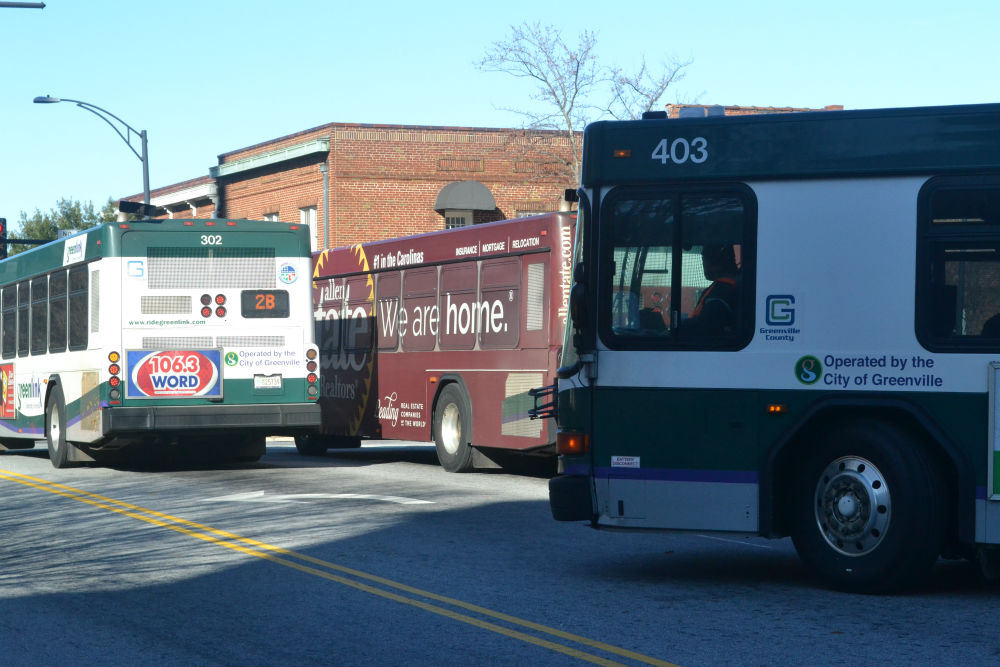 “Expanding Greenlink is a critical business recruitment and retention issue,” Zacher said. “Mass transit is not a social service. It is critical infrastructure and should be treated as such. Greenlink is drastically underfunded compared to our peer communities across the Southeast. In a metro area our size, it is essential that we are able to move residents to work, education and healthcare.”

One challenge for Greenlink is doing a better job moving people along 11 routes with the 19 buses they have. Another is expanding and adding routes and even linking to transit systems in neighboring communities.

Nicole McAden, marketing and public affairs manager for Greenlink, said the system has plans for both, but can’t do either without more money, especially the latter challenge of expanding or adding routes.

According to data compiled by Piedmont Health Foundation, Greenlink is not even close in funding to systems in some peer cities identified for similar size, and singled out by the Greenville Chamber because they compete with Greenville for some workers. On a per capita basis, Greenlink gets $3.80 in public funding. The second-lowest city on the list was Nashville, at $27.69, and Chattanooga, Tenn., beats that by $3.50 with $31.19 in per capita funding. Columbia was the highest of the group, at $56.05.

Zacher said those numbers fluctuate some years because some of the cities may have special short-term initiatives underway, but even when the numbers move up or down, Greenville is last among them by a large margin.

“The difference between us and those peer cities is we don’t have a dedicated revenue source,” McAden said. “Everybody knows that eventually we’re going to have to restructure our revenue source.”

She said the chief complaint from riders is that it takes too long to get somewhere. The routes are an hour long — 30 minutes out and back — and riders say if they miss a bus, they have to wait an hour for the next one and then they’re late for work. Someone riding from the far end of most routes to the far end of another would spend about 30 minutes getting downtown to transfer buses, then another 30 minutes to the far end of the next route. That’s if nothing causes a delay, such as heavy traffic or a wreck.

With the resources they have, the only way Greenlink can shorten the time is to cut the routes in half, McAden said, and no one wants that, or add a bus and driver, which is not in the budget. The long-term plan at present is to add 19 routes, staring in 2024, but even with the proper funding, she said it could take years to ramp up.

In the short term, McAden said one thing that can be done is to extend the hours and they’re working on a plan that could see the buses operating later. Hours currently are 5:30 a.m. to 7:30 p.m. weekdays and 8:30 a.m. to 6:30 p.m. Saturdays, with no service on Sunday or certain holidays.

Greenville Mayor Knox White called the transit system “a major priority” for the Greenville City Council, which recently approved new funding for the Greenville Transit Authority of $1.4 million to provide a local match for $11 million in federal grants and an additional $1 million for capital investments, which includes two more locally manufactured Proterra buses and some overhaul of the existing fleet.

White said he hopes the county will step up its contribution.

“We (the city) actually operate the bus system but are dependent on county contribution for the county wide system,” he said. The Greenville Transit Authority board is made up of city, county and state appointees.

“We support more money for enhanced services but that’s dependent on county doing its part,” White wrote in an email. “Extending bus operation hours and making routes more frequent is the wish of the board.” White said he hopes the county will approve a sales tax referendum for the ballot in 2020.

Every dollar invested in Greenlink returns $3.64 to the community, and that return includes higher wages and more jobs, according to the Greenville Chamber policy agenda.

County Council Chairman Butch Kirven said Greenlink is a priority for the county, but he also indicated getting the public to approve a tax increase is a difficult challenge to overcome.

“Public transportation is a priority, and it is essential for a diverse urban community as a key component of economic development, employment and quality of life,” he said in an email. “Competition for public dollars is intense. Choices are many and hard.”

The county council may choose to increase funding for Greenlink in its next budget, which will be adopted this summer, but the amount needed according to the transit authority’s own studies would require a significant tax increase, Kirven said.

“Funding for public transit in comparable cities invariably includes local revenue derived from sources other than property taxes, such as sales taxes,” his email said. “Those sources are not available to Greenville County. Greenville County citizens are tax averse.”

Dean Hybl, executive director of Ten at the Top, said more support from the public and its elected officials is overdue.

“Greenlink has been dealing with inadequate funding based on their service area and need for many years, so it is key for everyone in the community to help support their efforts for increased funding, especially recurring support,” he said.

Stephen Stansbery, an engineering consultant from Kimley-Horn, said no one really knows what the appropriate amount of funding for a public transit system is, but it’s important to develop and fund strategic plans anyway. He has worked with Ten at the Top’s Connecting Our Future initiative, which is an effort to create a regional vision for transportation and mobility in the Upstate.

Like Atlanta and Charlotte in the past, Greenville is in some ways a victim of its own success, Stansbery said. That success leads to congestion downtown and also, as the cost of living in town rises, it pushes some members of the community farther out where living is cheaper but transportation becomes costlier, for individuals as well as transit systems.

“We need to think about where we direct growth and encourage it in places that are mutually supportive of transportation issues. If we manage now and work together now, we can make it better,” Stansbery said, but he cautioned: “To date there hasn’t been an urban setting that solved its congestion problems.”

In other words, Stansbery said, these problems can’t be fixed, but they can be managed for the best outcome.