The $100M first phase of the BridgeWay Station project, a new Mauldin town center, is expected to be completed by the end of this year or early next year. 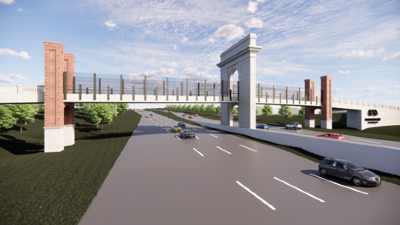 This first phase will include retail spaces, dining and office spaces with multifamily residential units above. The larger development will also include hotels and event/entertainment centers, and a five-acre park once fully completed.

A conceptual site plan shows nine mixed-use complexes along both sides of a main street with retail space on the ground level and apartments or office space on upper floors. It also shows locations for two hotels and a movie theater.

Mauldin resident Ashlyn Bowen said, “I’m excited for the new growth [of Mauldin] and fun events to come.” She is most excited about Poogan’s coming to the Upstate, as she loves visiting and eating at the Charleston restaurant.

“This development is a huge sign of our growth extending outside of just the downtown Greenville area,” she added.

Hughes described the proposed village as an Internet-connected, environmentally friendly place where people could live, work and play without having to drive anywhere in a car.

“We have waited a long time for the first phase to be completed and are excited for it to come to fruition,” said Phil Hughes, president of Hughes Investments.

All retail space within BridgeWay is being constructed with the intention to create visibility, access, walkability and vibrancy, Hughes Investments says. A goal of the design is that visitors and residents will have an opportunity to fully utilize outdoor space and meaningfully cultivate the most successful, safe and highly desired components of a pedestrian-oriented, customer-first community.

A new pedestrian bridge will be an extension of the Swamp Rabbit Trail over Interstate 385 through BridgeWay Station when completed by the end of the year. Greenville’s Prisma Health Swamp Rabbit Trail, a 22-mile greenway system routed between Greenville and Travelers Rest and currently under expansion, will be tied to BridgeWay Station by the pedestrian bridge, which will allow more than a million people who use the trail annually direct access to the station’s shops, restaurants and entertainment. The new bridge will also be illuminated at night for pedestrians crossing during evening hours.

Hughes said BridgeWay Station is a long-term planning project but the current construction of Phase I is the "heart of the project" that took the longest to plan out of the undetermined number of phases of development.

“It has all elements of a traditional downtown without the pain of parking and is an overall experience, a ‘sense of place’, and a great thing for the whole region,” he added.

So why did Hughes choose the Mauldin market over any other city in the Upstate to build this town center?

He said Mauldin is an attractive market for many reasons including there being a six-lane interstate nearby, which is heavy with local and visitor travelers, the form-based zoning is unique in Mauldin, the income level of Mauldin residents is, on average, more than $120k per household within a five-mile radius, which is ideal for retailers, and the city of Mauldin has been accommodating and gracious, making the process more fluid.

“We hope everyone enjoys BridgeWay, as we haven’t seen anyone doing what we are trying to do here,” said Hughes. “This is a hard-to-find opportunity, and we ensure the Upstate community is getting something that is a lot of fun and easy to get to in a beautiful environment. We just want to make our residents happy, and this development is a great formula to do that in a great location.”

From the city of Mauldin perspective, this project is just the beginning of something “grand” happening in Mauldin, said Mauldin Community Development Director J.R. Charles said.

The development will create more than 2,000 jobs and the city is already seeing a significant number of new homes being built.

“This will be a premiere destination,” said Charles. “The city is very bullish about the entire development.”

With Interstate 385 in Mauldin’s backyard, it’s also a desirable location for recruiting corporate headquarters, with this type of development creating a greater marketing opportunity for the city.

“The area lends itself naturally to do so, and we are already seeing growth right now for more developments, as we have an average of 40 commercial permits a month come through,” Charles added. “We are focusing on developments for people to live, work and play all in one.”

Charles said the city is already seeing an uptick in tourist activity post-COVID in addition to the number of people moving to the Upstate every year.

By 2050, the Greenville Chamber of Commerce recently predicted that the corridor between Charlotte and Atlanta will have a similar growth pattern seen between Washington, D.C., and Boston, although it is a denser area.

“They anticipate another 220,000 people will move to the Upstate by 2040, which is 20 people per day over the next 20 years or so,” Charles said. “We are along that growth corridor, and our goal is to bring more people to the area for them to discover how great the Upstate truly is.”

Mauldin Mayor Terry Merritt said at the BridgeWay Station groundbreaking ceremony that this new development, bridge and trail connection will be recognizable as a Mauldin icon for years to come.

If you have a business story idea for Krys, reach out to her at kmerryman@scbiznews.com.