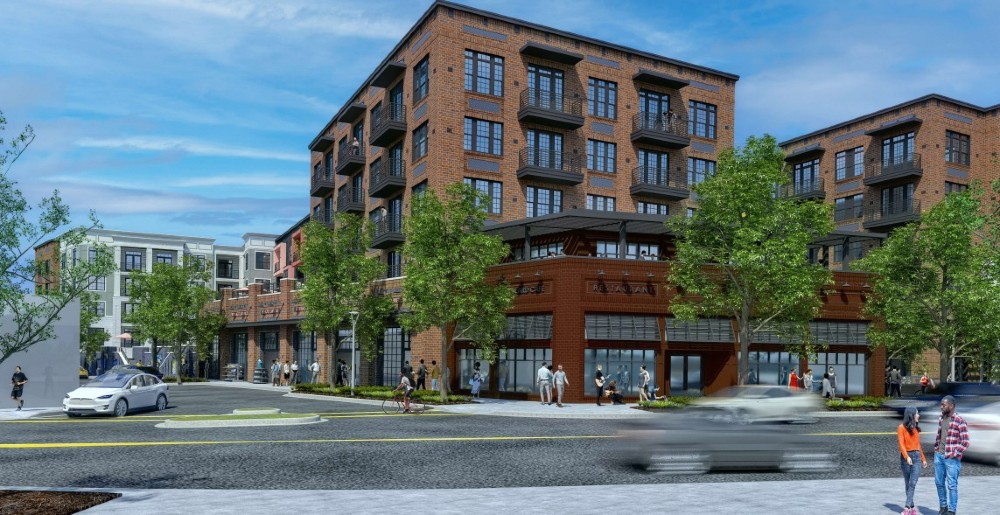 In a final vote, the Greenville City Council voted in favor of approving The Woven development — a project that has caused public uproar, primarily over gentrification and cost-of-living concerns, specifically in surrounding downtown Greenville neighborhoods. Critics are concerned  about how the five-story, two-building project would further change the fabric of the community.

The 214-unit project to be located off Pendleton and Traction streets in West Greenville has been through the city’s approval process for annexation and rezoning for months amid heavy public pushback while the council also heard out those community and council members in favor of moving the project forward.

The final City Council 4-3 vote resulted in the majority in favor of approving The Woven project, following more than three hours of public comments and council discussion at the Jan. 9 meeting.

DeWorken said he voted in favor to push The Woven project forward, because it includes 44 affordable housing units and active retail at the ground level.

However, DeWorken said he maintains “deep appreciation for the passionate advocacy” of those opposed to the project.

After a lengthy process and expressions of strong feelings from both sides of the spectrum, White said at the meeting the he shared concerns about the scale and mass of the project but he hopes the planning commission has it “mostly right.”

“The pedestrian experience I think is still going to be a good one,” he added.

He said when the project was first proposed, they were looking at the entire neighborhood and seeing a disturbing trend.

“We have done a lot of work on affordable housing in West Greenville on the city side, but as things have developed on the county side, we see where this is heading,” White continued. “It’s heading to suburbanized units that are very expensive. We have 55 units (townhomes) in the $600-$700,000s in the pipeline of very expensive housing ready to be built adjacent to this site.”

“There are only two ways to push back against gentrification when you have a fast-growing community, you land bank and (practice) inclusionary zoning,” White added. “We are doing this every time we have a chance to do it. But there is a lack of housing, and people have to have a place to live. I can’t think of a better place in Greenville than this one to put more affordable housing. It’s a win, and I’ll take that win.”

Shelby Dotson, West Greenville resident and one of the owners of the Plush Mills redevelopment, spoke in favor of the project at the meeting.

“I do share many of the concerns of my neighbors, and I actually see this project as a means of addressing some of those issues,” she started. “I love our diverse community, and I recognize the challenges of combatting gentrification. Most of us in this room would want to sell our homes for as much as we possibly can, and they are sold to the top bidder, so the fabric of our community does change one by one, house by house, and no one has to come before City Council when that continues to happen on a unit-by-unit basis.”

She added that this is an opportunity for something different and for a more impactful development as there hasn’t been a project of this scale in the Village of West Greenville in recent history.

“And so, this density allows for over 40 new affordable units,” Dotson continued. “The density both in rooftops and commercial space is imperative to facilitate mixed income housing and to create a more sustainable mass of neighborhood retail to keep local shop owners in business. Woven is a step in the right direction. This area will continue to grow with us or despite us, without a rezoning we’ll likely get some similar projects and individual homes that meet the current zoning but don’t address the need for mixed income housing, and additional neighborhood commercial space.”

Woodfield Development and Seamon Whiteside, the developers on the project, reduced the number of units from 254 to 214 in addition to reducing the height in several places of the project. However, it was not enough for the West Greenville residents who have opposed the project.

Teresa Slack, resident of West Greenville, said at the meeting that this is a neighborhood that should be preserved.

“If City Council allows this to be built in West Greenville, it’s really going to show that they just do not care,” a friend told her, and she didn’t disagree.

Joshua Blankenship, a resident of the Brandon Mill community who also spoke at the meeting, said the Brandon Mill Community Association remains in opposition to this project because of its size and scale, but also “because of what it means to the future” of that neighborhood.

“We’ve heard a lot through this process about what the village business district needs,” he said. “They need Woven, businessowners need more foot traffic to survive, they need more parking, some say they need better demographics in the area. But most of the businesses in the district don’t serve their neighbors. If the business models depend on new developments of the size and scale of Woven and the primarily affluent residents in them, then I humbly suggest that they have poorly chosen their location. What business district in Greenville depends on the traffic of the surrounding homes to bolster their business?”

“Its price point, footprint and ultimate lack of concern for the cultural context around it will only exacerbate the divide we already face, not weave it together,” he said.

White said the city is also working on creating 500 units of affordable housing in Unity Park, which will be the largest collection in the city of Greenville.

Furman University Sociology Department Chairman and Greenville resident of 15 years Ken Kolb said he has studied the city extensively for the past decade, beginning with the fight to restore the Hampton Avenue bridge, and recently published a book on gentrification and the Southernside neighborhood of West Greenville. Kolb shared some of his recent research findings at the meeting.

He said the number of Black residents in the city has declined every year for the past 40 years — a slow and steady decline of 22% over that time. However, the loss of Black residents has been the starkest in Greenville’s historically Black communities, he said.

“In these special emphasis neighborhoods, the Black population has dropped a staggering 53%,” according to Kolb’s study. “While it is true that many Black professionals who could afford to live in the city during this period voluntarily moved away to live in neighboring suburbs, data show that the vast majority of displaced Black residents were priced out.”

As home values and rents rise, the average Black family in Greenville can no longer compete for housing, he continued. This is because the city of Greenville has one of the most extreme white-Black income disparities in the entire Southeast region.

“Two decades ago, the city of Greenville made a promise to its special emphasis neighborhoods, to protect them from development they thought was not in character with their history and community values,” said Kolb. “You’ll need to make bold decisions to ensure that our city’s revitalization is shared equitably among all, not for just those who can afford it.”

There is a point when a wire is tripped, and a project loses economic viability, said Woodfield Development Partner Brian Schick at the meeting in response to councilmembers requesting to further downsize the project.

“But if we can’t attract lenders, investors, to provide a yield, the project can’t happen and none of these public benefits will happen — the park, the affordable housing, everything we strive to put into Woven,” Schick added. “Even at 214, we are stressed.”

Gibson, who voted against the project, said at the meeting he feels there is another issue at play when it comes to a response from a developer like this.

“I believe this is an institutional project as opposed to a local and boutique project,” he said. “This is a project that the developer is going to take, looking at not just building it but being able to sell it to somebody else who lives out of town to come in and run it.”

Although he doesn’t necessarily have an issue with that business model, Gibson added, but for this particular site, “we cannot be bound by the desire to sell to some other out-of-towner when it comes to building a project that looks right and fits on that particular site.”

SC Biz News reached out to Woodfield Development about the estimated total project cost but had not received a response at publish time.

Construction on the project is anticipated to begin by the end of the year.