The customer’s first decision gets things going. White or whole wheat, a Your Pie employee grabs a ball of dough and starts working it. The first pizza maker in a line of them flattens and tosses and stretches the dough onto a wooden board and then slides it to the next pizza maker.

At the Clemson store, the customer then steps to the right, usually sideways, to choose a sauce, and right again to choose or pass on meat and cheese. Right again, and it’s time to choose from a selection of toppings from olives to onions.

It’s the same side-shuffle step that customers are accustomed to taking at sandwich shops like Subway or Mexican restaurants such as Chipotle. Some in the food industry call it the Subway method or Chipotle method because of the wide reach of those two chains. 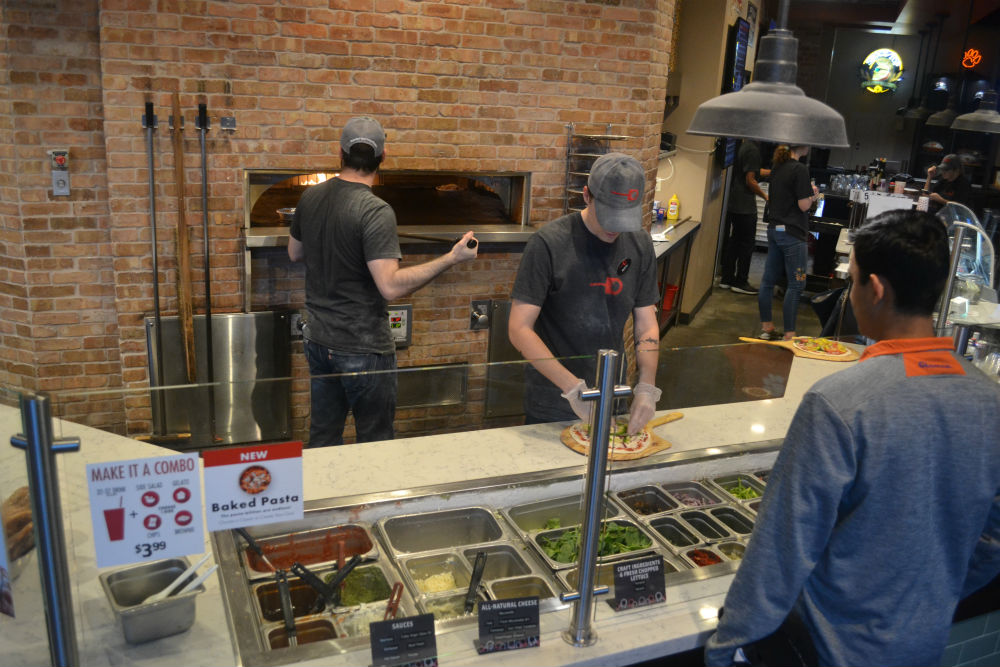 Your Pie, which lays claim to adapting the method for pizza, calls it “down-the-line” preparation, said Clemson franchise owner Doug Zirbel, who opened his restaurant after a long career with Kimberly Clark.

It’s an efficient way to run a restaurant, according to Mike Kern, co-owner of Rapid Fired Pizza in Spartanburg. Significantly, it also effectively doubles the number of meals a pizza restaurant can tackle.

Kern, who owns franchise rights to Rapid Fired Pizza for the Carolinas along with Chip Hurst, said pizza didn’t make a good business lunch because it took too long and the customer ended the meal with too much leftover product. Pizza by the slice may be the lifeblood of day-long dining in New York, but it was rare in most of the rest of the country.

“When you look at the restaurant landscape in terms of market segmentation over time, pizza had become a fairly dinner-specific option, dominated by delivery or carryout and pickup,” said Kern, whose long career in the restaurant business included a stint as CEO of Long John Silvers. Despite being left out of two of the day’s three meals, demand for pizza grew consistently for 40 years, he said. It was the number three choice for type of food behind hamburgers and sandwiches. 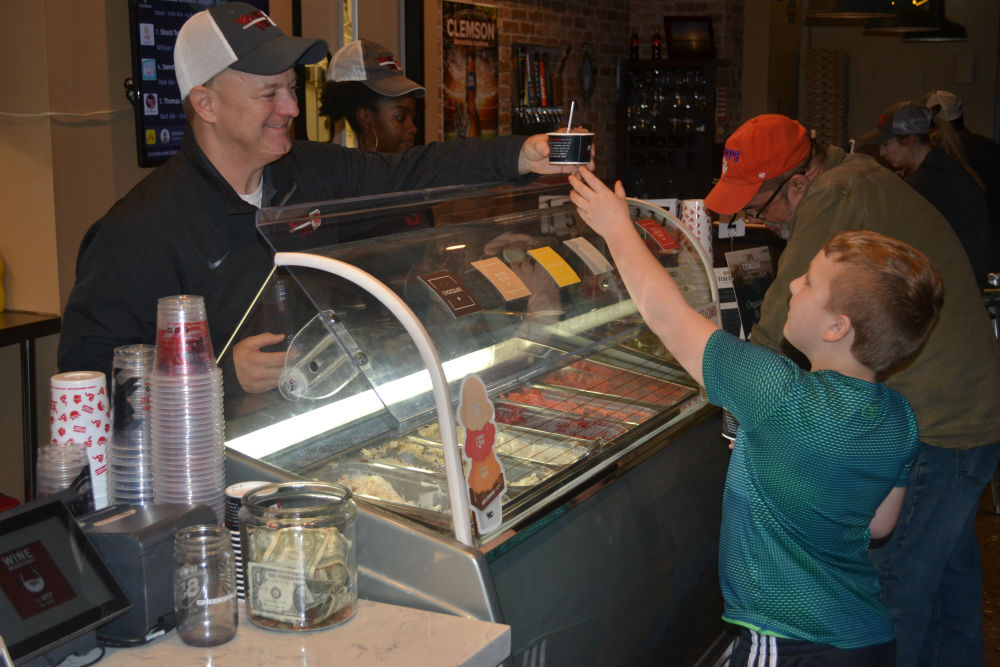 Down-the-line pizza changed that. At Your Pie, the pizza is brought to your table after about four minutes in a gas-fire brick oven. Restaurants that don’t hand-throw the crust move a little faster still, and cook the pizza in three minutes.

“By the time a customer chooses a drink or a craft beer and pay for their meal and sit down, the pizza is there,” said Zirbel. About a dozen companies out there are using the concept, but Your Pie rises to the handcrafted level by preparing the dough by hand each time and maneuvering it around an open oven with a traditional long-handled pizza peel.

Your Pie was started in Athens, Ga., after founder Drew French and his wife visited Italy on their honeymoon. He was impressed with the crispy crusts and other flavors that came quickly from brick ovens. He launched his first restaurant two years later.

That was 10 years ago and about the same time Kern, who also spent part of his career in the KFC C-suite, wanted to do something different. He poured a career’s worth of insight and expertise in fast food to find his place in a new space — the fast casual experience that delivers food quickly and consistently, but in an environment appreciated by an American public with rising expectations for quality and experience. Technology also came along that made a quick pizza possible. Kitchen design and technology coming along during those years also helped make quality fast pizza possible, he said.

When Kern figured out that pizza would be his new space, he set out to research who had what he thought was the best fit for him. He did it the old way.

“I flew around the country for several weeks and ate a lot of pizza, trying to find a restaurant that fit,” he said. “I identified Rapid Fired as the best, at least the top of my scorecard.”

Key for him was a concept that combined a tasty product that could be made quickly while satisfying his career-borne inclination for efficiency.

“The basic layout and flow and purely back-of-house functions work. This concept has it figured out; it’s geared for consistency,” Kern said. “The customer, more than anything, wants to know if they see the name on the door, that they’ll have the experience they expect.”

Kern said restaurants sometimes fail not because of what they produce, but what kind of toll that production puts on the staff because of poor design.

“The amount of space (for down-the-line pizza) is very low,” he said. The number of positions needed is very economical and that’s important. Ergonomics is part of the success of long-term restaurants that lead to a consistent outcome.”

What mattered in the end was customer reaction. Your Pie was an immediate hit in its college town, Zirbel said. When offered a half-price special recently, customers lined up out the door and down the sidewalk.

Kern said a key difference between fast-casual pizza and the fast food chains of his past has been the use of social media to carry on an almost-constant dialogue with his customers.

“Social media surrounding the customer discovering this kind of pizza was helpful and validating,” he said. “We had and still have customers that were excited and wanting to share. That told me there was something to this. They post photos and talk about their response. There’s a running thread of engagement. As owners, it’s very helpful to us.”

Kern said there are about 1,000 restaurants representing about a dozen brands making pizza using the down-the-line concept. It’s hard to say how many the market can take, but he thinks at least a few thousand more before they start getting in the way of one another.