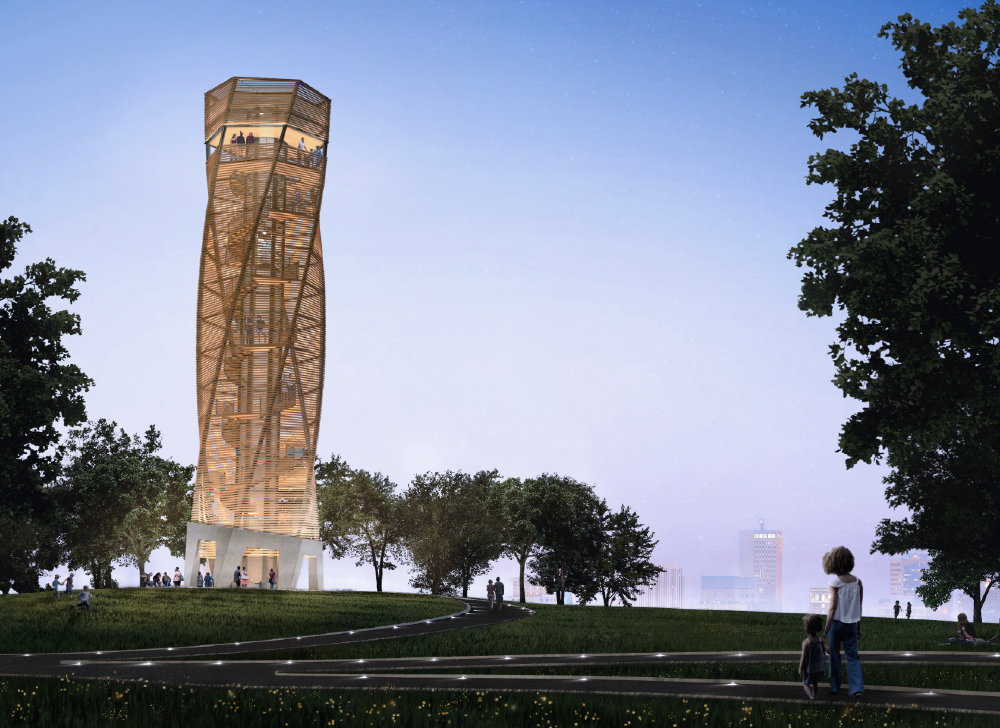 A $1 million donation from longtime Greenville philanthropists and entrepreneurs is one of Unity Park’s largest donations to date — a gift that led to the naming of a tower that will be built at the park.

The city of Greenville hosted an event at Avenue on Thursday to recognize Thomas and Vivian A. Wong’s donation to the Honor Tower at Unity Park, which is a 125-foot structure that will be dedicated to military veterans and first responders.

Greenville Mayor Knox White announced the donors and their donation at the ceremony, with more than 100 guests in attendance, also unveiling the tower’s official name: The Thomas and Vivian A. Wong Honor Tower.

Vivian Wong and her daughter, Madina Cauthen, were honored at the ceremony. Unfortunately, Thomas Wong died following a COVID diagnosis while Vivian Wong lost her ability to speak from the same debilitating virus.

“Being American really meant a lot to them,” said Cauthen. “And I think the vision behind what the Honor Tower stands for was important to them. Greenville needs a place where they can honor first responders and veterans, and it will be a place of honor.”

The total cost of the tower project is $11 million — $5.5 million in private funding, and $5.5 million in city funding. There is no set date on when work will begin on the project.

The Wongs moved to South Carolina from Hong Kong nearly six decades ago.

During this time, they had built a restaurant business from scratch, starting in Greenville with the first Dragon Den location, and then became successful businesspeople by investing in hotels, industrial projects and international business ventures in the city.

“They channeled their success into the community and played a pivotal role in changing the face of downtown Greenville,” said a Hughes Agency new release. “They have given generously over the decades, including donating the land for the Cancer Survivors Park and the Patewood Medical Campus.”

“Vivian and Thomas Wong’s story epitomizes the American Dream,” said White in the release. “As immigrants in Greenville in the 1960s, they embraced our city – integrated, built businesses and gave back. They seized every opportunity to be successful and contribute. Their philanthropic and community spirit ties in beautifully to what we’re building at Unity Park and the Honor Tower which sits at the heart of it. We are truly grateful for their generosity.”

The Honor Tower will be constructed just south of the Reedy River, between what used to be Mayberry and Meadowbrook parks. The site location — between the two historically segregated parks — underscores the park’s symbol of unity.

“When Mayor White approached Vivian to share the vision for the Honor Tower, there was no question she was committed,” the release said. “After surveying the sponsorship opportunities, she was quick to pledge $1 million for the tower.”

Mary Duckett, Southernside Neighborhood Association president said at the ceremony when it comes to the city’s first responders, it’s important to remember they are out there every day protecting the city and its residents.

“The officers get out there every day, should we not want to have something in our city to honor them when they do so much for us?” she said.

Duckett also told the story of when, in the very place this tower will stand, the days of segregation between Meadowbrook and Mayberry Parks occurred.

“The last five letters of ‘community’ is unity,” she said. “So, this day is a great day not only for me but for future generations to understand the meaning of being unified as a community.”

The diversity seen in the park since its opening has continued every week, and it’s a wonderful thing to see, said White.

Other Honor Tower at Unity Park contributors include Sharon and Heather Carlton, Erik Weir and AT&T.

The 60-acre Unity Park on the west side of Greenville includes the protection and enhancement of the Reedy River and restoration of the historic Mayberry Park, along with playgrounds, pedestrian bridges, walking trails and welcome center. Its design follows more than a decade of community engagement, including meetings with the surrounding neighborhoods.

“In doing this, I think we are all recognizing what we mean to each other (as a community),” said WYFF 4 News Anchor Jane Robelot at the ceremony. “That’s what Unity Park is all about. It’s such a gift to our whole community. Unity Park is where the City of Greenville chose to rewrite decades-old wrongs.”