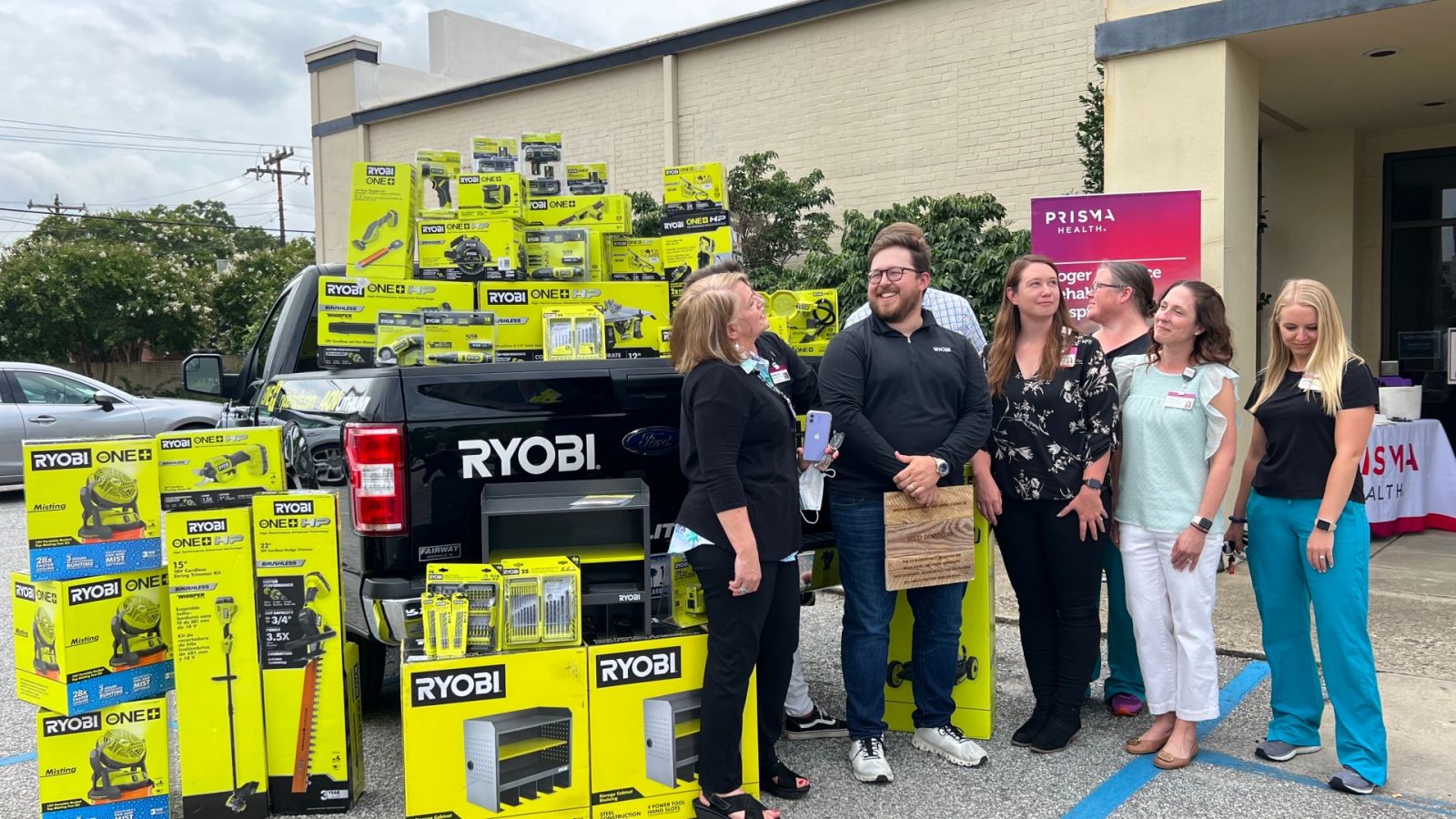 When a 32-year-old Ryobi Tools employee suffered a hemorrhagic stroke last August at his home, he was sent to the Prisma Health Roger C. Peace Rehabilitation Hospital to begin his road to rehabilitation.

The treatment saved his life and allowed him to regain his motor skills and other general life skills, according to a news release.

But that wasn’t the end of the story for Anderson’s Ryobi Tools team or DiNunzio’s career at the plant.

DiNunzio continued to have permanent vision loss in his right eye and motor weakness in one leg, but in March he was able to step back into his role as the company’s full-time outdoor products merchandising coordinator, the news release said.

“The support that I received from not only my team, but the entire company throughout my recovery was extremely uplifting,” DiNunzio said in the release. “My team of therapists and doctors at Prisma Health helped me regain skills to move forward with my life at home as well as the skills to get back to work.”

Once DiNunzio returned to work, Ryobi Tools, a division of TTI Power Equipment, gave more than $4,000 worth of their products, including tools used for woodworking, jewelry-making, gardening and landscaping, to the program that aided DiNunzio.

“At the time of his stroke, Nico’s health was the only priority,” Jess Wright, vice president of brand marketing for Ryobi, said in the release. “Supporting him through his recovery and knowing he was getting the best care possible at Prisma Health was reassuring for our entire team. Having him back in the office is a testament to the care he received, and he is an inspiration to our entire business. Being able to give back to those who poured so much into helping Nico is an honor.”

The Roger C. Peace Rehabilitation Hospital and West End Co-op sells some items made by patients, including jewelry, cookies and screen-printed art at http://prismahealth.org/rcp.

“In some cases, it’s a matter of patients practicing with the equipment; in others, it’s learning a whole new way to handle the equipment or actually adapting it to make it more user friendly,” Kimbo Bridges, program supervisor at the West End Co-op, said in the release. “Other patients may use these type tools in their actual jobs and so this helps them return to work faster and gives that patient a huge motivational boost in knowing his or her rehab has purpose and value.”

The donation is not the first contribution TTI Power Equipment has made to Prisma Health. In 2022, the company raised $20,728 for the health care network’s annual Dragon Boat Upstate Festival as a sponsor and race participant. Over the past three years, the company has donated $40,000 to the Prisma Health Cancer Institute through its participation in the Dragon Boat Race.

“We’re incredibly grateful to Nico and Ryobi for paying it forward and helping us do even more to fulfill our incredible mission at the West End Co-op and through all Roger C. Peace Rehabilitation Hospital’s inpatient and outpatient services,” Elizabeth DuBose, the hospital’s associate administrator, said in the release.