Economists and developers have said that the uncertainty surrounding tariffs and trade issues are stalling projects and economic growth. Jim Newsome, president and CEO of the South Carolina Ports Authority, said the same can be said of the port operation.

“We need to hope the trade thing gets settled. I don’t have any doubt that it will,” Newsome said recently during a visit at the Inland Port Greer. “We’ve been trading freely for 200 years. I don’t think that’s going to change. But uncertainty provokes risk mitigation in the supply chain.”

Newsome said, however, that there really isn’t one answer on trade imbalances, that it needs to be looked at segment by segment. 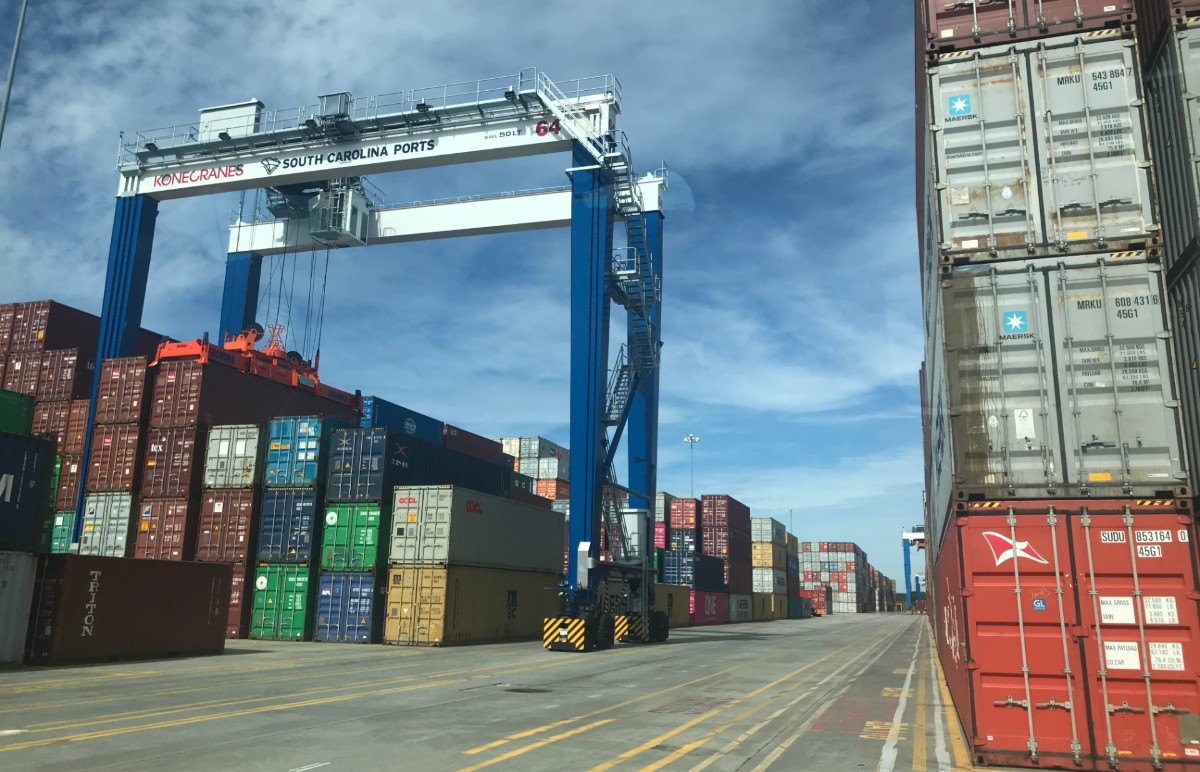 “Retail manufacturing is not coming back to the United States. it’s simply not,” he said. “So, the question is if you don’t want to manufacture in China where are you going to do it?”

Newsome cited various media reports about outsourcing to Vietnam, adding that in the last six months, “if everybody who told me they were going to put a plant in Vietnam actually does it, it will take a year to get on a ship.” He said retail will continue to be sourced from overseas; it’s just a question of where.

Sixty percent of trade in Asia is with China, and Newsome said that can’t be changed overnight.

“On the other end of the continuum is agriculture. The minute tariffs were placed on agriculture, exports stopped,” he said. “You can source crops like soybeans in Brazil, Australia, wherever. Ag exports went down fast.”

Newsome said the wildcard in the trade uncertainty is the automotive sector.

“That’s where I think we’re very dependent because the reality of life is you can build a $60,000 car anywhere in the world for less than $1,000,” he said. “The value of a car versus what it costs to ship it anywhere is enormous. Automotive is a true global sourcing operation.”

When asked if South Carolina, a strong export state, is positioned to weather the trade uncertainty, Newsome said it was a question of timing.

“Short term, yes we can weather it,” he said, adding that the longer there is uncertainty, sophisticated companies will make decisions to change things. Some companies are more able to do that than others. And the auto industry, he said, is more flexible over time because it is a global sourcing business.

“I think everybody believes in free trade. We can’t make everything in America. There’s no workforce,” Newsome said. “We’re fully employed today. If you want to put another 10,000-person manufacturing facility in one of the southern states, you’re going to have trained, skilled workforce issues.

“I have to believe that this can’t go on for a long time,” he said of trade disputes.

The ports in South Carolina continue to be busy, Newsome said, and that includes an expansion of Inland Port Greer, which received a $25 million grant from the U.S. Department of Transportation to help do it.

The Upstate Express Corridor Capacity Expansion Project will expand the inland port, extend the lead track and lengthen the rail line to approximately 15,100 feet. The expansion includes acquiring additional equipment for the handling, loading and unloading of containers and the paving of up to 40 acres.

BMW, Adidas, Dollar Tree, Michelin, Techtronic and Eastman Chemical are among the large manufacturers who use Inland Port Greer.